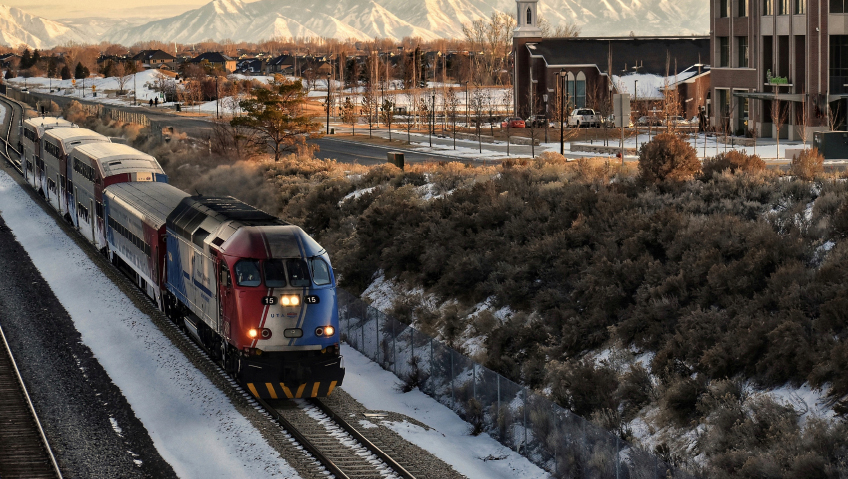 Since 2000, Lehi City, Utah, the eighth fastest-growing city in the U.S., has been pioneering Utah’s future as the preferred home for tech giants. The city’s great lifestyle, above-average salaries, and abundance of housing come wrapped in the natural beauty of lakes, rivers, and mountains.

Back in 1984, when the murals painted on the silos of the Lehi Roller Mills (a family-owned flour mill founded in 1906) were featured in the movie Footloose starring Kevin Bacon, the site was surrounded by open fields.

The Lehi City of those years is remembered by Marlin Eldred, who grew up 15 miles away and has been Lehi’s director of economic development for the past five-and-a-half years, as a “sleepy little town with only two flashing lights.”

From ag to tech
Incorporated in 1852, Lehi’s economy was based on agriculture, and it stayed that way for 148 years. But with the arrival of Micron Industries, everything changed, and Lehi was catapulted from the 19th century directly into the 21st, as the economy transitioned from agriculture to technology.

As Eldred explains, some 25 years ago Micron Industries approached the State of Utah to create a microchip fabrication plant and Lehi worked with the company to build a massive, 2.5 million square foot building. Then, to everyone’s great disappointment, “they mothballed it. But three years later, in 2000, Micron returned, put in equipment, hired staff, and that became our nexus.”

Micron acted as a catalyst, attracting other high-tech companies to the newly-dubbed “Silicon Slopes,” which resulted in a dramatic increase in population.

In 2008, Adobe Systems built one of its U.S. headquarters facilities, now home to 1,800 employees, in Lehi. The focus there is on engineering, product development, and other operations associated with Adobe Marketing Cloud.

High-end comes to Lehi
For the last 14 years, Eldred says, “We’ve been able to attract more and more high-end tech companies.” These include Snapchat, Oracle, InfusionSoft, Workfront, Vivint Solar, Agel Enterprises, DigiCert, Jolt, ProPay Inc., and many, many others.

Microsoft, too, has brought over an engineering department specializing in the next version of Microsoft Desktop Optimization Pack (MDOP), while Ancestry has moved its headquarters from Provo to Lehi.

In addition, a roll-call of multi-level marketing companies such as XanGo, Younique, Nature’s Sunshine Products, and Young Living has put Lehi in a unique position to lead the way in the digital economy.

Speaking on behalf of Young Living Essential Oils, Acting President Ben Riley says that the company “has been fortunate to be headquartered in Lehi since 2003. In 2017, working closely with City leaders, we decided to build our award-winning global headquarters along the Silicon Slopes corridor. We are inspired to be surrounded by some of the most dynamic companies in Utah and appreciate the energy and momentum Lehi affords,” he says.

“We are proud to continue our partnership with Lehi City on many enhancements and improvements for both the business community and residents alike, and look forward to being a part of Lehi’s continued economic growth as a premier business, technology, commercial, and essential oil center for many years to come.”

This past October, Micron sold its entire fabrication plant to Texas Instruments.

“We’re very excited,” Eldred says. “Texas Instruments has more than 40,000 customers and is completely diversified, serving many different industries. This fabrication plant will be utilized and continue to grow in the future.”

As it turns out, the staff at Texas Instruments is equally excited to be in Lehi.

Living the life in Lehi
Plant Manager Trevor Bee of Texas Instruments says, “I’ve been working in Lehi since 2006 and have watched this area thrive with the tech sector in recent years. People want to live and work in Lehi because there are many career opportunities in our relatively small geographic area, which has maintained a strong sense of community and support. The tech companies here realize how fortunate we all are to call Lehi home, and we support each other’s success.”

Eldred takes up the narrative, saying, “We got that fly-wheel started and landed our first, second, and third businesses, and we’ve got to the point where a lot of tech companies in Utah are looking at Lehi as the place to locate because we have such a high concentration of tech companies. What I’m finding now, is that I spend very little time doing large business recruitment.” Instead, he says, his present focus is attracting employees to relocate to Lehi, to work for the tech companies where the average annual salary is $95,000 to $120,000.

What’s also needed are more medical, financial, legal, and educational professionals, and a variety of retail establishments to support the growing population, to offer the lifestyle young professionals and young families are looking for, and to make Lehi fully self-sufficient.

Just 30 miles along the freeway from Lehi City is Salt Lake City, with its international airport, professional sports, and cultural activities.

Salt Lake City is home to the NBA Utah Jazz, as well as Major League soccer and rugby teams. It’s also home to the Utah Symphony Orchestra, professional theatre and dance companies, and the famed Tabernacle Choir at Temple Square.

Also within a short drive are three major universities: Brigham Young University, Utah Valley University, and the University of Utah, making all the amenities of an urban lifestyle accessible to Lehi residents.

Turning to nature
Lehi stands in picturesque surroundings. The Jordan River to the west, Utah Lake to the south, Wasatch Mountains to the east, and the White and Oquirrah Mountain ranges to the west invite outdoor activities such as hiking, mountain biking, fishing, hunting, camping, and skiing.

In addition, Lehi maintains a recreation center with indoor and outdoor pools. Lehi truly combines the best of both urban and rural living in its own unique way, appealing to its young demographic where the median age is 24.5 years.

The city offers a variety of housing solutions, Eldred says, ranging from very nice apartments and townhouses to starter homes with three bedrooms and two bathrooms priced around $470,000, and executive homes priced at $1.1 million located in the canyons or on the mountainside.

Primary residences are taxed at only 55 percent of the assessed value. According to the city’s official website, “Maintaining an average rate for many years, property tax revenues have stayed relatively stable. When compared to other cities in Utah of a similar size, Lehi has maintained a relatively average property tax rate for many years which has helped to mitigate the need for a significant rate increase in any given year.”

Currently under construction is the Primary Children’s Hospital, only the second dedicated children’s hospital in the state. It will be a full-service hospital, providing heart surgery and chemotherapy.

To improve communications, Lehi announced a partnership with STRATA Networks at the end of 2021 to build an all-fiber network throughout the city. Over three years, the agreement will bring some of the fastest internet speeds in the country to homes and businesses within city limits, adding just one more reason to live and work there.

Meanwhile, Eldred shares news about “a $500 million project that has taken almost three years to get across the finish line. It will include multi-family housing, commercial office space, and a retail component,” he says.

“We are trying to get a mix of high-end restaurants and major brand names that will draw traffic, but we also want smaller independent boutique-style stores, because we want smaller stores to stay viable and become profitable. I’ve been spending most of my time recently focusing on the retail sector, so our residents have a place to shop where they live and work. You can’t pigeonhole residents and say they are all going to shop in one kind of store, so we need a breadth of retail to appeal to both a wider population and niche markets.”

Eldred, who created two economic development courses for the Utah Valley University branch in Lehi, where he teaches, says that every community’s economic-development effort would like to claim to be the best in the U.S.; however, that is perhaps something that Lehi can do.

“The reality of what sets Lehi apart from all of those others, is the stable local government, along with the tech and business community we have created here, and the opportunities for employment, quality of life, and housing. We have built that three-legged stool and Lehi has become a gem that people look at and ask themselves, ‘Why aren’t we locating here?’”