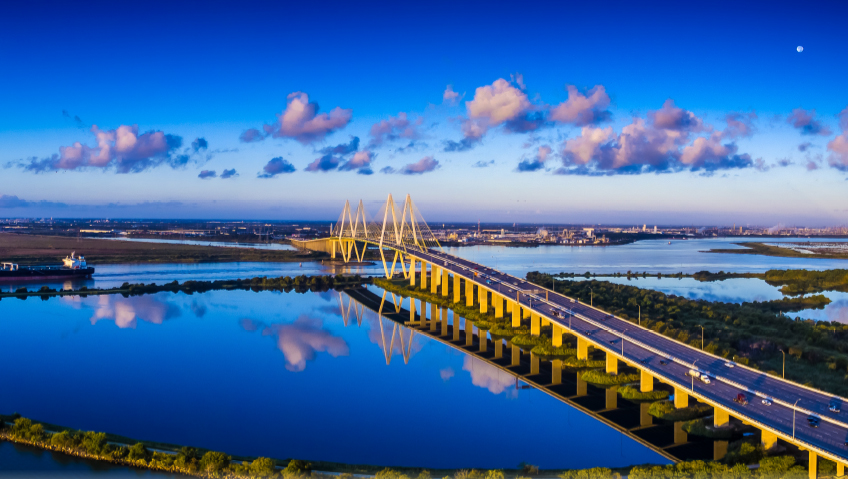 The City of La Porte is a hidden treasure nestled along Galveston Bay. The slower pace of life in this friendly, tight-knit community feels light years away from nearby Houston. “You truly don’t realize you’re fifteen miles from downtown Houston, the fourth largest city in the nation,” says Assistant City Manager Matt Daeumer. “We’re a gem on Galveston Bay that people don’t know about. And we like it that way because it’s a quiet and comfortable place to live.”

But don’t be fooled by the small town vibes—this community of 35,000 people is full of big city opportunities. “We’re in close proximity to industry,” Daeumer says. “There’s a great opportunity to get the high-paying career and job. And we have a relatively low cost of living compared to other cities in the area.”

Situated where the Houston Ship Channel meets Galveston Bay, La Porte enjoys a prime location for industry. “We actually sit between two of the Port of Houston locations, which is one of the largest ports in the nation as far as tonnage and it is the largest port on the Gulf Coast. So there’s lots of commerce.”

Local industries include plastics manufacturing, refineries, pharmaceuticals, and more. The city government works closely with these businesses to promote employment opportunities. “We have partnerships with them through the Chamber of Commerce and Workforce Development,” Daeumer says. “We’re all looking for a way to improve our residents’ skill set in order provide a qualified labor force.”

A key component of the second largest petrochemical cluster in the world, La Porte has a particularly strong relationship with the petrochemical industry. A strategic combination of resources within the area attracts multinational petrochemical, petroleum, and specialty chemical companies based around the globe. These well-known corporations use the area’s natural gas and oil to create materials used in everything from electronics, synthetic fibers, soaps, detergents, and building supplies to plastics, lubricants, cosmetics, fertilizers, pesticides, paints, and countless more necessities.

Occidental Chemical Corporation runs a large operation in La Porte, where the global energy leader processes Vinyl Chloride Monomer (VCM) at its Star Certified facility. VCM is mainly used to manufacture the lightweight, durable plastic polyvinyl chloride (PVC), which is used in everything from window frames to pipes. Dow is another industry leader in La Porte. The company launched its operations there in 1985 near the Houston Ship Channel and the historic battlefield where Texas won its independence from Mexico. The massive facility covers 139 acres, produces one billion pounds of products each year, and provides jobs for 225 Dow employees and 150 contactors. An international leader in materials, chemicals, and solutions, Belgium-based company Solvay is yet another global player operating out of La Porte.

La Porte is serious about economic growth, and the city provides a variety of incentives to attract and retain businesses and to improve the community. “We try to keep robust Economic Development programs going,” Daeumer says. “We offer incentive grants along with enhancement grants.” For example, businesses can get a grant for beautification efforts that positively impact entire neighborhoods. “If you spend $100,000, we can match up to $50,000 to help get back some of your expenses.” Other incentives are available for new or expanding businesses, including ones specifically based on how many jobs new or expanded business will create.

The community also boasts a high-ranking school district, along with higher education and job development opportunities. “We border a College District, so there’s an opportunity to expand your education at San Jacinto College. And they have partnered with our high school as well in developing careers in the maritime industry, the process industry, and so on.”

In addition to a low crime rate and affordable housing, the community boasts a robust park system as well as thirteen miles of walking and cycling trails. “It actually connects the majority of the parks in our city,” Daeumer says, “so you can get to those parks without having to get on any major highways.” There is a large Little League Baseball park that hosts regional tournaments as well as a softball complex. Golfers flock to the Bay Forest Golf Course, a highly rated, city-owned course. The city also has a wave pool complex and multiple community pools and splash pads. Sylvan Beach, the only public beach in the County, is a key local attraction.

Founded way back in 1892, La Porte enjoys a rich history and a number of historical attractions. The San Jacinto Museum of History, San Jacinto Monument, and San Jacinto Battleground commemorate a decisive, 18-minute Texas battle for independence that changed the course of history in 1836. Founded in 1897, the Houston Yacht Club—the oldest yacht club in the entire state—is still a fixture in La Porte as well.

The city is making a concerted effort to maintain and improve its historic buildings and neighborhoods, particularly along Main Street. “We just partnered with a property owner who rebuilt the old bank building that has stood there forever,” Daeumer says. The historic structure now has a second life as the home of the Chamber of Commerce, an ice cream shop, and apartments. And there’s more to come. “We just entered into an agreement with a developer to build a project next door that will have five retail spaces on the first floor and five luxury apartments on top. And it’s going to include a pizza restaurant and a tapas and wine bar. So we’ve got some good things going on.”

In yet another partnership, the city is working with a developer to create an entertainment park that will host food trucks and live music. And an additional new park is nearly finished. Located at the end of Main Street, it “will be the focal point of our downtown.”

A place like La Porte attracts newcomers and fortunately, there are new housing developments to meet that need. “We’ve had some substantial growth,” Daeumer says. Morgan’s Landing, a sprawling, 600-plus master-planned community will be finished in about a year. “That significantly increases the opportunity for new homes in La Porte.” A couple of new luxury apartment projects are underway, including one near the baseball complex. The housing development Hawthorne at Bay Forest, which is located on the city’s golf course, has recently been completed.

This hidden gem of a community has a wealth of opportunities and a long, storied history stretching back 130 years. “We celebrate living in La Porte every day because we are rich in history and built on community,” Daeumer says. When asked what’s next for this historic city, he adds, “We will continue to thrive as a community, and continue to make La Porte one of the best places to live on the gulf coast.”