Game On and Keep Cool – Building a Better, Cooler Computer 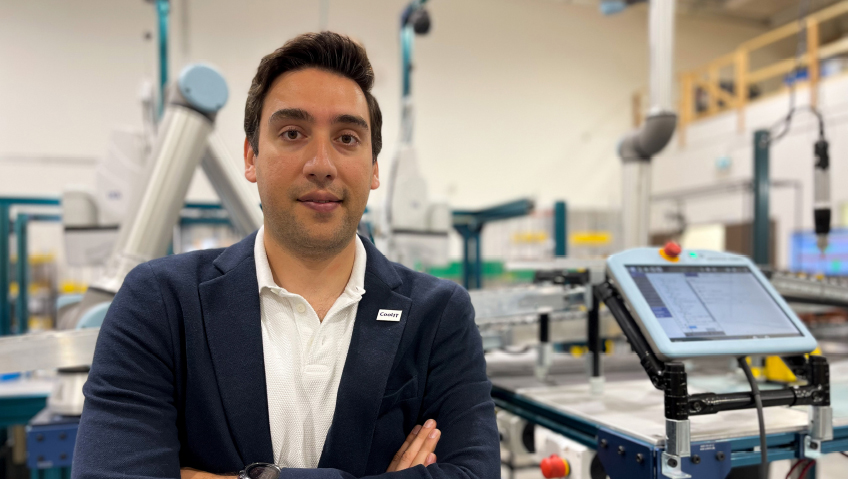 Keeping your cool doesn’t only apply to your temperament, especially when it comes to gaming. For CoolIT Systems (CoolIT) it means keeping high-performance desktop computers perfectly cool more efficiently than traditional air-cooling methods are capable of.

CoolIT patented its Split-Flow coldplate technology in 2009, giving the company the unmatched cooling capacity required by the desktop gaming industry. As the company grew, so did the need for DLC in the data center and high-performance computing (HPC) industries.

“Supercomputers became faster and more powerful, thus hotter due to all the computing power,” says Hamid Rafiei, Vice President of Manufacturing. “Designs of server boards and server racks became denser and more packed with components to increase the amount of computing power available in a smaller footprint.”

When traditional air-cooling methods started struggling to keep up with these servers’ performance requirements, CoolIT launched into the data center and HPC industry with its first prototype data center cooling system in 2010.

Today, CoolIT Systems is the global leader in scalable liquid cooling solutions for the world’s most demanding computing environments.

“In the desktop enthusiast market, CoolIT provides unparalleled performance for a range of gaming systems,” says Rafiei, adding that in the enterprise data center and HPC markets, CoolIT partners with global leaders in server design such as Dell, HPE, Gigabyte and Supermicro to develop the most efficient and reliable liquid cooling solutions for their own leading-edge products.

Through its modular, Direct Liquid Cooling technology, Rack DLC™, CoolIT enables dramatic increases in rack densities, component performance and power efficiencies, with its Rack DLC™ technology providing cooling for systems such as Frontier, the fastest, most energy-efficient, and first-ever exascale HPC system in the world.

Using North American and Asian manufacturing sites to produce its products, CoolIT currently employs more than 190 personnel, with headquarters in Calgary, Innovation Centers in Canada and Taiwan, and sales teams located around the globe.

Other notable milestones during its history include moving to a larger 7,000-square-foot office location in 2007 and expanding again by 1,500 square feet to accommodate a growing engineering department in 2008, followed by the move to an impressive 30,000-square-foot space in 2014.

Revenue surpassed $66 million in 2019, followed by $100 million in 2021, a 260 percent increase over 2018. More recently, the company announced new strategic partnerships with nVent, launched Innovation Labs in Canada and Taiwan, and in 2022, surpassed 80 filled patents.

CoolIT has also been investing significantly in its automation line. Since 2019, the company has expanded by 10,000 to 13,000 square feet every year, and with the help of a scalable labour force and investments in automation, this has produced a fivefold increase in production capacity since 2019.

In 2021, CoolIT’s first automated assembly line was installed and commissioned in its North American manufacturing plant in Calgary, with design, deployment, and integration of the automated line executed entirely by CoolIT’s manufacturing team. This automation utilizes a variety of robotics systems from collaborative robots to pneumatic systems.

“The automation systems deployed give high control over the manufacturing processes, from applied torque control to speed control for various operations,” says Rafiei. “The built-in quality check within the system includes automated segregation of parts, which improves product quality and increases throughput.”

Automation up, jobs up

CoolIT has also invested generously in developing and attracting automation experts to grow its manufacturing capabilities, he adds. The company is proud of the jobs it has created for the North American technology and manufacturing sectors, its own headcount growing by more than 80 percent from 2019 to 2022, with manufacturing engineers, technicians, and automation experts involved in industry-leading, exciting and productive operations.

Like many other companies in the high-tech industry in the past few years, CoolIT has suffered from a continuing shortage of electronic components and the long lead times of semiconductor components. The increased logistics lead time during the COVID era has been another challenge the company has faced, with ocean transit times increasing significantly in comparison to pre-pandemic.

“CoolIT has been very successful in managing these challenges and hit all-time revenue records after COVID,” says Rafiei. “This is due to the agility and capability of CoolIT’s engineering team to identify an array of alternative components and designs. These alternative components are then diligently and successfully qualified for implementation into CoolIT’s products.”

The company’s Supply Chain team has also been very successful in securing safety stock of long-lead-time components, enabling the production lines to continue to run at high capacity, he adds.

This impressive company also differentiates itself from competitors in other essential ways. Notably, CoolIT Systems owns more than 80 patents in direct liquid cooling (DLC) hardware, software, and control systems, including one key technology—the patented Split-Flow coldplate—which provides the highest thermal efficiency in the industry and can capture high heat-loads from the electronics it’s cooling.

“This key technology is central to the CoolIT product ecosystem and has allowed the company to set the standard for heat capture capability and reliability,” Rafiei says.

“The Coolant Distribution Units (CDUs) and Reservoir and Pump Units (RPUs) also contain proprietary and industry-leading hardware, software, and control systems that cool and manage the liquid flow to and from DLC-enabled servers.”

What’s more, recent investments in robotics and automation as well as automation engineers, specialists, and maintenance technicians give the company the flexibility and expertise in-house to deploy very sophisticated and complex automation systems in all areas of manufacturing.

The automation capabilities can quickly meet production ramp-up requirements which enables scalability as well as repeatability and reliability. CoolIT has invested in growing its expertise in automation and relies fully on internal resources to develop its automated solutions for manufacturing lines.

“CoolIT is not only the innovation beacon of the advanced cooling industry but also prides itself in being a team of problem solvers and innovators,” says Rafiei. “CoolIT’s dedicated and passionate expertise is found across all teams, especially among product development, project management, manufacturing and services.”

The product development team includes an R&D team focused on qualifying next-generation technologies, design engineers who work directly with customers to ensure their products meet customer requirements, and test engineers who verify and validate the performance and safety of new products.

All of this is made possible in CoolIT’s Innovation Centres currently located in Taiwan and the newest, the 13,000-square-foot Liquid Lab™, based in Calgary. The Liquid Lab gives engineers the ability to prototype and rapidly iterate ideas, while 3D printers, a skiving machine, lathe, and multi-axis CNC give engineers access to rapid prototyping tools that significantly shorten the product development cycle.

“All of these contribute to CoolIT Systems being the global leader and number one trusted source for robust, refined, and reliable manufacturing of DLC and advanced cooling products,” says Rafiei.