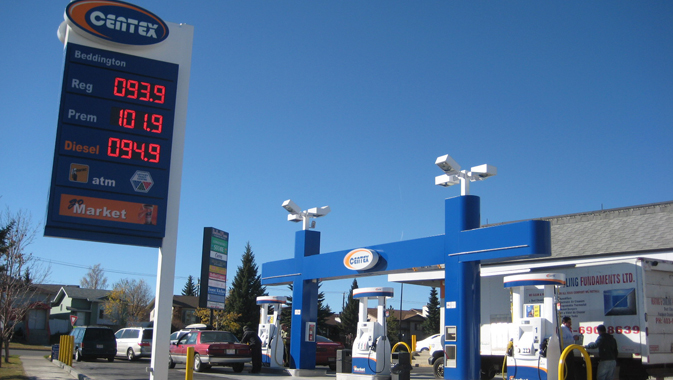 If you go back about twenty-five to thirty years ago, gas stations were a lot different. The model was based on full-service pumps, snack foods and a garage or auto body shop. Now these have evolved into grocery stores, restaurants and self-service…
~
It all started as the big players were consolidating their businesses amidst the prolonged recession of the early nineties. The definition of a gas station was redefined and a new era was born. This shift was embraced by the owners of Centex Petroleum. Business in Focus spoke with Alnoor Bhura about the Centex advantage, and why the company believes that it offers an alternative in a very competitive business.

The company was started by Alnoor, a trained engineer, as Centex in 1996. Prior to that, in 1990, he joined his father’s business running another gas station. He took a couple of years off from 1993 to 1994 and travelled, which gave him the opportunity to re-evaluate his life and decide what path he would take in life. He came back from his travels and joined the business of his father during the tough financial crisis of the early nineties.

“I approached my father and told him that either I take over to see what I can do or I go and find a job as an engineer,” explains Alnoor. “He was gracious enough to say, ‘You know what, just take the station and see what you can make of it.’ He stepped aside, and that’s how we started.”

The industry was somewhat prohibitive at the time and the market was changing. Gas stations were consolidating, resulting in quite a change in the number of outlets. Many were closing because the costs to run a site did not make sense based on the volume that any given site was pumping. Although the major players were shutting sites down, at the same time new sites were appearing that offered much more in the way of convenience store related services.
“The old style store locations with their repair shops and full service were all being closed at that time. On the wholesale, the ability to buy product as an independent was limited. There were not a lot of options available for small operators with only one or two gas stations which made for a very difficult environment at that time.”

With the shift from an automotive repair type of station to a convenience store style, the major brands began to invest a lot of money into sites. There were fewer of them but more money was poured into the remaining sites leading to larger locations that were well lit and included hot food with convenience store items. This presented Centex with an opportunity. Some locations were not interested in continuing the brand and those sites came up for sale.

“Some franchise dealer locations were owned by third parties that were running and branding their name. We were able to compete for some of those sites, whereas previously it would have been difficult. It did present opportunities, but it was not an overnight success.” Centex began to get a foothold on its own identity and niche through this process.

Alnoor gave up his career as an engineer to be an entrepreneur and looks at this as a liberating experience. The Bhura family was able to maintain commitment to values and grow the company on its own terms. “If we got greedy and preoccupied with the bottom line, it can change the culture of the office, the business and the people that work in it,” he says. “The culture of a company, whether it is in athletics or entertainment, etc., starts from the top and then goes down.”

He goes on to explain that there are sports teams that always do well and others that don’t. Typically it is not the athletes that are the main cause, but the management and ownership. It’s all about the culture that they instill. A certain dysfunction within the ownership and management will be reflected throughout the organization. “The opposite example would be the Kraft family in New England and how they put a product on the field that is so competitive.”

There are certain core values that Centex cherishes. A successfully run business affords the people who work in it and those who own the business a measure of freedom. Appreciating the employees who work for Centex is important and the company creates an environment that makes employees actually enjoy coming to work. One of the ways in which it accomplishes this is by giving the employees not only responsibilities, but also the authority to make decisions and allowing them to make mistakes.

“We all make mistakes and, if we do, we will simply correct them. There isn’t the same accountability process that a lot of organizations have where people are accountable to who is above them in the hierarchical scale. There is a certain flexibility towards mistakes. I think we are more forgiving because people go out on a limb sometimes and it really motivates them when allowed to do so.”

Another of the core values is being grateful for having the ability to work and not always looking at the glass as if it is half empty. “It’s about looking at what’s there, instead of what’s missing all the time.”

The company claims that it is “Fun to be around” and Alnoor says that this is true. “People are more fun to be around when they have a certain sense of perspective and do not make a big deal of things that are not a big deal. It’s about being in the moment and realizing that we are all human. Things will happen, whether we are dealing with our customers or employees. When things go wrong, we tend to have a lot of patience and do not overreact.”

Centex will not expand just for the sake of expanding. If an opportunity arises, then it is evaluated independently. It has to make sense from a numbers point of view before the company will consider expansion. “We don’t have a goal every year on how many sites we want to convert or how much we want to expand. If we do that, then we aren’t able to entertain each opportunity on its own merit.” In 2013, Centex opened up eleven locations in Alberta and British Columbia but it is not overextending itself financially or in terms of workload. The quality of the service would be sure to suffer if it did.

“I have seen a lot of companies grow in order to attract more value to their shares. That is when they get into trouble because they grow too fast. Long term viability is way more important. The culture of growth needs to be questioned and revisited.” Part of the questioning involves examining priorities and finding a work versus family balance. Alnoor and his brother have put in a lot of years of hard work and it both families want to enjoy the fruits of their labours while they are still young rather than at retirement age.

There is a technological change happening in the business involving card payment and information technology which is influencing the company’s short term goals. “Short term, I want our company to be where the majors are with all of these technologies. In the future, you are going to see a very significant shift of volume away from the majors to more independent branders such as Loblaws, Costco and Co-ops.” To keep up with the changes, Centex has to ensure that it maintains its volume and level of service.

Centex separates itself from the competition by being more hands-on, allowing it to be able to react more quickly as issues happen. It is also committed to finding a way to let its retailers and operators, who are in touch with its customers, have a greater sense of ownership in each location. At Centex sites, the retail manager is the owner of the store and has a lot invested there. This results in a better relationship between the customer and the person that they see every day behind the till.

Alnoor expresses that consumers need to support independent and local businesses to create healthy communities. “There are a lot of hard working entrepreneurs who are your neighbours and, by giving them a chance, it allows them to make our business environment more competitive.”