Building Success With Our Clients 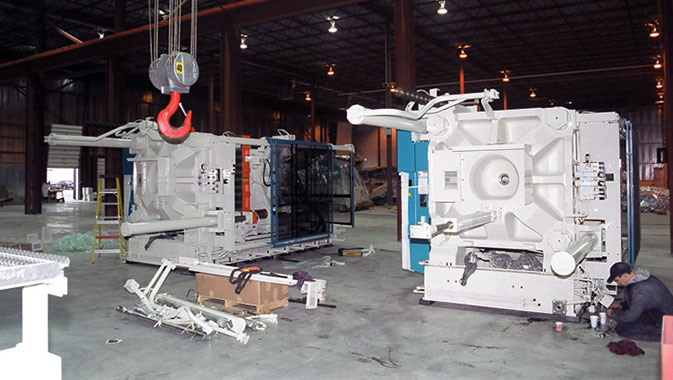 Matcom was founded in 1976 as a machinery moving company. Founder Matthew O’Dwyer was a rigger by trade, and his knowledge of this industry and the machinery in it enabled the company to increase its operations for fifteen years in Ontario.

Matthew would find a way to solve any customer problem and so services grew based on clients’ needs and requests. If any of those services could be turned into a viable business, it would become a separate department and grow from there. In April of 1976, the company began as Matcom Rigging.

It made sense to expand on the rigging experience and start to not only move the machinery but install it as well. However, it took a great deal of searching for key personnel with specialized skill sets such as millwrights and pipefitters to complement the core business of machinery moving. The team’s skills and requirements had them grow to become Matcom Industrial Installations Inc in 1983. This addition of complementary services is the main reason the company began state-of-the-art specialized machinery warehousing in 1992. In 2004 they moved into their 85,000 square foot head office facility that specializes in only Machinery warehousing.

“That was one of the big new product lines we were providing, because people wanted specialized machinery warehousing, and nobody in the area at that time had the capability or equipment to handle those kinds of loads.”

The Matcom Group of today is a multi-trade industrial service provider working primarily in the manufacturing sector. The company can do everything from bringing the machine to the client, offloading, placing, and piping the services to it, to precisely levelling and anchoring it, meeting safety and compliance requirements. Matcom can also add such options as custom maintenance catwalk at the top of the machine.

“A host of different skill sets are necessary for this work on many levels. Just with the millwrights, there are maintenance millwrights, industrial millwrights and hydraulic technicians.”

Some of the other specialized employees include structural welders, pipe welders, steamfitters, industrial plumbers, pipe insulators, pipe fitters and drivers with the necessary specialty class licences AZ and DZ to handle the large vehicles and transport the company’s own specialized equipment to get the job done.

Matcom’s business comes from all over the world. The major market portion is from Ontario, but, in the last nine months, jobs have come from Mexico, California, Alabama, Michigan and places as far away as Ireland and Australia.

“It’s dependant on where clients need us and where the equipment is going. When the dollar was higher, we were seeing a lot more of the European and Asian customers that were original equipment manufacturers who were selling their equipment to Canadian manufacturers.”

The head office in Vaughn has a rail spur that actually runs inside the warehouse through an oversized door. The rail spur is advantageous to original equipment manufacturing customers overseas which can put a machine or components into a crate, ship it and transport it by rail directly into Matcom’s facilities. The door is closed and the new machine is unloaded without being exposed to the elements.

“We also have a small fabrication shop for custom fabrication as a value-added service to the machinery installation. It also has a piping fabrication area for some of our larger piping jobs. We can do some prep work ahead of time in the shop.”

Emma explains that while there are other multi-trade service providers, none have the machinery moving capabilities that Matcom has. Industrial service companies actually hire Matcom to do their more challenging rigging work. For machinery moving, Matcom is the largest of its kind in Canada.

The company has a full-time, award-winning apprenticeship and training program. Having the highest skill sets are, of course, an enormous advantage in this industry.

“We work quite closely with Pre-Apprenticeship Training Institute, which has just started a branch in the Toronto area. They have branches all over the U.S. They take students that have finished high school, but do not really know where they want to go in the world and put them through an eight-month program to show them some of the many trades available.”

Matcom’s employees and apprentices have access to a variety of skills training. Having a large warehouse and facility that caters to so many different markets means that if one market is slow, Matcom can move people around or put them through more training. During this productive downtime, the welding supervisor will run shop classes on how to weld, or people can try their hand at a new certification or other forms of training.

“It’s a different philosophy than some of our competitors, who typically hire for a project and once it is done let people go until the next one. That is no way to live. We try our best to get everyone that forty-hour work week so you can put food on the table or plan for your mortgage.”
The biggest challenge by far has to do with finding the right skilled labour and being able to afford to pay skilled labour what they deserve. It is a highly-competitive and high-priced market.

“This is not a nine to five job. The issue that families have, when you first get into this industry, is that this is not like a factory, where you get home at a specific hour. There are hundreds of tonnes hanging in the air and it can’t just be left. It has to be dealt with before anyone goes home.”

The company is currently entering its fortieth year of solving client problems. There are plans for internal celebrations, to acknowledge the contributions of its people, and larger ones involving customers and partners, some of which have been with the company for forty years.

“We are really big on solutions. We are the people you come to whenever anybody else says you can’t do it. Gearing up to our fortieth year we are re-branding the group as one, because we used to be individual companies, and we are moving towards being more about industrial solutions.”