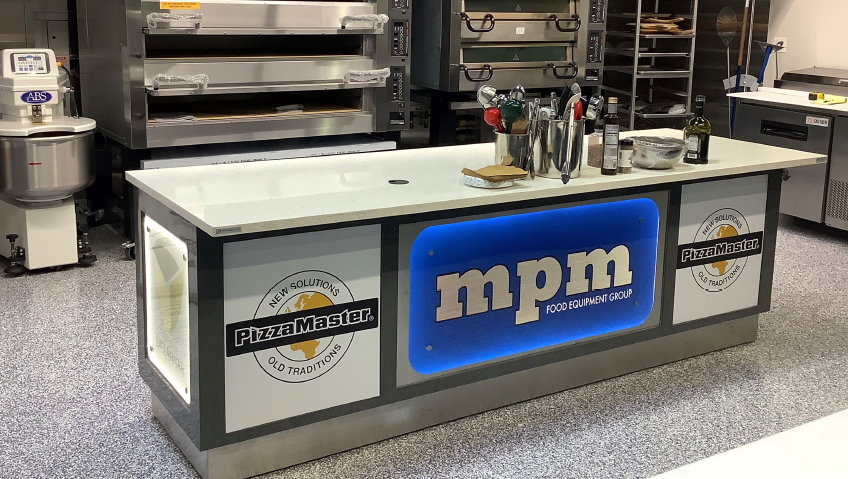 After working for two other well-known foodservice equipment companies and eventually getting laid off, Larry Nicholson started the MPM Food Equipment Group in his basement in July of 2003. “I’ve been in the supermarket part of the business my whole career, and so without a job and with three little kids in a north suburb of Chicago, I needed to get back to work. I incorporated MPM Food Equipment Group, and the name stands for Matthew, Patrick, and Mark, my three boys.” He chose the rest of the name to make clear that the business would represent multiple companies.

In 2011, MPM acquired a company called Connecticut Food and Weighing Equipment to further expand its market reach. The new branch manages all of the northeast states for MPM, and the partnership has turned out to be quite profitable for both parties.

“We had growth every year consistently, and we got to the point where we’re a $20 million business, and then about three years ago, we kind of peaked and started declining. Whole Foods was purchased by Amazon and they quit building new stores, which slowed down our growth,” says Nicholson, MPM’s founder and President. At its peak in 2018, MPM had a staff of twenty-four people but was forced to let a few go due to similar patterns with other supermarket chains affecting its growth.

As a result of the pandemic, the decline in sales for MPM did not last very long. “When everybody was staying home, they still went shopping, so supermarkets kept chugging along and replacing equipment, and we stayed alive there. But the big thing was the pizza business,” explains Nicholson.

The pizza section of the food retail market was incredibly active throughout the pandemic. Many restaurants had to shut down but were still permitted to offer carry-out and delivery services. This motivated some restaurant owners to add pizza to their menus, which led to a huge increase in demand for MPM. Its pizza oven sales in 2020 were approximately fifty percent higher than the previous year.

Although the pandemic resulted in significant growth for MPM, some difficulties have followed. Currently, the supply chain for manufacturers, in general, is a problem. The lead times for equipment have extended considerably because manufacturers are waiting for components. When most of the United States shut down and non-essential manufacturers closed their plants, it had a ripple effect throughout many markets. One product that has been less affected by supply chain interruptions is the PizzaMaster electric deck oven. MPM imports the PizzaMaster oven from Borås, Sweden, and its parts are sourced from within Europe.

For MPM, the PizzaMaster products are selling even faster in 2021. Currently, sales are forty-seven percent above last year’s numbers. The key factor is that these ovens are electric and there are over 50,000 gas deck ovens in the United States that need to be replaced. The heat capacity of the PizzaMaster is unique because it can reach 932 degrees Fahrenheit, or 500 degrees Celsius, and it has heating elements at the top of the chamber and below the hearthstones.

“With PizzaMaster, it’s the opposite. The more you feed it, the happier it is, and now we have testimonials everywhere about how we can increase their capacity during peak times, and it’s got exceptional recovery on heat, so this allows the customer to actually sell more pizzas in the same time frame,” says Nicholson. MPM offers the largest range of PizzaMaster models, with 85 sizes and over 1,500 combinations. Its capacity and flexibility are valuable for quality precision cooking.

“We can do all different types of pizza: Neapolitan from Italy where they need the 900 degrees to cook it high for the large percentage of hydration in the pizza dough, the deep dish, and the Detroit style. We can cook every different type of pizza, and we actually do it better. And our pricing is very competitive,” says Nicholson.

Customers can find food equipment products online at low prices, but these products are not accompanied by any service or support. The MPM sales team has a substantial amount of experience that is hard to compete with.

There is great team camaraderie between the sales and administration departments at MPM. Many of the employees have been with the company for most of its existence. “Each employee takes ownership in their responsibilities when completing their tasks,” says Nicholson, “And we’re very technologically-driven, so we use a lot of technology to minimize labor such as automating a quote into a purchase order through our accounting system, and we have a customized [customer relationship management] system that really helps the sales team.” The culture is friendly and open because everyone is free to be their own leader, and the self-motivation approach works well since the employees are so experienced and goal-driven.

This family-run business and its team of experienced people with integrity enjoy giving back to those in need. It regularly supports sharing parishes that deliver food in the Chicagoland area by donating equipment such as freezers and walk-in refrigerators to their food depositories.

One of Larry’s sons, Patrick, is twenty-seven years old and has Down syndrome. He is an employee of MPM and works two days a week on the pizza demonstrations and helping to close sales. Patrick’s journey has inspired the team to get involved with an association called Misericordia, a campus in Chicago with approximately five hundred adults who have different types of intellectual and developmental disabilities. MPM provides all of the association’s food equipment by selling to them at cost or by donation, depending on the product. “We’re very big into Misericordia because that’s where I hope Patrick might eventually be able to live as he tries to figure out what he wants to do one day,” says Nicholson.

Consolidation in the industry is making it more difficult for smaller dealers to be profitable. To survive amongst the competition, a small company needs to find a niche in the marketplace, and PizzaMaster is MPM’s niche.

“We’re also looking into private-labeling some bakery equipment for supermarkets and wholesale bakeries that we will probably call BakeMaster. We’re looking at doing something like that in 2022. That will give us a couple of product lines we’ll have exclusives on in the U.S., and that will give us that niche,” says Nicholson. MPM has a five-year goal to increase the gross profits year after year with PizzaMaster and its other commercial food equipment.

MPM Food Equipment Group is a one-stop shop for quality foodservice equipment and design services to meet any customer’s unique needs. Prepared for more growth, the company aims to be flexible and adapt to the market, despite the challenges that may lie ahead.