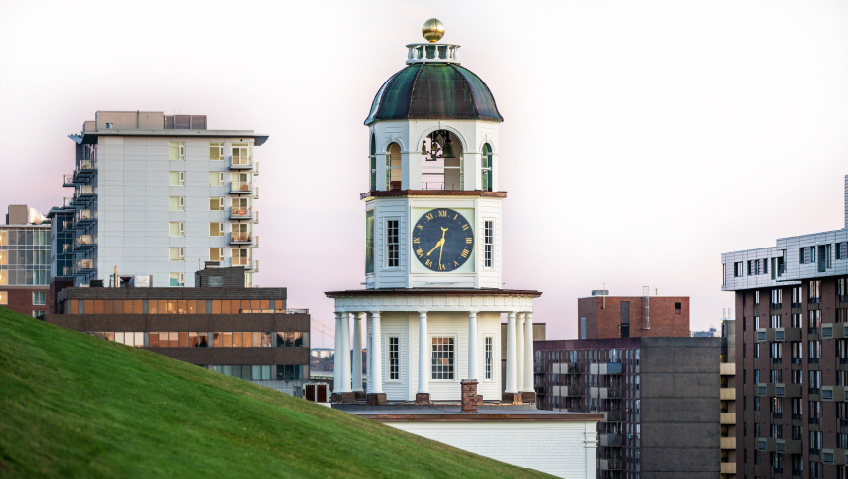 For almost 20 years, Seagate Construction Inc. has provided customers in Canada’s Atlantic provinces with a rare level of service on projects from spas to restaurant renovations, and breweries to historic clock restorations.

Seagate was founded in 2004 by Robert Scammell. Co-owners today are John Fredericks, with Seagate since 2004, and Steve Harris, joining in 2011, who between them took over the privately held company in 2018.

Since then, the company has grown steadily, with the co-owners overseeing estimates and project management. As a general contractor, Seagate’s staff of 13 – including project managers, site superintendents, safety officer, administration and accounting – handles all aspects of every construction or restoration, ensuring works create minimal interruption and are completed to meet client schedules.

“Robert [Scammell] was set to retire, and both John and I were long-term employees, so it was a logical transition,” says Harris.

“Everybody who worked with the company the day the ownership changed is still here. Since then, we’ve added to that staff. But we were left with a great, very qualified team of people, and they stayed with us. We’ve added to that staff with similar-type people who we feel are compatible, experienced, and are helping us grow.”

Building on the foundation they’d been given working with the previous owner, Harris and Fredericks continue to uphold the values they learned from close communication with clients, discussing projects, and building mutual confidence as they set scheduling and time frame targets.

They came to believe in the power of cooperation and collaboration; of addressing potential issues before they became problems through pre-construction consultation, meticulous design-build processes, and superior construction management.

“It was a very good, planned approach to the industry by the previous owner. We wanted to continue with that, and we feel we are. We’ve built a strong reputation in the industry, stepped up the volume a little bit, built some larger-scale projects, and are continuing to grow each year.”

Some general contractors do their job, and nothing more. The opposite is true at Seagate Construction, where Harris and Fredericks work non-stop at their relationships with clients, which sees them taking on work with the same customers repeatedly.

“The majority of our clients are repeat clients, people we’ve worked for in the past, and they are comfortable with us,” says Harris. “We have a strong reputation in the industry of being fair to deal with and producing quality work.”

The Murphy Hospitality Group, Value Village stores, Loblaw Company Limited, and many others have praised Seagate’s professionalism and respect for budgets, their work under tight deadlines, and their ability to handle the unexpected.

Prince Edward Island-headquartered Murphy Hospitality Group has retained Seagate for several projects, including the Gahan restaurant, Pickford & Black, and the Barrington Steakhouse & Oyster Bar. “Based on their experiences with us during those projects, they asked us to help them with the Nordic spa in PEI,” says Harris.

A work in progress, the Mysa Nordic Spa & Resort (https://mysanordicspa.com/about-us/) will become PEI’s first Nordic spa and resort. Built on 18 acres on St. Peters Bay, the project is slated for completion by early summer.

Renovating an existing resort with a lodge and some cabins, Seagate Construction is involved in many areas, including a new hot pool, cold pool, relaxation building, spa building, and more.

Clients seeking companies to handle commercial, hospitality, retail, industrial, institutional, and historic renovation works come to Seagate Construction for many reasons, including accountability. Taking on jobs valued from $10,000 to $10 million, Seagate prides itself on being responsible, professional, and able to face the challenge of working in and around occupied spaces.

“You have to be pretty cautious of everybody else in the area, tenants and whoever we are working around,” comments Harris. “Our goal with that is to minimize issues for our clients. If we’re not paying attention to the needs of people in an occupied space, it can cause a lot of problems for the client, and that rolls downhill.”

Known for its methodical planning, project coordination, and communication, “Seagate Construction approaches every project as an opportunity to create long-term relationships,” according to the company. From the first meeting, to discuss project outcomes, to scheduling and completion, Seagate works with clients every step of the way.

A classified federal heritage building owing to its historic significance and associations, the Citadel Hill Town Clock is one of the most recognizable structures in Halifax, Nova Scotia. As an example of Palladian architecture, Parks Canada has described it as “characterized by a symmetrical and balanced composition, monumental scale and elegant proportions.”

An important part of Canadian history, the famous clock has been fixed-up over the years but hasn’t had a total renovation since the 1960s.

Seagate took on the renovation of the structure, including painting the entire exterior, attention to some copper roofing, and adding gold leaf to the ball on top of the clock.

For the clock restoration, the company retained the services of a local horologist to disassemble the clock and ship the parts away for re-plating and refinishing with 24-karat gold leaf on the hands and numerals. Completed in 2019, this important work took about a year from start to finish.

Aware that Seagate is only as strong as its people, the company works with its own tight list of qualified subcontractors when it bids on projects. “We typically do 40 to 50 projects a year,” says Harris. “Some are smaller jobs. In 2021 we did 43, and in 2020 we did about 30.”

During the COVID-19 pandemic, the construction industry was deemed essential. Although the pandemic created challenges, it also saw the company at its busiest in years. “I think once everybody realized the safest way to do things, we all moved forward as an industry, and I don’t feel that it slowed our industry in Nova Scotia.”

Growing at a controlled rate that’s acceptable to management, Seagate is bringing new staff to the business in the right numbers to ensure that the company can keep its performance steadily moving ahead.

“We’ve had a little growth bit by bit each year and we want to continue that,” says Harris, “but again, we want to do it smartly. It’s easy with the way the markets are right now. Volume-wise you can grow as much as you want because there’s ample opportunity. But if you get it, and you become too busy, then you don’t do that work as well as you should, which also has financial implications.

As we grow, we keep adding, but not taking huge jumps at a time – we’re trying to be strategic about it all.”