An Old Company with New Ideas 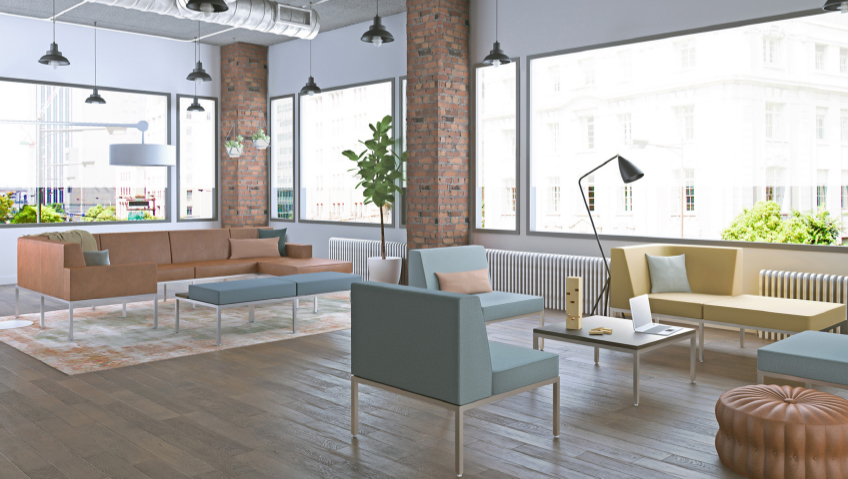 IOA Healthcare Furniture has roots that go back to the mid-1920s when Gigi Delmestri launched a furniture business in northern Italy. “He inherited a company that was making horse-drawn steel ploughs for agricultural use, and when the tractor finally came around to Italy, he had a workforce of about seventy people, and he didn’t want to have to shut down,” says Gigi’s great-grandson and IOA’s Executive Vice President Matthew Delmestri. To save the jobs on which his rural village depended, Gigi reinvented his company as a steel furniture manufacturer.

In the mid-1950s, Gigi’s son Dario took over and applied his knowledge of design to take the business in a new direction inspired by mid-century modernism. “It was very successful,” Delmestri says. “It was the right time for that type of furniture. Modern furniture in the sixties and seventies, especially from Europe, was very popular, and he was exporting ninety percent of his business.”

But the company struggled with labor relations and regulations despite this success because its location “was not really a business-friendly climate.” In response, the family moved from Italy to North Carolina, where IOA Healthcare Furniture is based today.

Dario’s son Fabio earned an industrial design degree from Pratt Institute in New York, which he used to steer the company in a new direction. “During that time—the late eighties—there was a bit of a downturn in the economy, and so he started looking for industries or niches that may not be as affected by the markets,” Delmestri says. “He found healthcare furniture, and we started with a simple healthcare collection: a rocker, a recliner, and some lounge furniture.”

“It quickly grew to the point where, today, ninety-eight percent of all of the business that IOA does is healthcare furniture. We continue to grow through the years. We have about two hundred full-time employees and sales of about $60 million, and we’re the largest privately-owned company in our industry.”

So what is the secret to four generations of success? Just as Dario did with his son Fabio, “My dad gives me a long leash and allows me to experiment and fail and learn on my own, and I think that’s a big part of our success,” Delmestri says. “We trust in one another, and we allow each generation to learn on their own, and frankly, if you look at each different generation and what they did, they’ve each taken the company in their own direction. I think that’s been a big part of the success. My grandfather was maybe more design-oriented than his father, and my father was more mechanically inclined than his father. So each generation gets to play to their strengths.”

While four generations of Delmestris have run this company, “we owe a lot of our success to the tremendous talent of our employees,” he says. “IOA would not be what it is today without them. Adam Gregory, Creative Director, has been a transformative force who has elevated IOA’s designs. He has brought to life many of the designs done in collaboration with our partners such as HKS and CAMA, Inc., amongst others. If there is one thing I am most proud of, it would be bringing people like Adam on and making sure they have the infrastructure around them to succeed.”

This rich talent pool has helped IOA become a creative leader. “We are known as being an innovator in the industry,” Delmestri says. “We’ve had a lot of firsts, and we’re actually one of the few in our industry that manufactures under FDA compliance, [which has] allowed us to continue to push the envelope and create recliners like our exam recliner.” This unique chair rises to the same height as an exam table, has arms that fold down, and can be customized to include stirrups and a paper roll.

“That’s become one of our biggest sellers and makes up about twenty percent of our business,” Delmestri says. “It’s a good example of the way that we innovate, and we do so because we are constantly customizing our products for our clients. And while that’s not always the cheapest way of doing things, it really pays off because many of those custom [designs] then go on to be best sellers later on.”

The company’s metalwork heritage is another differentiator. “Our experience in metal manufacturing sets us apart from our competitors,” Delmestri says. “That allows us to create many of our own mechanisms. We design them and manufacture them… We have twenty-seven different mechanisms to choose from.”

IOA has four exciting new collections that will launch in October at this year’s Healthcare Design Conference in San Antonio, Texas. Internationally renowned Cannon Design has partnered with IOA to create a behavioral health collection ideal for waiting rooms and lounge areas. The focus on this area of healthcare makes a lot of sense. “Behavioral health is the fastest growing segment, especially when it comes to construction,” Delmestri says. “There are more behavior health facilities being built than any other types.”

In another cooperative effort, IOA worked with well-known design firm HKS to create a waiting room collection that draws on the principles of multiple sectors. The head of each HKS department—from transportation and higher education to corporate and hospitality—“brought in their own department-specific needs,” Delmestri says. “We tried to design something that would work in all of those environments.”

While the vast majority of IOA’s furniture goes into the healthcare sector, the company has experienced an increase seen in other sectors, “especially as our design has evolved and become more sophisticated.” In addition, IOA’s collections have gained popularity since COVID hit because the cleaning process in all public spaces has become “more rigorous and the chemicals harsher, as they should be,” Delmestri says. “Our products are designed to withstand that.”

Another new IOA product is an addition to the company’s Cama collection, designed in collaboration with Rosalyn Cama, President of the boutique design firm CAMA. “She is really very well known in the industry,” Delmestri says. Lastly, IOA is launching a sleeper sofa collection that was designed completely in-house. The team is capitalizing on its bestselling area of expertise with this product line. “Seventy percent of our business comes from patient room furniture: recliners and sleepers,” Delmestri says.

IOA has a handful of new initiatives in addition to these new, upcoming collections. Launching in October, IOA for Life is a push to include a QR label in all the company’s furniture, giving customers a full suite of product information at their fingertips. “When you scan the QR label, up pops all the information about that order—an exploded view of the chair where you can see all the different parts,” Delmestri explains. “Often times they don’t know who built the chair [because] we sell through a third party—office furniture dealers. They don’t know who the dealer is. They don’t know what the part number is. Sometimes they have a hard time describing it. So now when they scan the QR label, up pops all that information, and then they can make an informed call and say, ‘We need a new arm cap that is part number 4,021 and the color is 31 gray.’ It takes out the guesswork.”

Another innovation is IOA’s new fall prevention technology. In partnership with the University of Michigan, the company has developed a recliner with a footrest that can withstand up to three hundred pounds. The special footrest will now be available on 90 percent of the company’s recliners to improve safety. “The number two cause of daytime patient falls is getting in and out of a recliner,” says Delmestri.

“They could be weak and they can’t operate the lever or they might just not know how that chair operates and so they try to slide out of the chair without putting the footrest down. With any other recliner that would mean that the chair would either tip forward or that the footrest would collapse back into itself.” But now, patients can put their full weight on the very end of that footrest. “That’s been a huge game changer.”

In another recent initiative, IOA teamed up with North Carolina State University to develop a next-generation fabric able to withstand harsh disinfectants. “We have these chairs that the inside lasts forever, but the fabrics [were] failing because of cleaners just eating them up,” Delmestri says. University researchers came up with a material that is abrasion and puncture-proof in addition to withstanding strong chemicals. “It’s something that holds up really well to the eight different families of hospital cleaners that are being used today,” Delmestri says.

With so many new collections and initiatives underway and a century of experience to build upon, the team certainly has reason to feel optimistic. “We’ve continued to see 30, 40, 50 percent growth year after year,” Delmestri says. “I’m going on my tenth year with the company but I plan on being like my grandfather who’s eighty-eight and still comes into the office every day. I feel really confident about the future of the company.”