Over 30 Years of Excellence 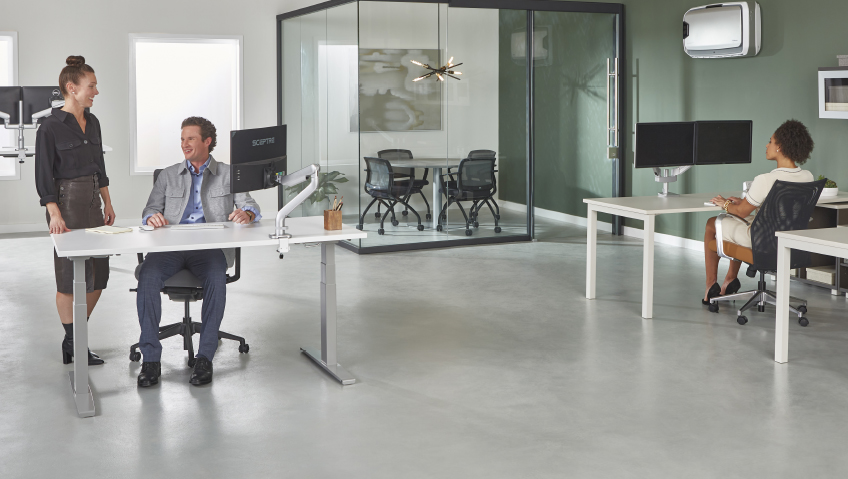 As businesses across the globe struggle to adapt to the hybrid post-COVID work environment, one company has emerged as a leader in office furniture and equipment, surpassing the quality found at the retail level. From its base in the sun-baked desert of Mesa, Arizona, ESI provides ergonomic equipment and furniture to suit the fast pace of modern office environments. It is reaching new horizons with a planned expansion in Chicago.

ESI’s started with humble origins, when it operated “out of a garage,” in the words of Executive Vice President for Customer Experience Robert Day. “It’s grown tremendously since that beginning,” he says. Growth reached a fever pitch with its 2017 purchase by international business machine giant Fellowes.

General Manager for Contract Interiors Todd Holderness notes that ESI’s growth has remained steady thanks to its rock-solid customer focus, seeing itself as filling a necessary—if often overlooked—office role by providing strong yet simple solutions for both its vendors and end customers.

“We’re easy to do business with. We deliver. We do what we say we’re going to do. We ship fast. We create a lot of profit for dealers,” Holderness remarks. “We’re a very profitable line for a dealer.”

This profitability also comes from ESI’s varied lines of ergonomic products, from keyboard trays—the company’s original bread-and-butter—to power solutions, lighting, height-adjustable desks, arms capable of supporting up to six monitors, and more. The wide range of quality products, Day says, is the result of ESI’s collaboration with ESI’s parent company Fellowes and other manufacturers to build a strong team.

“The team… is a highly sophisticated product development team, and that’s part of the evolution that we’ve experienced,” he says.

But a company is only as strong as its workforce, and where ESI truly shines is its intensely customer-focused strategy, which Day only half-jokingly refers to as an “obsession.” The philosophy is all-encompassing from the ground up. “The customer-obsessive model really starts internally,” Day explains. “We have a three-customer model: each other, our reps, and our dealers.”

If ESI’s staff see each other as customers, he reasons, that mindset will eventually extend outside the company. “If it starts at the top and internally, it’s very easy for the dealer to feel it ultimately.” He says that parent company Fellowes also boasts a strongly customer-focused service model, which made ESI’s integration a largely seamless transition. “We were already on the same page, so we didn’t have to start over there.”

Externally, ESI’s customer focus influences every aspect of its operations, with a focus on making transactions as simple as possible through the company’s alliterative maxim of ‘fast, flexible, and friendly.’ Holderness observes that, unlike vendors that favor acquisitions, ESI has instead expanded to meet multiple sectors. This, he explains, has resulted in ESI’s popularity among its regular clients. “We’ve really carved out our niche as the primary solution for that contract-aligned dealer, because of our capabilities.”

A large inventory stockpile capable of filling virtually any order within forty-eight hours, even in today’s supply chain snags, complements this model. According to Holderness, this inventory has contributed to ESI’s continual growth in the face of economic slowdowns. “We’re up significantly, even over last year, from a growth standpoint,” he says, attributing part of the company’s success to having inventory when its competitors have not.

Additionally, ESI is fortunate that, due to its category focus, its products are normally needed towards the end of construction projects, which gives vendors a sense of security. “They can call us up with comfort and know that we’re going to ship something in two days, and it’s going to be there within a week,” Holderness says. “It’s that peace-of-mind solution that we can provide by having all that inventory on hand.”

Naturally, this model may be upset by the onset of hybrid offices, which are rapidly becoming normalized in a COVID-conscious world. Yet, Day says, inventory is shipping faster than ESI’s ability to ship it. Despite the growing popularity of hybrid environments, he and his colleagues see little impact on ESI’s business strategy. “From what we’re seeing, I don’t see the model has changed that much, other than the hybrid,” he says. “I don’t think the office is going away.”

Indeed, since its founding, ESI has deliberately chosen not to embrace the home office market but stick strictly to the office market via contract dealers. Now, despite more offices becoming open-plan to accommodate social distancing rules, the company’s growth is stronger than ever. “It’s reflected in our numbers. We’re up double digits year to date,” says Holderness.

However, the team remains vigilant. Manager of Project Management Ben Hoffman is a key player in ESI’s product development team and says that the company is incorporating the ongoing change into its strategy. “The way that we look at our products, the way that we look at solutions for our customers and end users is definitely affected by what’s happening, and I think it will continue to happen going forward,” he says.

Hoffman and his team continually incorporate client feedback through a tried and tested human-centric approach; far too often ‘ergonomic’ furniture has turned out to be anything but. To avoid falling into this, ESI solicits ongoing feedback from all its potential users—beginning with its staff and moving externally to vendors and clients. “We’re making sure that we’re hitting on all the different touchpoints because everyone has a different viewpoint on how that affects the product,” Hoffman says.

This feedback has resulted in a series of awards, most recently a coveted Red Dot Design Award in 2022 for its Sena series of monitor arms. “We’re highly honored that we were considered for that,” Hoffman states with pride. He and his team view the Sena arms as the ultimate ‘splice’ design, integrating functionality with the latest in ergonomic research.

ESI has managed to cram an amazing amount of features into the arm. Finger-touch adjustability allows incredible ease of use, allowing users to easily transition from sitting to standing. Dual arm with sliders maximize space, and the entire assembly uses a smaller footprint to provide a much larger range of adjustability. “We were trying to integrate functionality with ergonomic excellence,” Hoffman says.

This common design approach is typical of ESI’s products, he explains, and the company’s latest generation of monitor arms follow the same balanced principle. Continuous incorporation of top-to-bottom, internal and external feedback provides the best experience and end product.

“We find that it is a process. It’s very difficult and sometimes time-consuming to go through this process on the front end,” he says, “but we do find that it pays off dividends as we launch these products and we receive the feedback, which is typically been very positive.”

The Sena product family, as well as many other ESI offerings, will soon be available at the company’s planned Design & Experience Center in Chicago’s upscale Fulton Market. Upon its completion in mid-2023, the new showroom will provide a much larger display space than its current showroom.

Day says that the new showroom will allow ESI, as well as its Fellowes sister companies such as Treadway, to increase branding and integration. “It’ll definitely be a big splash for us at Fulton Market in 2023.”

Despite new products, ESI’s attitude towards its dealers and customers is unchanged after over thirty years. More than anything else, it is about the relationships and wanting all parties involved—employees, dealers and customers—to have the best experience possible Day remarks. This, he is sure, will keep ESI moving forward. “It’s a really good value proposition for our customers, for today and in the future. It’s not going away.”