The Science of Productivity 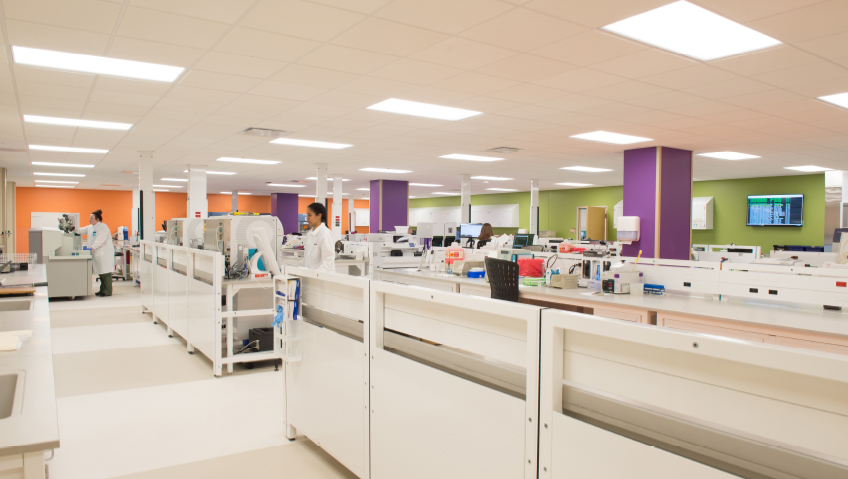 Since 1982, Symbiote, a family-owned company founded by Travis Randolph, has been designing flexible, mobile, modular laboratory solutions for the education, technology, security, biotechnology, and health markets.

To learn about Symbiote, its 40-year history, and the new direction it’s taking, we met with the founder’s son, Barrett Randolph, who three years ago took over the reins as President; Amber Wendling, National Sales Director; and Nick Suttorp, Creative Services Manager, at company headquarters in Zeeland near Lake Michigan.

Randolph explains that while a student at the University of Michigan, his father had “crossed paths with Robert Propst, the main researcher for Herman Miller, the leading work-space furniture designer in the U.S.” Working together at Ann Arbor Hospital, Propst and Randolph’s father developed the first health care furniture line for Herman Miller, “which was how he got into the furniture world, and health care specifically.”

From there, his father “helped develop a product for Herman Miller called Action Office, with a portion of it to be used in a factory setting, but then that company decided it was not a worthwhile product to continue, and so at that point, in 1982, he left and created his own business, which he named Symbiote.”

Connecting people to their work
The name Symbiote is particularly well-suited, as it references the classical Greek word, “symbiosis”, meaning “a living together”, and the modern scientific term, defined as “an interaction between two organisms living in close physical association, usually to the advantage of both” by the Concise Oxford Dictionary.

But as Randolph says, his father extended the definition “to include the connection between the work itself and the people doing it. Symbiote’s laboratory furniture was developed with the idea that the work environment should enhance the work being performed, so furniture and tools need to be designed to support the purpose of the work and allow workers to make optimal use of their time and skills.”

The logical corollary to this is that if it is easier or more comfortable to use furniture designed specifically for laboratory use, such as the microscope table Symbiote designs that tilts to the correct angle so scientists or technicians don’t have to work hunched, the result will be better. And by extension, we’ll all benefit from better science and improved technology.

Symbiote’s heavy-duty, height-adjustable table is an excellent case in point.

“It evolved years ago out of a request from Boeing,” Randolph says. “Boeing had a whole group doing the wire harnessing assembly and they wanted to lay it out the length of the entire plane. But some workers were tall, and some short, so they needed a table that could adjust to the height of the workers. We created a worktable that could be raised and lowered for an entire group or could be raised individually in sections.”

Bringing it in-house
For its first 39 years, Symbiote was an engineering and design company that used third-party manufacturers to fabricate the products according to their specifications. When Barrett Randolph became President three years ago, he says, “I thought we needed to do a better job of making our own products and stop acting as a middleman in our own business. So we’ve added a lot of manufacturing equipment to support that.”

To create a state-of-the-art manufacturing space, over $600,000 was invested to reorganize and expand the original space by 4,670 square feet to accommodate the equipment—laser cutters for steel tubing and sheet steel; a bending press, welding equipment and routers. This led to seven new manufacturing jobs.

All of Symbiote’s furniture is designed and manufactured to meet the exacting standards of the Business and Institutional Furniture Manufacturers Association. The company, certified as carbon neutral, follows a lean manufacturing model and maintains only a small inventory of some high-demand items.

Symbiote does do custom work but also maintains a line of standard products, many on casters for ease of movement, with finishes that meet the needs of laboratories. For example, anti-microbial stainless steel is used for labs where sterile conditions are imperative, while an epoxy resin finish meets the bill in laboratories using burners or gas due to its strong heat-resistant properties.

Using standard pieces along with customized pieces, Suttorp will look at the customer’s space, considering their needs and wants, and lay it out, creating three-dimensional spaces with drawings, elevations and renderings.

“Much of the planning is done virtually,” he says, “because often it begins before a facility is even built. We have meetings with the end users, dealers, and architects, and work through the specifications and requirements, using the products that fit best to achieve what the end users want,” he explains.

“Within our five primary markets there could be hundreds of types of labs with different needs—some high-tech labs need a lot of power and data, while others need exhaust systems because they’re working with liquids and gasses. Biotech is a huge catch-all for many different purposes and could include anything from pharmaceuticals to DNA sequencing, with vastly different needs.”

Customization is just one reason why laboratories are more than happy to partner with Symbiote. “It’s also our heavy-duty capability,” says Randolph. “We use 14-gauge steel tubing with 1,000 lb. capacity on both sides of the workstations. Our heavy-duty, height-adjustable tables are rated at 750 lbs., but I have put 2000 lbs. on them. If a customer is looking for an ergonomic solution for their employees to work on big pieces of equipment, they can put it on one of our tables and employees of different heights can set it at the right height for them and have an ergonomic solution,” he says.

“Another reason is that everything we offer can be put on casters, so if a lab has to re-design a space for a special project or if needs change over time, the configuration can be easily accommodated, without having to call in a facility team to move the workstations.”

And whether the designers and fabricators at Symbiote are working on a three-story lab with multiple uses as they did in Montreal or a high school science wing expansion that is training scientists for the future, the team at Symbiote takes the same level of care, creating ergonomic solutions so professionals and students alike can do their best work.

Symbiote solutions
Proprietary and confidentiality concerns surrounding research and product development mean that some companies do not wish to have their inner workings made public, but the team at Symbiote was able to share several case studies of organizations that did agree, to give readers a better understanding of just what a crucial role the right equipment can play.

When Amway, a billion-dollar U.S. company, renovated its research and development labs that produce supplements under the Nutrilite brand in Ada, MI, it used Symbiote’s electric and manual height-adjustable mobile workstations and fume hoods.

The overall design, based on the concept of a bicycle wheel with an outer rim, spokes and a central hub, meant that the multitude of different tests performed on raw, organically grown ingredients could be carried out efficiently to reduce the time required to test both them and the finished products. The renovation was completed in 2014 and eight years later, the space continues to function optimally.

The Phoenix Children’s Hospital employs 100 scientists and technicians who work around the clock, carrying out critical testing in the areas of microbiology, hematology, tissue processing and anatomical pathology. Before 2017 and reconstruction, critical testing was carried out in 10 different labs with workspaces not efficiently configured.

Symbiote was able to bring the ten labs together in one core clinical space and meet the defined needs of the hospital for ease of cleaning, infection control, and increased power and data at each station.

To meet a request for a cheerful aesthetic, standard all-white cabinetry was customized with splashes of color. Because of the efficiency of the new layout and furnishings, testing time was cut by hours, meaning that critical treatment, dependent on accurate testing and diagnosis, could begin that much sooner.

More labs, more solutions
The list goes on and on of laboratories which have benefited from Symbiote’s solutions. They range from Facebook’s Hardware Lab, in Menlo Park, CA, to Collins Aerospace location in Cedar Rapids, IA, where 100 workstations focus on avionics and missions systems research. There’s Vanderbilt University Student Surgery Lab in Nashville, TN, and the Central Hospital University of Montreal (CHUM) in Quebec, where diagnostic, research, and teaching labs span three floors of one of the largest hospitals in North America.

Wendling, who joined Symbiote recently, having worked for Herman Miller, is excited about the opportunities for the betterment of society that Symbiote’s designs and products afford, particularly in the medical field.

“Speaking as a mother, the improvement of testing services at the Phoenix Children’s Hospital warms my heart,” she says as she reflects on the power of the right work environment to effect positive outcomes. It’s for reasons like this that she’s excited to meet with dealers and sales reps and supply them with information about specialized laboratory furniture and how it differs from commercial office furniture. A lot of dealers just won’t touch a lab space because they don’t feel comfortable in that area, she says, but Symbiote’s products make it easy for them.

Getting Symbiote’s name out there, and the hard work and dedication of the team, whom Wendling calls “a fantastic group of people”, will continue their beneficial impacts on the output of labs across the country.