Precision and Quality for More than 30 Years 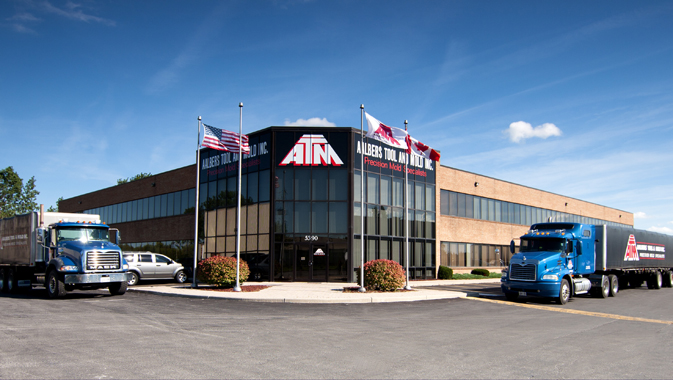 Oldcastle, Ontario based Aalbers Tool & Mold began in the back of a rented space with three people and a focus on quality. The always profitable company has seen slow and steady growth since its inception. Business in Focus spoke with President Toni Hansen to learn more.
~
Thirty-three years ago, Toni and Gary Aalbers, the present owner of Aalbers Tool & Mold, were working together at a company that went out of business. Gary Aalbers then started his own firm and brought Toni and another former co-worker in about eight months later. From that team of three, the company has since grown to over two hundred individuals.

One of the things that really separate Aalbers Tool & Mold from its competitors is its component division. The company has made its own library of standard components for moulds. These are made on a CNC machine (a computer numerical controlled cutting machine) that runs off ten to twenty at a time and kept in stock.

“It is taken out of the library as a component, and dropped in,” explains Mr. Hansen. “They don’t have to design it. We don’t have to worry about machining anything different. It’s all designed the same and manufactured the same.” In a customer emergency, the company can make and courier replacement parts with swift delivery and more competitive pricing.

A lot of careful consideration is taken in determining what should be manufactured and if it will be used on a regular basis. In other words, should it be a library staple? The library helps to stop the process of constantly having to remake different components.

Aalbers has always been profitable, which is something of a rarity. The care taken in selecting components for the library extends to other aspects of the business. The company is always looking forward and trying to see what changes are occurring in the market or the economy.

“We make very conscious decisions by looking at what the upcoming year will look like and what we will need. We won’t just replace a machine because it is ten years old, if it is running well. We look at it consciously and determine as to what the right piece of equipment is to either change or add. We pay a lot of attention to what we buy, when we buy and how we buy it.”

This kind of forward thinking helps with the bottom line. Many companies may jump at the latest state of the art equipment or technology, simply because it is the newest thing on the market, but is this new contraption actually needed in the manufacturing facility? And, will it make more money? Newer machines may be faster, but as Mr. Hansen explains, the main concern should be whether it is the right machine for the application.

“They are putting a little too much faith in something and they are not even sure what it does yet. For example, when high-speed machining first came out everyone was getting rid of their old machines. They said that you could make moulds so fast, it would make your head spin! I have been a machinist for years and know what the larger older and heavy duty machines can do.”

He compared the old machines to an engine that may not be fuel efficient and it’s heavier than most engines, but will last forever, and is built to withstand the wear and tear associated with driving.

“We know that the older machines are slower, but they will cut and rough material all day, every day, day in, day out, 365 days per year. And you will never have to replace a spindle or bearing.” Aalbers Tool & Mold does have new machines that rough; it simply picks the right machines and equipment for whatever process is being performed.

Aalbers is known for being able to lower the costs of labour by maximizing automation. It makes the machines work, rather than the employees. Twenty years ago, a job would be machined on a CNC machine or a duplicator. It would then be put into a die spotting press which you would spot for days – usually more than a week. Today that process has changed.

“You would go into the spotting press and check it to ensure that the verticals are up to standard. A little touch up may be needed. It may take a shift. Our processed machining has reduced that labour. It has also reduced the hours of assembly and fitting, which comes back to our components.”

The components made to fall within specified tolerances and manufactured to fit rather than being fitted manually. This takes the labour out of the process, reducing consumer costs for components.

“Instead of my guys working sixty hours per week trying to get a job done once it comes off the machining department, they are working forty hours per week.” The machines continue to run by themselves through tool changes and between shifts. Constant quality control is taken very seriously at Aalbers Tool & Mold and every component is checked.

Currently, Aalbers Tool & Mold has set up a new plant in Queretaro, Mexico. “We are fully operational. We service tools we build for customers in Mexico, as well as perform engineering changes.”

The company is very much planning for the future. Aalbers recently ordered a new high speed five access CNC machine worth about $1 million which ought to operational by June of this year. Two other machine acquisitions are also in the works. It has invested in its logistics department by purchasing another new truck and trailer – another $100,000 investment.