Supplying Tugs and Barges for the Pacific and Beyond 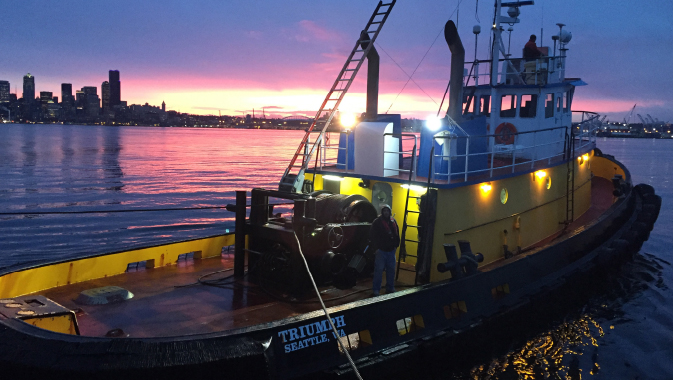 Founded in 1948, the Western Towboat Company is a family-owned business that runs tugs and barges from Puget Sound to the Hawaiian Islands, Arctic Alaska, the Aleutian Islands, the Panama Canal and South America.
~
“We have twenty-three tugboats and seven barges. Our main gig is anything to do with tugboats and barges,” says Russell Shrewsbury, vice-president of the Western Towboat Company, based in Seattle, Washington.

Shrewsbury says this over the phone this while operating an eighty-foot tug that’s taking a barge upriver to a Seattle terminal. In addition to being vice-president, Shrewsbury is also a tugboat captain, just like his brother and father. “I’ve been running boats for about ten years now,” he states.

The tugs tow unmanned barges and maneuver ships and other vessels into place. A typical job might see Western tugs moving barges loaded with machinery or other equipment or construction aggregate from island building projects. Western also routinely delivers freight of all kinds to residents of underpopulated southeast Alaska.

Shrewsbury notes that revenues are definitely on the rise. Western really began to grow as a company about two decades ago.

Western does its Alaska work under the auspices of Lynden Transport, a logistics company based in Anchorage, Alaska and Seattle. “As Lynden grows, we’re right there beside them to grow with them. Whatever their needs are, we try to provide,” says Shrewsbury.

While Alaska remains a big focus, Western covers a huge service area. “In the last decade, we’ve branched out to do longer tows. We’ve been to Cuba, Florida; we went down to Chile, and we’ve been up into the Canadian Arctic. We’ve been to Midway Island, Johnston Atoll, Wake Island,” says Shrewsbury. Many of these far-flung assignments are at the behest of Lynden.

For all the vast ocean space the company plies, Western does not envision setting up branches in other Pacific ports in British Columbia or South America. “We’ve been pretty much able to get everything done from Seattle,” says Shrewsbury.

Since the 1980s, Western has been building its own tugs and has fabricated eighteen so far. Vessels range from the relatively small thirty-eight-foot, single-screw Flyer tugs to 120-foot ocean-going Titan Class tugs. All new tugs are Internet and GPS equipped.

The main engines of every tug Western operates, with the exception of one boat, come from Caterpillar. It relies on Seattle-based Harris Electric, experts in maritime electrical systems, for tug-based electrical work including radar and engine-room distribution panels.

While Western built a boat for Lynden a few years back, the company generally makes tugs for its own use. There are no plans to start building boats for other firms.

It doesn’t have space in its shipyard to make barges, so most of the barges it uses are constructed by Gunderson Marine. Gunderson is a division of the Greenbrier Companies – a major supplier of transportation equipment – based in Lake Oswego, Oregon.

The Western Towboat Company was founded by Russell’s grandfather, Robert Shrewsbury Sr. It was a low-key business, at first. “He had one tug in Seattle and was pulling logs. By the time my dad and my uncle took over, I think we owned about maybe five or six tugs,” says Shrewsbury.

Robert Shrewsbury Sr. transferred ownership of the company to his two sons, Bob Jr. (Russell’s father) and Ric (Russell’s uncle), in the late 1980s. Last year, Ric Shrewsbury, who had been serving as vice-president, decided to retire and sold his share of the business to his brother’s family. Bob Jr. is now the company president and chief executive officer.

Every member of Western’s management team has first-hand boat experience. This gives the firm a huge edge over its more desk-bound competitors. “When people call the office, they know they’re going to talk to someone that knows what they’re talking about. You have a team of people with well over one hundred years of captaining experience,” he states.

In total, about twenty-five people work at Western’s shipyard. In the summertime, some 180 employees work on the tugs. While tug and barge work slows down in winter, Western tries to maintain a full complement of staff. Workers who are not doing tug work do maintenance and other chores. “In the history of the company, we’ve never laid off one employee,” says Shrewsbury.

It can be hard, however, to find qualified employees. Part of the problem is the time commitment involved. “The nature of the work we do is very specialized … it takes us about five years to train someone to be a mate then another five to be a captain. The work we do – towing barges through narrows in Alaska, going to places in Alaska where not a lot of people go with boats [can be difficult],” says Shrewsbury.

Given the dangerous waters the company sometimes frequents, safety training is paramount. Tug crews regularly participate in safety drills and meetings. The company runs extensive shore drills for crews before they go to sea.

“Man overboard drills, fire drills … before we go out on trips, we will actually jump in the water and have the guys simulate rescuing crew,” says Shrewsbury.

The Western Towboat Company belongs to the American Waterways Operators (AWO), an association based in Arlington, Virginia. AWO member companies have to be compliant with the Responsible Carrier Program (RCP), which is aimed at the tugboat and barge sector. Under the RCP, third-party auditors ensure that companies are living up to program standards in safety training and procedures, equipment maintenance, risk management and documentation.

In addition, Western tugboats contain survival suits (which offer crew protection from cold water) and life rafts. Such measures have had an impact. Shrewsbury proudly notes that the company has never lost a boat at sea or suffered an employee fatality.

New employees learn both on the job and with simulators back on dry land in Seattle. In addition to nautical knowledge, Western employees need to have other skills.

“When we get to southeast Alaska with our freight barges, our crew does all the cargo work. The deckhands work the deck [taking care of cargo] and the captain and mates will drive the forklifts alongside [shore workers] to unload and load the barge,” states Shrewsbury.

Western has been involved in several noteworthy jobs. This past summer, the company sent a tugboat and barge out to Attu, an Alaskan island at the end of the Aleutian chain. Attu saw fighting in World War Two between American and Japanese soldiers. Following a U.S. victory, American troops dumped their equipment and left the place.

With the assistance of a 250-foot landing craft from Lynden, Western removed 10,000 tons of soil contaminated by oil and other residue leaking from abandoned war gear. It was an especially tricky job, given there’s no dock on Attu. According to Shrewsbury, all went well, and the dirty soil was removed as planned and taken to Seattle.

Another noteworthy assignment saw Western ship out to waters off northern Chile some three years ago to pick up the hull of a yacht.

Despite its impressive online presence, Shrewsbury says Western’s reputation is its best form of promotion: “We like to think people know we have the nicest equipment,” he says.

Shrewsbury anticipates that companies will be using tugs and barges for decades to come. It can be very expensive – or simply impractical – to service remote, difficult-to-reach locales with large ships or planes. Plus, tug technology keeps improving.

“The speed we can make from Seattle to Alaska is pretty efficient as far as shipping cargo. It’s only getting faster as the years go by … and the design of barges is getting better and better … we can leave Seattle and be in Ketchikan [Alaska] in a little under three days.”

As for the future of the company, Shrewsbury says, “Right now, we’d like to keep improving on our niche which is Alaska … we talked at one point about having more of a harbor presence, but we just want to focus on what we’re doing now and be the best at it. It works for us. We never wanted to be a huge corporation. We want to be medium size, still a family business and be attainable to the people that work for us.”