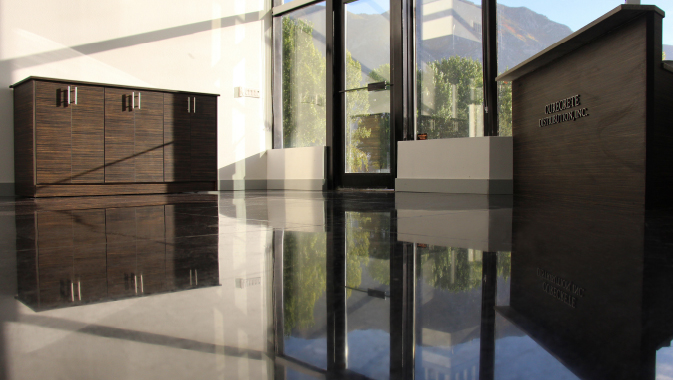 Curecrete Distribution, Inc. is the original concrete densification company. It distributes a variety of concrete floor finishing products which are centered on densified and densified-polished concrete. Its sister company, Curecrete Chemical, is the manufacturer of the products that Curecrete Distribution sells through its global distribution network.
~
Concrete densification is a chemical induced process that produces permanent inorganic crystal growth in the surface pores of the concrete, resulting in a denser, harder, and more durable wear surface. Densified concrete is not achieved by using a topical coating that can wear away with time. Its effects are permanent. With normal foot traffic and wear, a shiny marble-like appearance develops and the crystals within the pores make it very difficult for contaminants like oil, water, and other substances to penetrate it. It also seals in concrete salts, effectively making the concrete dustproof and much easier to clean.

Curecrete Distribution has two flagship products known as Ashford Formula and RetroPlate, which are both uniquely formulated densifiers. The Ashford Formula is most typically used for treating large warehouse-type floors where stronger and more durable exposed concrete surfaces are necessary. When it was created in 1949, it was the first product of its kind designed to harden and densify concrete.

The second densifier offered by Curecrete is RetroPlate. It is part of a larger system of products used primarily for applications where a more sophisticated finish is desired. This look is achieved through the grinding, densification, and polishing of the exposed concrete surface. This concrete polishing system was developed in 1999 and is known worldwide as the RetroPlate System. Like the Ashford Formula, the RetroPlate System is the first of its kind. RetroPlate is engineered differently than the Ashford Formula, in order to achieve and maintain a more aesthetically pleasing polished finish. The concrete polishing process typically includes grinding the top of the concrete surface to expose the desired amount of aggregate or rock within the concrete. This is followed by the densification and polishing of the surface to achieve the desired level of sheen (anywhere from a flat to a glossy finish).

There are endless opportunities for design with the RetroPlate System. For example, some customers choose to seed fragments into the surface of the concrete. These fragments often consist of colored glass, rust-resistant metal, or uniquely colored rock or marble. When these fragments are exposed as part of the grinding process, you can achieve a very artistic and high-end appearance for the floor’s surface. Customers may also choose to color their entire floor or choose to create floor logos, graphics, and patterns by using Curecrete’s specially formulated concrete dyes. RetroPlate is used in retail stores like Wal-Mart and Costco, as well as shops, restaurants, universities, office buildings, museums, and anywhere concrete flooring design is desired.

Aside from its two flagship densification products, the company also carries many supporting products to aid any concrete flooring result. It manufactures and distributes a chemical stripper, concrete clarity enhancer, topical floor protection products, and dye that can be used to color concrete floors almost any color you can imagine. This has the effect of widening the horizon for creativity with concrete floor design. Curecrete also has a full line of concrete repair products for filling spalls, cracks, and joints. It touts a specially formulated cleaner to keep the concrete floor looking new, year after year.

“Our lobby here, for example, is dyed black. This was achieved by grinding the surface to expose the aggregate, treating the surface with black dye, applying the RetroPlate, and completing the process with several polishing steps to produce a really artistic, beautiful looking floor that is just bare concrete,” says Scott Liggett, Chief Executive Officer of Curecrete Distribution.

“The industry has changed quite a bit,” says Scott. “There was no densification industry in 1978 when Jerry Jones started selling it, and he actually created the entire industry. It wasn’t until much later that we started seeing competing products emerge.”

Creating the densification industry is impressive. Even more so is the company’s ability to stay at the forefront of the industry and maintain its leadership role. Curecrete is still considered to be the world leader in concrete densification for its extensive distribution network, its integrity, and the unmatched quality of its products. Even though the Ashford Formula and RetroPlate were the first on the market, no one has been able to duplicate their effectiveness.

Since its humble beginnings, Curecrete has treated concrete for many companies and projects throughout the world. To understand how much concrete the company has actually treated, Scott remarked, “To put that in perspective, we have treated enough concrete to cover a three-foot-wide sidewalk that would go around the equator of the earth about eleven and a half times.”

Its products are sold through independent representatives throughout the United States and Canada. Throughout the rest of the world, Curecrete employs a distribution model, with distributors that work exclusively to promote and sell Ashford Formula, RetroPlate, and Curecrete’s supporting products. It manufactures all of its proprietary formulas at its headquarters in Springville, Utah.

Like many other construction based companies, Curecrete Distribution experienced some decline in sales during the recession. However, the company has shown positive sales growth every year since 2009, and for the last six years, it has experienced record-setting growth. At times, there are definitely growing pains, especially when there are more needs than there are people to fill them.

Jerry Jones sets the tone for a positive workplace culture. He is known for his kindness, honesty, and generosity. He has carefully selected employees whom he believes to be hardworking people of integrity. Jerry fosters a family environment at work, and his positive attitude has affected the entire company.

“With the recession, the construction industry was hit really hard, and because of the family culture, nobody here lost a job, and nobody had to take a pay cut. We all had to tighten our belts a little bit, but you don’t layoff family,” says Scott. There is very little turnover in the company. The average employee has been here between fifteen to twenty years.

Curecrete has won significant awards over the years at the World of Concrete annual construction industry trade show. It was awarded the most innovative product of the year in its category for its unique joint filler product, its specialized concrete cleaner, and its clarity enhancer. Colored joint filler is readily available in the market, but Curecrete’s CreteFill product line allows customers to order the color separately and add it to the filler on the job site. CreteClean Plus comes in bulk and single dosing options which allow customers to combine convenience and unmatched cleaning and conditioning of their concrete surfaces. KickStart clarity enhancer speeds up the grinding and polishing process while it simultaneously delivers a better floor than traditional grinding and polishing methods. “Whenever we come out with a product, it seems to always be very well received, and we have a good reputation in the industry. I think we are the benchmark for best practice, especially when it comes to densification,” says Scott.

Curecrete stands proudly behind its products. It has a twenty-year warranty on its floors which increases to a lifetime warranty if the specialized cleaner is used. Most of its competition offers a two- to five-year warranty or no warranty at all.

“We try to act with integrity in all that we do and try to treat people fairly. We have a policy of being strictly honest, which sometimes means that we miss opportunities, but we certainly always come out with integrity,” says Scott.

Part of its mission to operate with integrity is reflected in its attempts to be as green as possible during manufacturing. Densified concrete is one of the most environmentally-sustainable floor options. Since its results are permanent, there is no need to reapply. Both Ashford Formula and RetroPlate may be applied to new or existing concrete.

In the future, Curecrete plans to continue improving its products and processes to benefit the customer as well as the contractor performing the work. “What is most important to me is the way that we treat other people, that we provide a good product and that people get the very best value for the money that they are spending,” says Scott. At its heart, Curecrete is a pioneering organization that shows no signs of slowing down. Make sure to watch out for more innovative and customer-driven solutions from a company that has truly set the standard for the concrete floor densification industry.