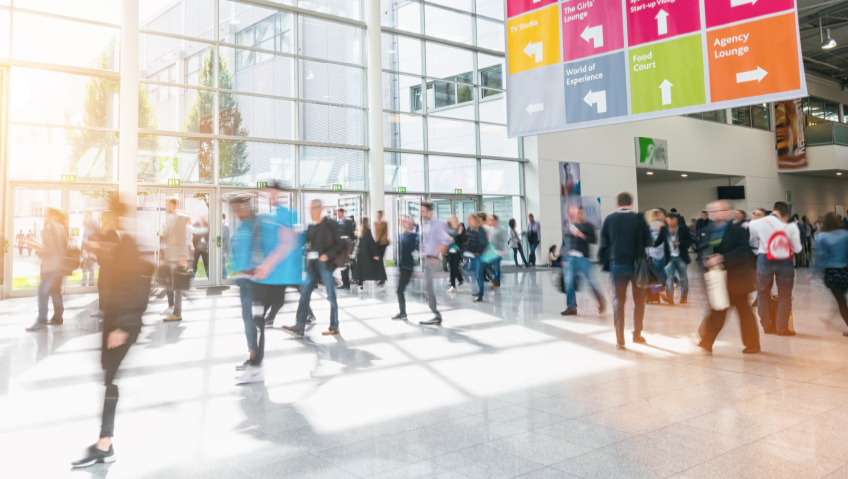 What does a two-pound lobster have in common with an industrial crane weighing 40 tonnes? Truthfully, I can’t come up with a clever answer – they really don’t have much in common.

However, the lobster processors who market them and the crane companies which provide lifting solutions to diverse industries do have one major thing in common, along with thousands of other industries; they all benefit from the unique opportunities trade shows afford to meet clients, build collegial relationships, launch new products, and help maintain supply chains.

Trade shows, however, like many economic sectors were not deemed essential when the economy came to a screeching halt in March 2020. The potential for spreading COVID was simply too high, and we did without. However, non-essential doesn’t mean not important! Trade shows allow businesses such great opportunities to network with clients and vendors alike and to learn about new ideas and innovations.

Since mid- 2021, trade shows have been slowly coming back. As Greg Toplian, CEO of Clarion Events North America said, “Simply nothing replaces face-to face interaction. The past two years have proven that point countless times. While there is some exciting new progress on digital products, they don’t replace the value of meeting in person. Our customers and industries continue to struggle to create the kind of lead generation and customer acquisition that our events provide,” as told to Lisa Plummer Savas for her piece in Trade Show News Network, Trade shows can — and should — be held in person this year, according to industry leaders.

Savas also spoke with Hervé Sedky, president and CEO of Emerald, another leading events organizer, who told her, “One of the key learnings the pandemic demonstrated is the power of human connection, and the vital role relationships and communities play in our everyday lives. As our industry continues to recover and the number of in-person events increases, we are seeing a business practice we took for granted prior to COVID, which is the social, economic and psychosocial value of in person connection, resume.”

But even as the industry recovers, it continues to deal with fall-out from the pandemic, including airline delays and cancellations, causing exhibitors and conference attendees to miss events. Early this past July, for example, New Brunswick’s Minister of Education, Dominic Cardy, angrily took Air Canada to task in an interview with a provincial newspaper for cancelling his flight to Regina, SK and a national education conference, making his province the only one not in attendance. Similar situations were happening in the U.S., where airlines were unable to accommodate July 4th long weekend travellers, as a result of staff laid off during the pandemic and not brought back.

Live lobsters and cranes
When we spoke with Erica Smith, President and owner of Fishermen’s Premium Atlantic Lobster, (FPAL) a multi-million-dollar business, based in south-west Nova Scotia, which exports live lobster around the world, she was happy to report, that with travel restrictions easing, her company in recent months had hosted booths at seafood shows in Boston and Barcelona. (See “How This Female-led Grass Roots Company Grew Into a Multi-million Dollar Live Lobster Exporting Company” in this issue of Business in Focus).

Ted Baxter, who uses his “Lobster1” brand to market exclusively for Smith’s company, considered the important role trade shows play. “For me, a trade show is not always about getting clients, it’s about building relationships, because those relationships will carry over forever.”

For example, he recalls meeting two buyers from California at a pre-pandemic show in Boston, and how that initial conversation with them, “over the years has brought in hundreds of thousands of dollars worth of live lobster, all the result of taking time to chat with them over dinner.” Pre-pandemic, he also went to shows in China and South Korea and the relationships he formed there continued during the pandemic through social media.

That same week, we spoke with Caroline Asimakopoulis, president of M L Crane Group, headquartered in Denver, CO, and Marilyn Wilkes, the company’s marketing specialist, about the role trade shows play in that business. (See “A Nationwide Lift for the Crane Industry,” Construction in Focus, August 2022.)

As Wilkes told us, there are probably over 1,000 trade shows and conferences, both large and small, across the US, which the company could potentially attend, because of the wide range of industries for which the ML Crane Group can provide solutions. Over a wide geographical range, they include the renewable energy, oil and gas, mining, and construction sectors, with construction projects ranging from commercial and residential to capital projects such as bridges and airports.

“But we need to make sure we are going to get out of them what we put in, and go to the ones that will benefit us,” she said. “Typically, we attend about 18, in Texas, Florida, Washington, and Arizona.”

Asimakopoulis added, “As well as meeting customers, we also make strong industry connections. We are in competition with the other companies which will be at the shows, and yet there are times we reach out to them, and they may have to reach out to us for help, so those events are important. I really can’t say enough about how important it is to meet customers, but also to meet other industry people.”

What does a post-pandemic trade show look like?
The biggest challenge event organizers faced as trade shows reopened was how to maintain a healthy and safe environment for both exhibitors and attendees, and to stay abreast of ever-changing health and safety guidelines, which vary from state-to-state and province-to-province. This, of course, can be further complicated by the level of international participation, a critical component for many shows.

As professionals, trade show organizers are committed to providing the safest environments possible and have put protocols in place to ensure that recommendations from the Centres for Disease Control and Prevention (in the US) and from Health Canada, are in place. In addition, they communicate with exhibitors and attendees to hear their specific concerns and have implemented on-site testing, hand sanitation and safe food sampling.

CES 2022, owned and produced by the Consumer Technology Association, and billed as “the world’s most influential technology show”, with an in-person and digital event, kicked off the 2022 season on January 5 – 7, at the Las Vegas Convention Centre and 11 other venues, with 2.9 million square feet of exhibition space. While it was certainly impressive in size and scope, with the latest in tech innovations, it’s important to note that this show was not a super-spreader event, even as Omicron reared its ugly head, leading Anna Huddleston to write, “it is likely to serve as a blueprint for producing large-scale trade shows this year” in her article CES is first show of many kicking off 2022 with health, safety in mind for Trade Show News Network.

The plethora of health and safety protocols in place included proof of vaccination, masks in all indoor areas and on busses and shuttles; attendees encouraged to put a sticker on their badge for preferred mode of engagements: green for handshakes, yellow for elbow and fist-bumps, red for no touching; potentially crowded areas redesigned for social distancing; food served in containers; hand-sanitizing stations, and free RT_PCR tests for attendees who needed them to return to their international destination.

During the holiday season, when there was a rise in COVID cases, there were some exhibitor cancellations, however the Consumer Technology Association decided to still go ahead with the physical event, while shortening it from a four-day event to three.

As Karen Chupka, executive vice-president of CES, told Huddleston, “We talked to medical advisors. We put the right measures in place, and we knew 90 percent of the companies were still there wanting us to hold this event. It shows the value of trade shows that over 2,300 exhibitors, (both global brands and start-ups), came and it was a great show for them.”

To be sure, the numbers were not as large as they had been in 2019, when there had been 4,550 exhibitors and over 100 thousand attendees, but was the first large-scale show after the pandemic, and there were industry representatives from 119 countries, when travel advisories were still being issued. This event certainly stood out, signalling a comeback for the trade and convention industry. In fact, many exhibitors and attendees enjoyed the less crowded venues and felt they had more quality interactions.

“CES 2022 furthered global business this week, as our industry gathered — many for the first time in two years — to collaborate, forge partnerships, make deals and advance the economy,” said Chupka. After two years of not being able to connect in person, we were thrilled to welcome our industry back together again, face-to-face, to experience the latest innovations at CES 2022.”

In the last seven months, since CES 2022 closed in Las Vegas, hundreds of other trade shows and conventions have been held across North America — large-scale ones and much smaller, niche-market ones — and all done safely, with no reports of super-spreader incidents as a result. Hopefully, what we have learned from the pandemic, about how to gather safely and contain spread, can be transferred should a variant or another highly contagious virus come into our midst. While we hope that we won’t see such times again, the business of trade shows and networking will be better equipped in the future.