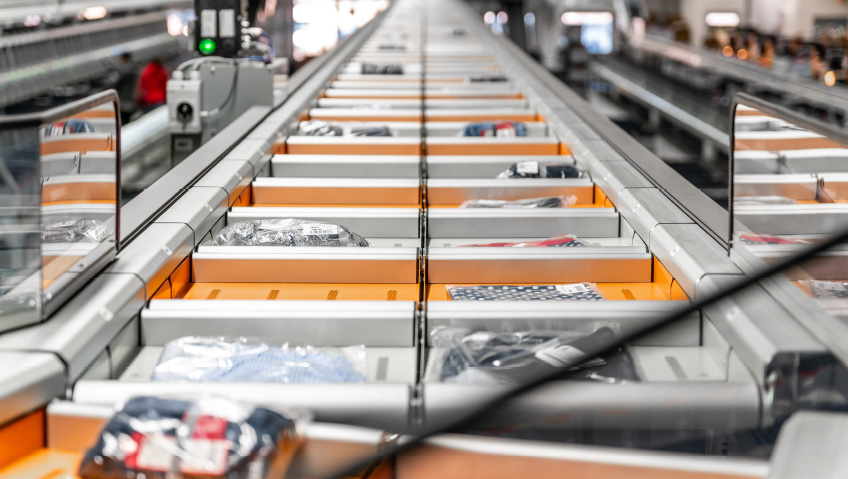 Founded in the Netherlands in 2001 before expanding to a facility near Baltimore, Maryland in 2003, the company now has more than 450 sorters processing millions of items every hour around the globe. It is continuously enhancing and fine-tuning its technology for unrivalled results that adhere to the ideals of simplicity, accuracy, and efficiency, all of which are especially needed in the face of the recent e-commerce explosion coupled with labor shortages.

While these challenges aren’t new, they’ve been greatly exacerbated by the ongoing and lasting impact of the pandemic, creating a bidding war for talent. Add in small parcel sortation growth due to increased volume of e-commerce orders and unpredictable COVID-related absenteeism, and EuroSort’s customers are facing diverse labor challenges that the EuroSort team can help them with.

“The labor shortage is being seen countrywide, and it’s not only in the material handling industry,” says Scott Eisenberg, Regional Account Manager. “You’re always looking for more labor and temps, looking in peak times to ramp up.”

To that end, EuroSort is seeing customers adapt—but if they can’t find labor then the cost for labor really doesn’t matter, Eisenberg adds. In short, if you can’t get a product out the door, you can’t sell it.

To compete for workers, companies are raising hourly wages, specifically during peak time, he says. Companies are moving into industrial developments paying a starting wage $10 per hour more than a lot of companies in the area because they know they have to steal labor.

“If you’re building a new warehouse and most likely competing for labor, then you’re competing by price,” says Eisenberg. “There are some other benefits—like certain warehouses have air conditioning or different, easier jobs—but at the end of the day, most of the time you’re competing in price.”

COVID-related absenteeism is also a problem, with EuroSort customers experiencing, at times, up to 100 warehouse employees out for COVID-related issues. “It’s really hard to run a business if you don’t know who’s going to show up, and it could be half of your labor force.”

EuroSort is in the unique position of selling directly to companies looking for a sorter as well as working with integrators, users and consultants. “A lot of companies out there just sell whatever they have as far as what they manufacture, what’s in their toolbox,” says Greg Meyer, President of Sales. “We actually have another tool for them to put in their toolbox, which could be the right tool for their overall solution.”

As a result, companies are increasingly bringing EuroSort in as a subject matter expert. “They’re feeling more and more comfortable that we’re not going to try and go around them,” says Meyer. “Currently, we help streamline the process versus playing telephone.”

Much of this stems from small parcel growth—due in part to COVID’s effects—which has substantially grown the company’s business in small parcel sortation.

“The volume of smaller parcels has increased, and that’s where we focus our sorters right now,” explains Meyer. “They tend to perform best with smaller, harder-to-sort products like poly bags and irregulars that a lot of other technology on the market can’t really sort. So it’s a manual process for others.”

Traditionally, sorters have been either manual or conveyor-fed induction with a manual pack-out because that was the cheap and efficient way to do things. Ongoing labor issues are creating a push to automate as much as possible, says Eisenberg, with EuroSort focusing on three areas: picking, induction—when items get put on to the sorter—and pack-out, when the order is packed off the sorter.

The picking side offers numerous robotics options including goods to man, exotec, shuttles, geek +, autostore, AS/RS, and fabric, technology that isn’t cheap, but by eliminating touches the ROI has made more and more sense, says Eisenberg.

“We’re also seeing that the increase in warehouse costs has pushed for people to do more in their current warehouse,” he observes. “Having an automated pick allows for much more dense storage of items, eliminating rows of forklift aisles and allowing a much tighter footprint of the overall automation.”

EuroSort’s machines enable employees to work alongside them, Eisenberg explains. “Our machines don’t work by themselves.”

Meyer agrees. “A lot of times when we come on site people may think they’re going to lose their jobs because there are these machines coming in to take their jobs,” he says. “Really, what the machines are doing is helping the people who work there do more.”

With the recent growth in small parcel and item sortation, EuroSort is seeing facilities aim to increase their outbound packages by 30 to 40 percent. “The option with a manual solution is hiring 40 percent more people… or you install automation and the same people that have already been working there can now do more with the same crew,” says Eisenberg.

In fact, automation has actually complemented the workforce and allowed companies to grow, adds Meyer. “It’s taking up less space and making it more efficient and making jobs easier,” he explains. “Some of these jobs can be pretty labor-intensive and our system helps alleviate that a little bit.”

On the picking side, the shift toward integrating automation is happening in every industry that EuroSort works in, and it’s thriving because it makes so much sense, particularly when combining the picking with the sorter.

Picking—getting items sent to the sorter so the sorter can get it down to a group of orders or an individual order for pack-out—is another area where robotics are being used, particularly to help feed the sorter, a monotonous task that’s perfect for a robot. EuroSort has developed devices and tools that work in conjunction with their sorter that help robots work more effectively.

Pack-out, which involves getting items from the sorter and into a polybag or carton via chutes, is another area of labor where robots are useful, allowing employees to work in other areas of the building and also provide a lights-out facility. “We have customers working toward that… they want to be able to run it 100 percent of the time and never have to worry about shifts or changeovers,” says Eisenberg.

EuroSort works closely with its customers on all equipment, carefully designing each piece with options available depending on the product mix and application, making recommendations for specific needs.

“Unlike a linear sorter, our sorters can be essentially whatever shape the customer needs,” Eisenberg says. “We’re also looking at building layout and the process. We have some customers that pick in two different areas and want induction in two different areas and not a whole lot of conveyer to feed those.” Customer constraints might include low ceiling height or lack of a dock door, and working to find solutions means seeking out what makes sense for that particular customer and not just an off-the-shelf solution.

The layout and sorter are both custom to the business, but when looking at induction and how items are getting on the sorter, that’s also specific to how customers are doing things, so just like their product mix or product type dictates what type of sorter EuroSort is using, the type of induction is also based on product type.

“Something like an auto induction works really well for parcels or packages, easy to handle items, but doesn’t work particularly well for accessories or jewelry or even apparel,” says Eisenberg.

EuroSort is also extremely proud of its chutes, another aspect the company customizes. Books, for instance, can’t slide because they’ll get scratched or the dust cover pulled off. “It could also be based on the space available,” says Eisenberg. “We’ve had customers where the only space available was directly under the sorter loop and so we had to figure out a way to get the accumulation we needed in the chute directly in that loop.”

In the last year, EuroSort has also developed a patented device called the pitch reducer, which reduces the length of each chute by up to 40 percent, allowing reduction of the overall sorter size drastically.

Although the company has encountered its share of supply chain issues, with higher raw material prices and difficulty obtaining electronic parts, it’s also experienced numerous recent accomplishments, including passing the 200 mark for installations in North America. EuroSort is also doing business with six of the seven top pharmacies in North America, and has developed its own in-house software package in the last five years.

“We’re continuing to grow and be profitable with a lot of new patented technologies like the pitch reducer, and we’ve got some other ones that we will be announcing soon as well,” says Meyer. “We’re also coming up on our 20th anniversary next year, with some new technologies that we have been in the pipeline based on our customers’ needs and requests. We’re very customer-centric.”

While it’s a given that EuroSort’s technology sets the company apart from the competition, it’s really the people, says Meyer. “It’s the team. It’s our employees. Many of our folks have been here for quite a number of years, and the new talent that we’ve added takes us to another level,” he adds.

“Being small and nimble means we’re flexible to respond to all the challenges and opportunities that are out there,” says Meyer. “We focus on the customers and make sure they get what they need. That’s what makes our business, what makes us run. A happy customer helps us achieve our goals.”