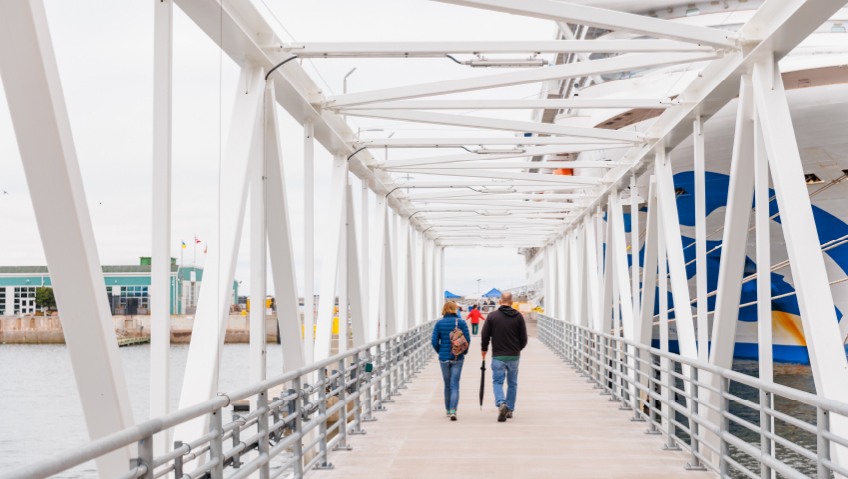 The independent, non-profit organization, with what he calls a “lean but mighty staff of four and a half full-time employees,” manages the marine gateway to Prince Edward Island, Canada’s smallest province on the east coast, which serves as both an industrial and cruise port.

As an industrial port, it has long supported the construction industry, accepting shipments of aggregate stone for roads, highways, and building site preparation, fertilizer for the agricultural industry, and most of the petroleum products required to meet the island’s needs. As these are essential items, the port remains open year-round—with some assistance from the Canadian Coast Guard icebreakers in January and February!

Coming of the cruise ships

In September 2007, two years after the federal government divested itself of the port, the port authority opened a cruise ship terminal, a real game changer for island tourism. Proceeds from the cruise industry have proven to be an economic driver for the tourism industry overall, which accounts for 6.2 percent of the province’s GDP, a sizeable amount compared with tourism across Canada which only contributes two percent to the national GDP.

Cochrane says when he arrived at the port in 2018, “we started on an expansion—our second major expansion in 15 years—to increase our berthing capacity, because of the increase in cruise traffic, and now we can accept two 300-plus meter-long vessels simultaneously. Berthing is the preferred method because when a ship ties up at berth it’s solid. It’s not anchorage, and it provides security and efficiency for the lines and a better passenger experience as they disembark and get into the community more quickly.”

Also, in 2018 the port authority acquired a historic railway station from the early 1900s, a 16,000 square foot facility within a two-minute walk, and invested heavily, turning it into a market and food hall to enhance visitors’ experience.

“We felt it was a priority for the port to engage in this and we also invested in the boardwalks, widening them and making a pedestrian plaza that creates a welcoming landscape for the waterfront.”

For over a hundred years, tourists have been coming to “the island”, as locals refer to their home, most recently by ferry from New Brunswick or Nova Scotia; by air to the Charlottetown airport; and since 1997 via the 12.9 km (8.0 mile) Confederation Bridge across the Northumberland Strait between New Brunswick and Borden-Carleton, PEI, the longest bridge in the world over ice-covered water.

The opening of the cruise terminal, however, had a huge multiplier effect on tourism numbers. Cruises originating in Montreal and Quebec City, in Boston and Baltimore, and in Southampton, England and Rotterdam in The Netherlands, are bringing thousands and thousands of passengers to the island who might never have travelled there otherwise.

And while it’s true that they only spend a day there, many fall in love with PEI’s charms and plan to return for more extended holidays, with some considering purchasing real estate, so there’s a major spinoff effect.

“This is the success story for Charlottetown and the province,” says Cochrane, referencing a 92-percent increase in passenger traffic between 2016 and 2019. “It speaks volumes about the fact that international cruise lines recognize just how attractive PEI is, and why it’s a worthwhile passenger experience.”

With cruise liners docking between 7 and 9 am and not departing until between 4 to 6 pm passengers can sample some of the island’s delights through a variety of excursions offered by local tour operators.

One, for example, includes a scenic drive through rolling farmlands and past bustling harbours to the miles-long pristine beaches and dunes of PEI National Park on the North Shore; woodland trails and the restored homestead of Anne of Green Gables in Cavendish.

Meanwhile the more adventurous can sign up for a sea kayaking lesson and learn about the island’s ecosystem as they explore beaches and dunes beneath red cliffs, keeping an eye open for herons and perhaps a glimpse of a red fox.

Alternatively, there are guided tours of historic Charlottetown, the birthplace of Confederation. Passengers can choose a ride on a double-decker bus, on a horse-drawn trolley behind a team of Clydesdales, or take a ride on a Harbour Hippo—a land and sea Duck Boat tour.

If passengers prefer to explore it their own way, that’s easy, too. Charlottetown is a wonderfully small, safe, and walkable city.

Beginning at Peake’s Wharf where vendors are located, visitors can spend absorbing hours wandering the shops for high-quality artisanal items and gourmet foods produced on the island; dining on fresh PEI lobster, Malpeque Bay oysters, or blue mussels, along with PEI potatoes, in one of Charlottetown’s many restaurants and sidewalk cafés; and visiting art galleries, including “the other one” in the Confederation Centre of the Arts—the only other national gallery in Canada beside Ottawa’s.

That year, in a season that spanned April to November, there were 87 ship calls, bringing 128,000 passengers and 60,000 crew members, with 45 to 50 percent of them choosing to combine a morning excursion outside Charlottetown with returning for an afternoon in the city.

The average passenger, according to Cochrane, spends $104, while the average crew member spends about $81, with total spending in 2019 at $13.8 million.

There was a collective sigh of relief on PEI when the global cruise industry announced its recovery plans late in 2021, and when the first cruise ships returned in April.

The financial tallies for 2022 were not yet available at the time of writing, but with 74 ships scheduled to arrive carrying a projected 117,598 passengers along with 60,000 crew, it appears the industry will achieve around 91 percent of the 2019 number.

That number, however, may be somewhat adversely affected since some ships were rerouted as a result of Hurricane Fiona which battered parts of Atlantic Canada in late September.

The Atlantic Canada Opportunities Agency (ACOA) is a federal government agency that works to create opportunities for economic growth in the region by championing the strengths of Atlantic Canada, and since tourism is one of PEI’s strengths, a partnership with Port Charlottetown is a natural fit.

“The port would not be where it is without the investments of ACOA, which is a strategic partner in tourism with PEI,” Cochrane says. “Without their continued support of our infrastructure, I don’t think this would be possible. They helped create a very successful environment and their willingness to be involved in strategic directions that help increase tourism overall, along with the landscape and waterfront improvement, is significant.

“The proof is in the pudding when you look back and see that passenger increase of 92 percent in those three years, 2016 to 2019. It means that something was being done right. We can’t thank the people at ACOA enough for their efforts because they are always there to listen, to help find a solution, and to help with investments to move forward.”

Cochrane is feeling optimistic as he looks forward to 2023. A native of Newfoundland, he’s lived in PEI for the last 25 years, his children are “islanders” and he’s passionate about promoting his adopted homeland as a premier tourist destination.

“We love our job here,” he says of his staff and himself. “There’s an energy to working in the marine world; it’s exciting. Every day I come to work is a fabulous day, and it’s still a fabulous day when I go home at night,” he shares.

“Balancing all the needs of operating a port can be challenging because we want a customer-centric focus, we want them to be happy, and we also want to see our community benefit. Keeping those things in mind is how we make our strategic decisions.”

Some of those decisions in the future will consider the cruise industry’s path toward net zero carbon emissions by 2050. “We must plan for a future that will put us on that path as well,” he says, “and we’re looking at opportunities where we can assist. Providing shore power to the liners is part of that conversation. We don’t offer it currently, but we are engaged in the discussion to look at another infrastructure investment to do that. We want to remain both competitive and sustainable as a destination because it’s the right thing to do.”