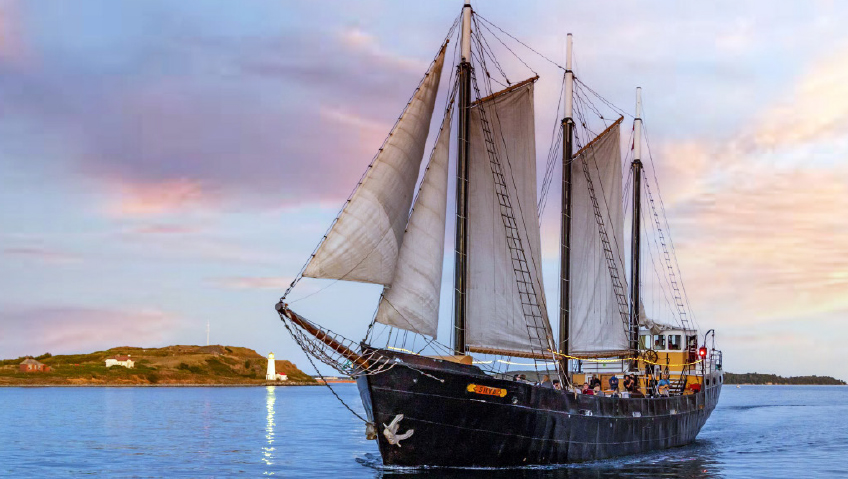 Since its 1984 founding, the company has steadily built a solid reputation for excellent customer service and enticing venues. Its signature ‘Harbour Hopper’ tours use repurposed military amphibious vehicles to—as the name implies—traverse Halifax, Dartmouth, and the harbour separating them.

The company’s versatile ‘hop on, hop off’ bus tours provide customers with the flexibility to explore Halifax on their schedule. From seasonal ghost tours to dinner cruises and weddings, Ambassatours has something for everyone thanks to its large array of vehicles and harbour cruisers.

Ambassatours has expanded from its Haligonian roots and now provides tourism excursions in all four Atlantic Canadian provinces. As cruise ships return to the region in greater numbers, so too are the company’s operations and staffing numbers growing. Founder and Chief Executive Officer Dennis Campbell remarks that Ambassatours’ growth and success come down to the value the company generates for cruise ships. “Nobody else achieves the level we achieve per cruise arrival,” he says. “It’s all about [return on investment] for the cruise line.”

This return on investment is also possible through Ambassatours’ exceptional customer service. Its focus on passenger satisfaction has won it numerous awards over the years, most recently Tripadvisor’s Traveller’s Choice Award in 2022. Part of this is due to its ongoing effort to solicit feedback and incorporate changes. This policy has led to many of the company’s latest offerings, such as its regular excursion to historic Georges Island, Canada’s newest national park, in Halifax harbour.

As a result of its exceptional customer service and long history in the region, Ambassatours has developed strong working relationships with the various cruise lines frequenting Atlantic Canada’s major ports of Halifax and Sydney in Nova Scotia, Saint John in New Brunswick, and Charlottetown in Prince Edward Island. In Halifax, the region’s largest tourist destination, the company’s trademark service is its pier-side sales.

When a cruise liner arrives, Ambassatours’ representatives have arrangements with the lines to be able to sell packages to passengers without charging any fees upfront; all charges go instead to the passengers’ cabins. This direct and simple approach helps undecided or busy passengers take stock of the company’s offerings while in Nova Scotia. “It’s not uncommon for us to generate another $14,000 to $15,000 in sales,” Campbell says, adding that sales occasionally go as high as $17,000.

Further, Ambassatours’ partnership with Gray Line provides old-fashioned double-decker motor coaches for the company’s ‘hop on, hop off’ tour programs. These buses, available right at the pier and departing throughout the day, provide passengers with the convenience of jumping on a tour immediately after disembarking, maximizing their time in port. The buses are a particularly welcome sight to American visitors, given Gray Line’s household name status in the U.S. providing a sense of security in an unfamiliar city.

Ambassatours’ packages include not only a myriad of tours around Halifax, but also short excursions to surrounding areas such as Lunenburg, Oak Island, Georges Island, and Peggy’s Cove, Nova Scotia’s premier tourist attraction. Peggy’s Cove, in particular, has experienced a huge redevelopment, adding a beautiful new visitor look-off platform, creating a far better and safer visitor experience, with parking lots, sidewalks, restrooms, and new safety features to keep visitors off of the infamously slick black rocks.

“It’s fantastic. The visitor experience there is way better and way safer,” Campbell says, noting that the previous facilities were woefully unequipped for large numbers of visitors. Today, Ambassatours is adding new ways to move and spread guests throughout communities for a greater visitor experience, expanded economic impact and overall satisfaction for all stakeholders. Campbell anticipates having the addition ready by summer 2023.

Newer additions to Ambassatours’ repertoire are programs focusing on the communities and accomplishments of the region’s residents who are Black, Indigenous, or People of Colour. “We tell our guides now: ‘You really should not do a tour without recognizing that we are touring and travelling on Mi’kmaq unceded territory land,’” he says. Land acknowledgements, common in many Canadian formal events but novel for foreigners, provide an opportunity for conversation, education, and representation.

Ambassatours’ staff is educating new generations on forgotten chapters of Atlantic Canadian history. “Helping to explain them is all part of the fabric of this area and a very important part too.”

Ambassatours’ resources were put to the test during Hurricane Fiona, which battered Nova Scotia and forced 71 liners to cancel their dockings. “We went from what was a great recovery season, to all of a sudden losing $1.4 million worth of revenue,” Campbell says. Yet in the volatile tourism industry, fortune comes as quickly as it goes; just one week later, the company received word it would be responsible for all shuttles and ferrying in October when Halifax played host for several days to the newly-commissioned USS Gerald R. Ford, the world’s largest aircraft carrier with a crew of over 5500 sailors, 24 hours per day for four days.

The company can accommodate increasing numbers of cruise passengers due to its highly-trained staff. It has established a reputation as a top regional employer, particularly for younger workers. “We really have done, I think, a really good job in becoming known as the place for university students to work,” Campbell says. Ambassatours’ competitive salaries, vibrant workplace culture, and informal role as Atlantic Canadian Ambassador consistently bring in top talent.

While these students swell the company’s ranks in the heavy summer months, the heaviest traffic comes in early autumn—when the students have returned to school. But Campbell and his staff are also working to court Nova Scotia’s growing number of retirees. These combined demographics provide regular turnover in Ambassatour’s ranks. “Spring and summer, we have university students, and in the fall, we have invested very, very much over the years to hire retired people,” he says.

The company’s large database of retired professionals—teachers, lawyers, and corporate professionals—brings their expertise to Ambassatours’ offices, just in time for the main cruise ship season in September-October. “Having that mix of employment is critical to our business,” he says. “Without the students, I don’t know how we would do it in the spring and summer. Without the retired folks, I don’t know how we’d do the cruise ship business.”

As Ambassatours grows, so too does its pledge to redevelop and expand Halifax’s waterfront. This public-private partnership has already invested significantly in the area, and new developments such as the $200 million Queen’s Marque development are starting to bear fruit with new restaurants, cafes, and attractions for pedestrians.

“Halifax boardwalk, I would argue, is now the best waterfront boardwalk in the country,” Campbell says. After two low years, he and his team are enjoying the city’s resurgence. “Halifax’s time has come. I think the region’s time has come,” he adds.

As Halifax harbour expands, Ambassatours is now looking at expanding its fleet to cater to more visitors. “Halifax Harbour has a lot more upward potential, in terms of meeting the demand,” and the demand is returning with gusto. “This season, we were sold out days in advance for most products,” he says. “Now it’s time to add capacity.”

Apart from its involvement in the harbour expansion, the company is also working on providing off-port docking tenders for cruise liners and using its fleet to ferry passengers to and from ships. “Cruise ships don’t prefer to tender,” Campbell admits, “but to get to a marquee port like Halifax, they will tender rather than not come.”

But if ships are tendered rather than docked, passengers can be ferried to and from other parts of the waterfront. “We can spread the people out, and that spreads the investment out.” The possibility of new cruise berths on the Dartmouth side of the harbour promises an economic generator not just for the Halifax Regional Municipality but for the Annapolis Valley and greater Nova Scotia. Atlantic Canada’s other ports currently have cruise berths that have had over $20 million in investment.  “Now it’s Halifax’s turn,” he says. “When Halifax steps up and does it, it’ll benefit everyone.”

Ambassatours has expanded from humble beginnings to become the premier tourism provider across Atlantic Canada. With its superior customer service, a wide range of activities, and exceptional staff, the company is well-suited to accommodate the return of bigger cruise ships to the region.

Campbell notes that, after two years of quarantine, the public is anxious to travel even as worries of a recession cloud the horizon. “The pent-up demand is still there,” he says, “and I predict even through a recession, we’re going to see that pent-up demand continue for some time.”