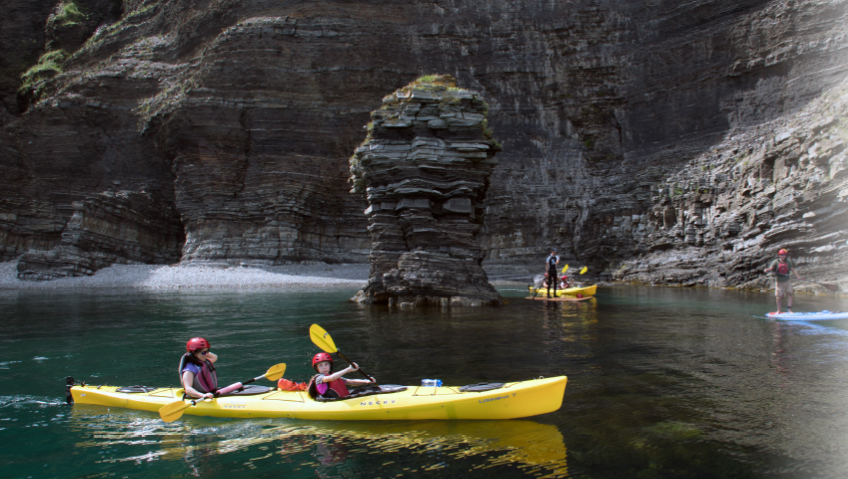 For this, there are countless reasons. Located in close proximity to St. John’s, the provincial capital, residents enjoy the best of both worlds—a rural community boasting urban amenities. The community is small but mighty, and as Mayor Darrin Bent explains, it “punches above its weight.”

Investing in the future

Mayor Bent genuinely believes that Conception Bay South is “a great place to do business, but the absolute best place to raise a family and live,” thanks to its natural endowments, its rich, vibrant sense of community, its well-developed infrastructure, and its never-ending commitment to growth and prosperity—all of this in addition to a leadership team that is focused on the future.

As a result, Conception Bay South is “bucking the trend when it comes to the economy in terms of housing starts and housing sales,” Mayor Bent explains, with new residents flocking to the shores of Conception Bay to enjoy the quality of life it affords.

To sustain this growth and preserve the quality of life that residents and visitors revere, leadership focuses on development that makes sense for Conception Bay South by making strategic investments that will serve the community long into the future. One of these investments is a new community park that will feature Newfoundland and Labrador’s first combination refrigerated outdoor rink + splash pad. At over 11,000 square feet, it’s one of the province’s largest inclusive play areas, and is set to open just in time for residents to enjoy the winter season.

Another highly anticipated investment within Conception Bay South is a new library that has been years in the making. As Mayor Bent states, “This will be a fantastic cultural addition to our community and something our residents have been seeking for some time,” noting that there are 8,000 regular library users who will take advantage of the library space.

More than just a depository for books, the library will be an invaluable resource that offers broadband access, computers and technology, study spaces, and indoor and outdoor facilities that offer spectacular views of the bay. The building, which will be a focal point in the community for years to come, will be named in honour of Clarence J. Morgan of the Morgan Group of Companies for his economic and philanthropic contributions to Conception Bay South.

Over the last seven years, Conception Bay South has also built a new town hall, an arena, and a state-of-the-art fire department that operates 24/7. The Town has plans to work with provincial and federal partners to build a new regional community center, which is currently in the funding process, to ensure residents have all they need to thrive.

Further to investing in the community, Conception Bay South is bolstering its position as a strategic place to do business. Efforts are underway to expand the commercial, retail, and industrial base of the community to strengthen the local tax base by offering an increased diversity of services for its residents, which will in turn drive job creation and strengthen the local economy.

Further to the unmatched level of local support available for prospective and existing businesses, Conception Bay South boasts numerous logistical advantages, with transportation and access available by sea, land, and air via its world-class Port of Long Pond, St. John’s International Airport, and the area’s extensive highway and roadway systems.

“We have spent millions of dollars over the past five years upgrading all of our major connector routes, which is incredibly important for supply chains and access to the Port of Long Pond, where we anticipate an increased in economic activity over the next twelve months with a re-brand and cold storage facility,” says Mayor Bent.

He continues, “All of our main connector roads that go in and out of Conception Bay South connect to a major bypass which connects to all other major routes on the Northeast Avalon, and we feel that connection puts us in an absolutely wonderful position to attract more industry and more business to the Town.”

In addition to optimal connectivity, there is a 57-acre industrial park that offers development-ready sites and leasing opportunities, as well as an available workforce that is ready and willing to step into action. And, from Mayor Bent’s perspective, “A job in Conception Bay South is an incredible benefit for our large work force; jobs at home help boost the local economy and create activity. With the rising cost of fuels, jobs right here at home mean a lot to our residents.”

With better jobs, an enviable quality of life, and all the amenities of an urban center with the small-town feel and pace of a rural community, Conception Bay South truly is the place to be, with favourable weather patterns all year long.

“Our climate is the envy of the entire area,” states Mayor Bent. Conception Bay South’s ideal location results in less snow and rain and more sun than the surrounding communities, and typically warmer weather within the region, without the fog which is characteristic in the eastern part of the region.

Luckily, there’s no shortage of places to enjoy the weather in Conception Bay South! The community boasts 24 kilometers of groomed trails maintained by the Grand Concourse Authority that are perfect for non-motorized activities year-round. Likewise, Manuels River Hibernia Interpretation Centre is home to 650 million years of geological history, waterfalls, and hiking trails that are not to be missed.

Conception Bay South aims to be known as the recreational boating capital of the province, being home to the Royal Newfoundland Yacht Club and many other marinas and boat launches that connect residents with the recreation and beauty being located on the coast affords.

One of the greatest assets making Conception Bay South attractive is the sense of community and partnership that is at the foundation of the community’s character and growth. Among these partners is the Atlantic Canada Opportunities Agency (ACOA), a branch of the federal government that offers funding and support for number of local initiatives.

ACOA has been instrumental in working with the Town to execute many of its goals and objectives when it comes to economic development efforts and the enhancement of tourism assets, specifically related to the T’Railway Redevelopment Project, Main Street Improvement Plan and Manuels River Hibernia Interpretation Centre.

Mayor Bent also acknowledges other government entities that work tirelessly to advance and promote Conception Bay South as a tourist destination, a sound place to invest and set up shop, and an even better place to call home. Development would not be possible, he says, without the support of the provincial government departments of Tourism, Culture and Recreation, and Industry, Energy and Technology, as well as industry partnerships including with Hospitality Newfoundland and Labrador, Destination St. John’s, Legendary Coasts of Eastern Newfoundland, Conception Bay Chamber of Commerce, Downtown CBS, and the local school board, which is responsible for nine schools and 5,000 K-12 students.

Together, stakeholders are invested in making Conception Bay South a fantastic place to be whether it is for business, residence, or recreation. With one foot in the present and another prepared to step into the future, the Town has come a long way and its trajectory shows even greater promise.

Conception Bay South incorporated in 1973 when the communities of Topsail, Chamberlains, Manuels, Long Pond, Foxtrap, Kelligrews, Upper Gullies, Lawrence Pond, and Seal Cove came together, which means next year will be an opportunity to celebrate fifty years as a collective municipality. It is a chance to look at how far Conception Bay South has come and build anticipation for the community’s future.

While there has been no official announcement, it is certain to be a celebration like no other. Existing festivals like Winterfest, Kelligrews Soiree, and more will be magnified. Conception Bay South aims to deliver an unforgettable experience that honours its fifty years of incorporation and the much longer histories of each respective community.

Without a doubt, it is an exciting time to call Conception Bay South home. As the community comes together to celebrate its history and accomplishments, others will be taking notice as it asserts itself as a world-class destination.