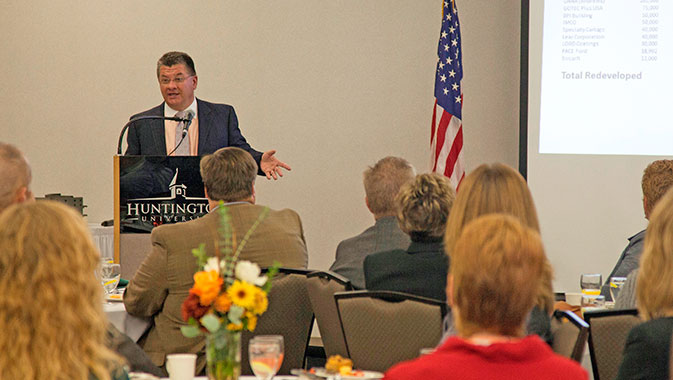 With a population just over 35,000 people in an area of 384 square miles, Huntington County is small but mighty. The county boasts a multitude of assets and as a result is a great opportunity as a great place to live, work and invest.
~
Located in the heart of the Great Lakes, Huntington County’s location offers ready access to infrastructure and larger markets across the state, the nation and the globe. The county is ideally positioned between the large metropolitan centers of Indianapolis, Chicago, Detroit, Cincinnati and Louisville, each of which is within a few hours’ drive. As such, Huntington County enjoys the services and amenities of these larger centers while maintaining its unique small community flavor.

Huntington County has always been considered a strategic location from the time of the area’s first inhabitants, the Miami Nation, who relied on the area’s rivers as transportation routes. As the economy changed, so too did the local and regional infrastructure to support it. Rail infrastructure served as an important catalyst for the area’s growth, leading to the steel and automotive industries. With the construction of the state, national and interstate highway systems, the county’s transportation network became even greater.

In the 1970s, the Erie Lackawanna Railroad Corporation closed, resulting in devastating job losses that left Huntington County particularly hard hit. It was then that leadership made the decision to invest in the county to stimulate economic activity and job creation, and efforts were undertaken to develop an industrial park in Huntington County.

A private entity was formed in the 1980s to develop a 200-acre site that would become the very successful Riverfork Industrial Park. This moment marked an important milestone, as it ultimately led to the formation of the Huntington County Economic Development Corporation (HCEDC) in 1997.

“Our community transformed from a railroad town into a more diverse manufacturing and agricultural community,” explained Mark Wickersham, HCEDC’s executive director. “Once the for-profit entity that developed the Riverfork Industrial Park went out of business, the project transitioned to a committee of the chamber of commerce known as the Lime City Development Committee.”

The Lime City Development Committee eventually became a non-profit organization, separating itself from the Huntington County Chamber of Commerce to become the HCEDC. It was the first of many initiatives that spurred economic optimism and generated renewal in the county.

HCEDC has been a great support to local business and industry, encouraging job development and capital investment in the county. Its vision is to make Huntington County a better place to live and work, and, as it approaches its twentieth year in operation, the corporation continues to contribute to the county’s economic strength and community viability.

The corporation has assisted in the creation of 2,000 new jobs, helped to retain 7,000 existing jobs, secured investments exceeding $150 million and redeveloped over two million square feet of vacant industrial space. As Wickersham described it: “In an economic development sense, we boil it down to three things: location, workforce and value.”

“Ultimately, you have to have the combination of the three things coming together for a successful project for a corporation. The location has to be correct logistically; you have to have the workforce available, and it all has to be done in a value proposition that makes sense for everyone involved,” he explained.

Beyond location and workforce, Huntington County has a low-tax environment. “Our aggressive, pro-business leadership in the state, with the governor and his team in the General Assembly, all combine to help an already asset-rich region better market itself, continuing to enhance the vibrancy of our economic base,” Wickersham stated.

Indiana was recognized as one of the top ten pro-business states by Pollina Corporate, as well as the best place to do business in the Midwest and fifth nationwide. CNBC America ranked Indiana a top state for business and the fifth most business-friendly state for its competitive tax environment and low industrial energy rates.

“As our unemployment rate dropped; the number of people in the workforce has gone up, and I think that is a reflection of having job opportunities available. At the moment, every major employer in Huntington County has positions open and available that they are trying to fill, and that is incredibly helpful,” Wickersham said.

Huntington County supports logistics and distribution, making it home to companies like Dayton Freight Corporation; manufacturing and industrial, which accounts for thirty-eight percent of the county’s economic composition; agriculture, which is the second largest economic sector at thirty percent; food processing; aggregates; and petroleum refining and distribution, which is based on the Buckeye pipeline.

Huntington County is also home to a small but growing aviation cluster at its airport, a very significant asset for a community of its size. The county has an ever-increasing healthcare-related sector which features Parkview Health Systems and orthopedic device company Incipio Devices.

Also found here are Dean’s Foods dairy processors and Echo Lake Food which processes eggs for breakfast foods. “We’re breaking 1.2 million eggs every day in Huntington at the Echo Lakes Food plant,” said Wickersham. The area is known for pork production, as well as grains, wheat, corn and soybeans. It is also rich in limestone and mineral aggregates, making this the reason the Lime City nickname came to be.

Huntington University is a faith-based institution of higher learning that prepares students spiritually, academically and professionally. This further strengthens the county’s available workforce and serves as another substantial asset of the community.

None of the economic growth and success that has been experienced in Huntington County over the years would have been possible without the strategic partnerships that Wickersham credits. “At the state level, the Indiana Economic Development Corporation has been very aggressive and very creating, working together with communities our size to make sure that, just because we are a small market, doesn’t mean we get left behind,” he explained.

“Regionally, we are a partner in a collaborative group called the Northeast Indiana Regional Partnership. The number one issue that the partnership has solved for us is, within the eleven-county market in the northeast corner of the State of Indiana, we no longer compete with each other.”

Due to this collaboration, a lead from a neighboring county resulted in Huntington County welcoming MetroNet, a $12 million telecommunications company that installs fibre to the premises and provides high-speed broadband that is highly attractive to many companies.

“That’s been a great opportunity for us,” he said. “The collaboration also led to the creation, by the state legislature, called the Regional Cities Initiative. The State of Indiana has deployed over $42 million, over a two-and-a-half-year period, for three regional communities to use to try to go at opportunities for quality of life and quality of place assets.”

On a local level, to further support the ongoing efforts of the county and the state, community-based initiatives have been undertaken to improve further the quality of life and attractiveness of the county.

“The City of Huntington – our county seat – is working on a comprehensive approach to things like gateway corridor enhancements, downtown revitalization projects, parks and recreation opportunities. They are doubling the size of our trail systems, and that works for bicycling and outdoor hiking, walking, jogging, et cetera,” Wickersham said.

Residents and visitors of Huntington County can experience a weekly farmers’ market, shopping, interesting historical and cultural features as well as a variety of culinary treats, one of which is a craft soda fountain. Huntington County’s own Nick’s Kitchen was recognized as having the best pork tenderloin sandwich in the State of Indiana!

Huntington County is developing in line with a comprehensive strategy, building on the momentum that has resulted in it once again become a thriving, prosperous region. The next step for leadership is to identify new growth opportunities that can be used for continued growth and prosperity.

A commitment of $1.3 million has been made to build a new vocational training center to support local workforce training and development. The center will focus on industrial engineering, CNC machining and welding and will have a healthcare component. The facility is under construction with completion expected by mid-June.

“We are hoping that with the efforts to locate land that could become an industrial park and fund a training feeder system to create the workforce for the future, our future will look really bright,” Wickersham concluded. “We’ve been tested before; we’re tested now, and we’re moving forward as aggressively and creatively as we can.”