Delivering the Best from the Lakes 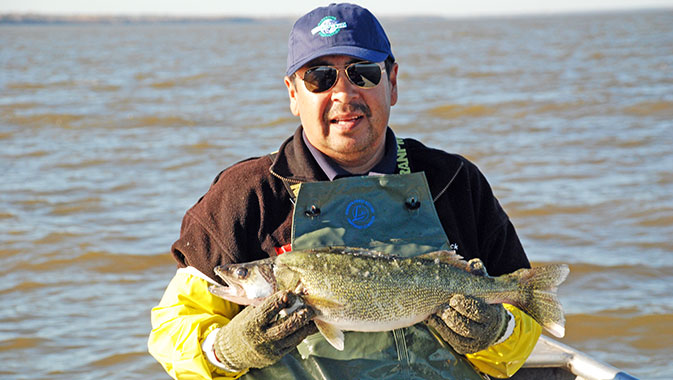 When one thinks about Canada’s natural resources, what often comes to mind are hydroelectric power, iron ore, natural gas, petroleum, and timber. Certainly, all of these are valuable economic assets to this country…
~
Deserving of equal consideration is this country’s resource of freshwater fish, a resource so plentiful that it played a vital role in the establishment of settlements throughout the nation. The country is home to thousands of lakes, rivers and streams, which quickly led to the growth of significant numbers of commercial freshwater fisheries and Canada being known as a leading fishing nation.

It is in Manitoba, the land of 100,000 lakes, that the majestic Lake Winnipeg is found, and this is home to the largest freshwater commercial fishery in Western Canada. It is in the province’s capital of Winnipeg that the Crown corporation Freshwater Fish Marketing Corporation (Freshwater) is headquartered.

The FFMA is a means of guaranteeing the purchase of all commercially caught freshwater fish. Before the act, purchase prices would change without notice, and sometimes fishermen would not be paid if buying agents went out of business. This came at a cost to fishermen who had paid for gear, gas and the other necessities essential to working in the industry. Their catches also didn’t prove profitable if purchase prices were low. The FFMA brought regulation and security so prices would be transparent and fair.

This is important to the commercial freshwater fishery in Western Canada. “The western region produces far more fish than can be consumed in Canada,” says Interim President at Freshwater, John Wood.

As a marketing body, the corporation buys, markets and processes freshwater catches at its 110,000-square-foot Winnipeg plant. The company headquarters employs fifty salaried and over 160 production workers, increasing to nearly 300 during the harvest seasons and has approximately 1,700 fishers spread across fifty communities and 160 lakes. Freshwater’s purchasing region has more than fifty delivery sites that grade all catches through contracted agencies. Most of these are independent businesses, but Freshwater owns a few.

John explains that originally under the FFMA, freshwater fish was purchased from northwestern Ontario, the three prairie provinces – Manitoba, Saskatchewan, Alberta – and the Northwest Territories. He indicates that the company still buys fish from all but Alberta although Ontario and Saskatchewan left the Act a few years ago.

Freshwater has food brokers and distributors throughout the United States and Europe. It delivers a variety of products, both fresh and frozen, that include lake whitefish, walleye, northern pike, mullet and lake trout.

About sixty percent of product volume goes to the United States. “The U.S. is our largest export customer,” says John. The U.S. Midwest purchases a lot of pickerel and, “New York is a kosher market, and they buy a lot of lake whitefish, mullet and northern pike.”

Canadian markets take about fifteen per cent of the Company’s sales from all fish species. Other significant export countries include France, Finland, Sweden, Iran, China and Germany. “We’re shipping to more than fifteen countries.”

Freshwater constantly strives to bring new products to the market such as its caviar. “It’s been a traditional market. We’ve done it for decades,” explains John. “But we’ve certainly been putting effort into developing that market.” Until a few years ago, the company produced entirely lake whitefish caviar, but with its new product development strategy, it has been developing northern pike and tullibee roe into a caviar style products as well. “That has really taken off, and we’re selling a lot of that product now.”

With diverse fish species in its products, John says Frehswater likes to consider itself, “a one-stop shop for lake fish … we have the broad product range.” Since it receives fish from numerous lakes across a broad geography, “we have product available year round. That allows us to offer freshly caught fish pretty much every month Two thirds of the business is frozen product which ensures fish is available when customers need it.”

In Manitoba, the three largest lakes – Lake Winnipeg, Lake Manitoba and Lake Winnipegosis – are excellent sources of fish. Lake Winnipeg is, “hugely productive. That’s probably half of our business,” he adds. He also says that there are other productive lakes such as Great Slave Lake in the Northwest Territories, and those in northern Saskatchewan are also productive.

In 2014, Manitoba’s Lake Waterhen, renowned for its substantial resource of commercial catches of walleye and northern pike, became the first freshwater fishery in North America certified for sustainability by the Marine Stewardship Council, a global non-profit organization. The only other certified lake in the world is Lake Hjalmaren in Sweden.

“It’s a big step forward to have a lake certified as sustainable in Canada. It demonstrates it’s possible to do, and it also demonstrated that certain issues have to be sorted out before any lake fishery can go forward with certification.” He notes that one of the big issues is the certification of marine fisheries as opposed to lake fisheries. “The economics are totally different in a huge marine fishery.”

He affirms that customers are seeking eco-certification of fish products. “The way the markets are moving, more customers all the time are looking for certification. The retail sector is well ahead of the food service sector in requiring it.”

The certification at Lake Waterhen involved a number of partnerships in a collaborative approach to realizing a common goal. Fishers on Lake Waterhen had to involve Freshwater because, “we have to assure chain of custody of that product right through to the customer,” John says. “There are certainly partnerships involved. Everybody has to work together.” However, some of the most important partnerships for Freshwater are those that, “allow us to maintain and expand our markets.”

Other partnerships are those with other fish processing plants that engage in filleting work, breading and battering. The company has a contract packing partner in China that debones and portions some of its northern pike for European markets. “This has to be processed in China simply because it has to be done entirely by hand which is just unaffordable in this country.”

Not to be neglected is the crucial partnerships formed with the fishers themselves who begin the process by dressing fish at one of the many lake stations. Over fifty contracted agents then purchase the fish and place it into an ice water slurry which is then shipped to the Winnipeg plant. The plant then processes four main varieties of fish products which include whole, fillets, minced and caviar.

As for quality assurance, that really starts with the fishers themselves. They know quality fish when they see it. They also know that Freshwater, “will only buy Grade A fish. We won’t buy anything below that.” The agents too have a role in maintaining quality control by inspecting all fish before purchasing. “When the fish arrives here at the plant, there’s another quality inspection station which samples the fish as it’s coming off the trucks and make sure it meets our quality requirements.”

At the plant, in the past ten years, there has been significant investment made into upgrades of the forty-five year old facility. “We replaced a lot of core equipment to make sure it meets modern food processing standards,” confirms John. “That allows us to improve our efficiencies. We have redesigned the flow of product through the plant to make it considerably more efficient.” Even though the plant is old, it is, “equal to pretty much any fish processing establishment in Canada. We’re proud of that.”

One thing that needs to be emphasized is that the freshwater commercial fishery differs from commercial marine fisheries where plants are located oceanside for boats to unload their catch. “This is a very big logistical operation. If there’s anything that we do well, it’s handling the logistics of fish coming in from more than 160 lakes [and] fifty different agents, all coming into the plant at different times of the year,” stresses John. Because the company draws from such an expansive region, many of the origins are remote, so purchases from other lakes are made when some are seasonally closed. “There’s always fresh fish coming in here.”

As for the fishers themselves, at least seventy percent are indigenous, so the industry is essential to them. For many of these isolated communities, the freshwater fishery is the most significant source of commercial revenue in the community. Because Freshwater has been operating for decades within these communities, it is seen as a reliable source of income – fishers always get paid. “We’re there; we buy the fish; we understand the fishery; we understand the logistics of getting it out of the communities,” adds John.