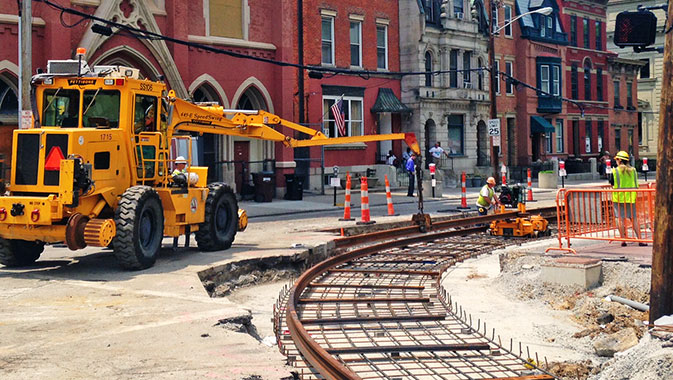 Delta Railroad Construction hails from Ashtabula, Ohio and has been family-run for four generations. This industry is as old school as it gets. That means it is tough to find the right people for the strenuous work that we just don’t seem accustomed to anymore, according to Vice President Rick Ryel. We also spoke with President Larry Laurello about a big job just completed in Toronto, which was its first bit of international work.
~
Cosmo Anthony Laurello started Delta Railroad Construction in 1957. The Italian immigrant came to the U.S. at the age of thirteen and ended up getting a job on the New York City Railroad. At one point, he and a buddy had a side job of fixing industry track.

“A railroad has a certain property line, and once the track goes beyond the property line, they don’t repair or fix it anymore. It’s up to the private industry to tend to their own track, so they did a side job to repair industry track, and that was the birth of the company,” says Larry.

Cosmo’s partner was eventually bought out, and his two children joined the fold in 1965 as second-generation workers. Larry Laurello Senior – Larry’s dad – went to Notre Dame, attained a civil engineering degree and joined the business along with his wife, Ida.

“We actually started working when we were twelve years old around the yards but didn’t start full time until graduating high school in 1977,” says Rick.

This was followed by the third generation with five boys. Joanne (Ricks mother) had two and Larry had three. One of them left the business, and now they are left with four partners who own the company. A fourth generation is presently working within the company as it nears its sixtieth anniversary next year.

Rick and Larry jokingly tell me that they are contemplating taking a 1957 Chevy Pickup Truck and ‘tricking it out’ as a showpiece. At the very least they will be producing some sixtieth-anniversary hats, shirts and calendars to go along with some advertisements in magazines. “If you put the car in the article, we may be forced to do it,” they both laugh.

The bulk of the company’s work is on either transit or commuter rail which takes Delta all over the country. The focus is more in the east because there is more transit infrastructure there, but it has just finished some work in Los Angeles on Phase 2 of the Expo Line that will extend light rail service to Santa Monica.

“We’ve done work in places as far as Houston, Texas and throughout the South in big cities like Memphis, Charlotte and Atlanta with their transit authorities. We also just finished our first international project in Toronto, Canada for the Spadina line,” says Larry.

The Spadina line runs under York University and amounted to ten kilometres of floating slab track. This was a joint venture with Herzog Contracting of Missouri. The Herzog/Delta group was able to perform at a high level to get the job completed, and the quality is phenomenal. “It is a beautiful piece of railroad track.”

National Railroad Contractors awarded Delta the Project of the Year for work on the Dulles Corridor Metrorail Project, Phase 1. Delta performed the work for Bechtel and installed the track from West Falls Church in Virginia halfway to the airport.

Delta is known for having excellent equipment, and it prides itself on having the right equipment to do the job efficiently and safely. To that end, it has an in-house shop to maintain it. “We probably have the most rail equipment in North America as a contractor. We also formed another company called Quality Track Equipment, with a shop that encompasses 50,000 square feet, and we remanufacture for our customers,” says Rick.

Delta has orders with the Canadian Pacific, CSX Transportation and a host of other Class 1 railroads and short lines to rebuild machines. In a sense, Delta recycles. It brings an old machine to the shop, tears apart the frame and updates it with the newest technology before returning it as a new machine. The recycling process saves a customer about thirty percent of the cost of new gear.

“This has raised the level of the quality of equipment that we have, that we work with ourselves and that we rent out to other people. That is the cornerstone of our business is the equipment and the ability to have the right stuff,” says Rick.

A major challenge for Delta is finding quality people for quality work. Larry thinks it has a lot to do with how society has changed and that working on the railroad is not easy. It is very physically challenging work, and he finds that the younger generation is geared towards computers, rather than getting their hands dirty.

“It’s not a skill set can be taught. It’s the physical labor and the pride of doing work that seems to be lost somewhat here in America. It’s also tough to find a qualified employee that can meet all the requirements whether it be past history or present problems.”

Delta is looking to hire a human resources person to help acquire more workers, but that does not solve the problem. One of the methods to deal with the issue is to try and stay as lean as possible — use the least amount of people, avoiding constant turnover and using the right equipment to minimize the number of people needed on site. The company is strategic in choosing jobs to ensure that it is not getting into projects that require many people to perform the work.

Presently, the market is a little tight – a common complaint in the industry. As far as the big jobs are concerned, whether they are funded or not, what Delta is discovering is that it is not that hard to find them. The issue is in getting on the team of a project that makes it all the way through to actually being built. There are many ideas being explored, and money is spent on engineering, but further in the bidding process, the project either disappears, has been voted out or has no funding.

“We are in a competitive bid situation. We do a lot of bidding and pricing of projects,” and the team is ultimately awarded less than ten percent of the projects it quotes.

Another of the many sides of Delta is a flash-butt welding operation. About ten years ago, it bought a welding truck. Its equipment manufacturing business took a used truck that needed a rebuild and got it running. Then Delta started welding and began offering it as a service. Now, three units are working.

There are only two companies in the U.S. that flash weld crane rail in steel mills and ports, and Delta is one of them. Larry claims it can be a scheduling nightmare, but is a nice piece of work nonetheless. So, it does flash-butt welding on crane rails and regular T-rail track.

“It’s just another division. Our company is basically in construction, but we are also a rental business – renting railroad equipment – we are a flash-butt welding business and a remanufacturing of equipment business. There are four different legs of the company. In order to survive in this business, we need to wear many hats,” says Larry.

The company takes on some enormous projects and currently is bidding the Purple Line in Maryland, just outside of Washington, DC. The brand new light rail line will go across the top of Washington linking the other lines of the Washington Metro across the Maryland suburbs in a $2 billion project.

Lately, Delta has been taking part in many projects as its reputation means that general contractors want it to be on the team. A few years back, getting the exposure was more difficult, and there were more players as many rail companies were looking to self-perform rail work.

“What we do is specialized. What it comes down to is that you have to know how to build railroad track. The cycle is starting to come back towards the specialty guy, and that is what the general contractors are looking for.”