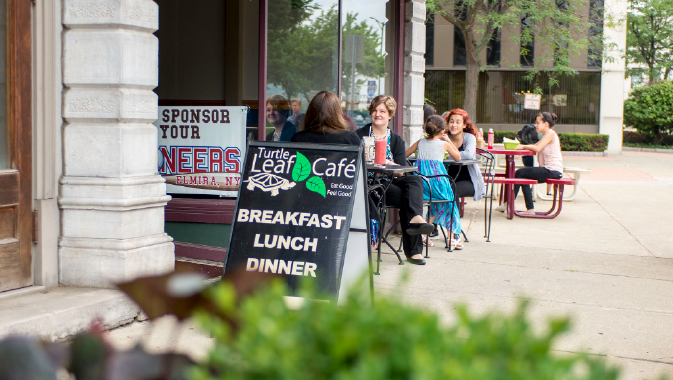 Chemung County, New York is in the midst of an exciting, multipronged revitalization effort. Located in the middle of the state’s Southern Tier region, the county and its surrounding communities have won several development awards in recent years that will fund a series of promising projects.
~
New York’s Southern Tier is located along Pennsylvania’s northern border. The region enjoys a mix of scenic beauty and industry and is well positioned along I-86, an important corridor for both business and recreation. Chemung County boasts a relatively high level of commercial development and has become a shopping destination for residents of rural Pennsylvania. The county is also well placed for tourism. “We are within short driving distance from the Finger Lakes and the vineyards,” says Mike Krusen, President of Southern Tier Economic Growth (STEG). “And we have an airport that really has become the gateway to the region.” One of three airports in the Southern Tier, Elmira Corning Regional Airport receives half of all the air traffic within that region.

Unlike much of rural America, the community has managed to retain its manufacturing industry. “We still have a very strong manufacturing base – long-term companies that have been here hundreds of years. But we’ve also got some new additions.” Major players with local operations include glass producer Corning Incorporated and Synthes, a Johnson & Johnson company. The county is also a regional healthcare provider and its hospital provides over 2,000 jobs.

In addition, Chemung County boasts a low cost of living. “There is a great quality of life and it is an affordable quality of life – that is one of the things that people are struck by when they come here. The housing prices and recreational activities tend to come at a much cheaper price than they do elsewhere,” Mr. Krusen says.

“We have a good balance of that upstate rural, natural beauty along with opportunities,” he summarizes. “At the end of the day we think it is a great place to raise your family and pursue your professional goals as well.”

With so much to offer, it is no surprise that Chemung County and the surrounding region have earned several major revitalization grants. The most significant award is from the New York Upstate Revitalization Initiative (URI), which was designed to give the communities of upstate New York an opportunity to address the economic challenges of their regions and work together to bring jobs back.

The Southern Tier won the contest by demonstrating its many assets and great potential. “Chemung County really defined two opportunity areas. One is the I-86 innovation corridor.” Around 18 miles long, this corridor is home to many thriving manufacturing businesses and distribution operations, including distribution centers for CVS and FedEx. Elmira Corning Regional Airport is also located along this busy thoroughfare.

Elmira, the county seat of Chemung County, is the second opportunity area. The city of 29,000 residents boasts strong banking and manufacturing sectors as well as higher education. Currently educating around 1,100 students, Elmira College is in the midst of an exciting expansion, as Lake Erie College of Osteopathic Medicine (LECOM) has selected the small liberal arts college as the site of one of its medical schools.

Once the necessary certification process is completed, Elmira College will welcome 350 medical students to study on the campus, which will benefit the entire community. “It would be a very exciting marriage between the medical school and our regional hospitals in terms of embedding doctors into their system,” Mr. Krusen remarks. “It is difficult in upstate New York, in rural areas like Chemung County and the Southern Tier in general, to recruit and retain doctors. About a third of all the LECOM students end up staying in the region in which they go to school, so you can see that would be a very important feeder system to our medical [sector].”

Elmira also offers several entertainment options that draw people from the surrounding region. As the area’s premier performing arts center, the Clemens Center draws around 180,000 visitors a year. “Generally we get four to five Broadway shows a year.” Home to a professional hockey team, First Arena is a 3,784-seat multi-purpose facility with two ice rinks, a bar, arcade, 31 luxury suites, and meeting rooms. The facility attracts roughly 150,000 people a year.

“When you put all that together, we have a good start,” Mr. Krusen points out. “But we’ve got challenges. There are a lot of vacant buildings. There are a lot of empty storefronts so we are going to try to generate some good, downtown market rate living options.” The plan to revitalize Elmira using state funds to leverage private investment has been dubbed Elmira Refresh. The initiative will breathe new life into the downtown by repurposing abandoned buildings, making the area more visually appealing, and making the downtown more interconnected and walkable. “We have some real opportunities.” There is already a $14 million mixed use development project underway that will add 15,000 square feet of commercial space and 54 market rate apartments to Elmira’s downtown.

In addition to the funding secured through URI, The City of Elmira won money from New York State’s Downtown Revitalization Initiative (DRI) to fund the county seat’s makeover. “Each of the ten regional councils got to select one downtown that would receive $10 million dollars,” Mr. Krusen explains. “Elmira was selected as that downtown. That $10 million is being invested in the Elmira Refresh plan that we put together.”

Chemung County’s airport has also been given a substantial grant. The Elmira Corning Regional Airport was just awarded $40 million in state funds and an additional $18 million in federal funds for a complete terminal renovation. “[We will] rehabilitate our airport terminal to make it an airport of tomorrow,” Mr. Krusen shares. “We have quite a design that the architects have come up with for that facility.” The renovation will help secure the airport’s reputation as the Gateway to the Southern Tier and the Finger Lakes.

The Southern Tier—and Upstate New York as a whole—have all too often been left out of the state’s economic growth and prosperity. For example, “120,000 jobs were created in New York State from August 2015 through August 2016,” Mr. Krusen reports. “Ninety-four percent of them were created in New York City. Upstate New York continues to be challenged. Chemung County continues to have its challenges.”

But, with millions in grant money ready to be put to good use, Chemung County and the rest of the Southern Tier are on a positive path. “There are a lot of different sources of funding, a lot of different opportunities, and we are positioning ourselves to take full advantage of those opportunities and to confront our challenges,” Mr. Krusen summarizes. “We are utilizing the resources being brought to us and [making our community] a better place to do business and a good place to raise a family.”