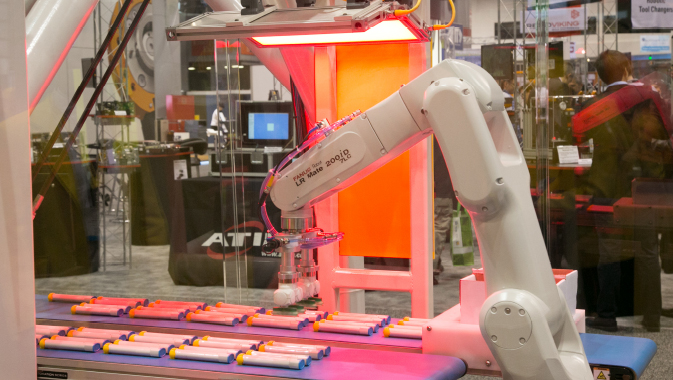 The Association for Advancing Automation (A3) is a leading global advocate for advancing the entire ecosystem of automation technologies and services. A3 serves as an umbrella organization for the Robotic Industries Association (RIA), the AIA – Advancing Vision + Imaging and the Motion Control and Motor Association (MCMA).
~
A3 membership encompasses automation manufacturers, component suppliers, system integrators, end users, research groups and consulting firms. A3 plays a supportive role as robotics and advanced automation continues to penetrate industries across the spectrum, from healthcare to hospitality, transportation to manufacturing.

“A3 is an umbrella organization; we think of it as answering why companies should automate their operations. Whereas the RIA, AIA and MCMA all help answer the question of ’how’ to leverage automation. These organizations help the end user implement and integrate robotics, vision, imaging, motion control and motors into their operations,” described Bob Doyle, A3’s director of communications.

“Now we have over 1000 member companies from across the U.S., North America and the world,” explained Doyle, who noted that A3 Mexico was recently established to leverage the significant growth in robotics and advanced automation south of the border.

The role of A3 is simple: advocate through education, trade shows, conferences, and networking events, conduct industry research and analysis, and develop consensus standards and certification programs to support and sustain the growth being experienced in the industry.

From 2010 to 2016, the robotics industry reached new heights in the U.S., as 136,748 robots were shipped to U.S. customers. Over the same period, manufacturing employment numbers increased by 894,000 jobs, halving the national unemployment rate from 9.8 percent to 4.7 percent.

“Since 2011, there’s been double digit growth in the non-automotive industries that we analyze. The automotive industry, which has historically been very strong for robotics, has grown substantially also,” Doyle noted. “Growth is being seen in every industry across the board from food and consumer goods to semiconductors, electronics, plastics and rubber, life sciences. The ability for robots to do tasks, very intricate tasks, that they were not able to do before has led to this growth,” he said.

“We also have a certified integrator program where integrators can get certified to a baseline of a standard,” he added.

“We do similar things on the vision side for AIA and also on the motion side with MCMA. Our individual certification programs, which help raise the bar and skillsets of the workforce, are gaining a lot of traction,” said Alex Shikany, director of market analysis at A3, of AIA’s Certified Vision Professional (CVP) and MCMA’s Certified Motion Control Professional (CMCP) training.

There is a direct correlation between number of robots utilized and higher productivity, improved safety and quality, and increased competiveness in the global market. Conversely, when robot sales are down, so too are employment growth rates, which in turn increases unemployment figures and economic disparity.

Contrary to popular belief, robots are not stealing jobs; they are creating new, better paying ones. A3 works tirelessly to educate companies and individuals on the benefits and collaborative potential of robotics and advanced automation, in an effort to put negative perceptions to rest and ensure the benefits of the technology are being delivered. A3’s Why I Automate video seminars are a great resource that helps to inform companies about the various tools available in the world of advanced automation and robotics to improve competitiveness, performance and output and open up new market opportunities in the process.

“Automation helps businesses create higher quality products faster, bring them into potentially new markets and provides better, safer jobs that are less dull, dangerous, and dirty,” addressed Doyle of the potential of automation and innovation. “Automation and robotics technologies are more capable today and more affordable, so companies of all sizes are able to justify the investment because they’ll get the ROI they need – as long as companies can find qualified people to sustain the growth this investment will spur.”

The current trends in the advanced automation and robotics world prove how far the technology has come. Some of the biggest trends remain collaborative and mobile robots.

“The market for collaborative robots certainly continues to grow as well as more mobile and autonomous robots,” indicated Doyle. “New companies are entering the marketplace, especially companies using these mobile robots in warehousing as well as on the manufacturing floor.”

Shikany added, “In machine vision and imaging, we’re seeing a lot of interesting trends as well. One of those is three-dimensional (3D) imaging, which is being used more in applications both inside and outside of factories.”

One of the best places to gain an inside look at many of these trends is at A3’s biennial Automate trade show and conference. Automate 2017 is North America’s largest showcase of automation industry trends, leading-edge technology and innovation, and took place April 3rd through 6th in Chicago. Over 400 exhibitors were present, including leading manufacturers and system integrators who were showcasing advancements in robotics, machine vision, imaging, metrology, software, safety, motion control, and motors to over 20,000 attendees from all 50 states and over 70 countries from around the world.

Automate 2017 was a smashing success, having increased in size by 40 percent from 2015. For the first time ever, a total of 13 Chinese companies exhibited on the showroom floor and A3, with its Chinese counterpart, China Robot Industry Alliance (CRIA), held the first ever U.S.-China Robotics Forum.

“We really gear Automate to smaller and medium-sized companies that haven’t automated before, so they come to Automate, meet these vendors and see how they can transform their business,” explained Doyle, who noted that there are upwards of 280,000 small and medium-sized manufacturers in the U.S. that could stand to benefit greatly from advanced automation.

Automate 2017 included training seminars, keynote speakers, and a start-up competition where eight finalists vied for a $10,000 prize sponsored by GE. “We were thrilled with this year’s show in terms of both attendance and exhibition. We had close to 1,000 people at our world of automation networking party on April 4th, which was a fantastic highlight of the week,” said Shikany.

“All this interest and enthusiasm is what is ultimately going to contribute to our culture accepting this as a good thing. By embracing innovation in automation instead of running from it, we can maximize its value to our society,” said Shikany of A3’s efforts to overcome persistent negative perceptions.

A3 kicked off Automate 2017 by releasing a white paper entitled Work in the Automation Age: Sustainable Careers Today and into the Future, which addresses the impact of automation and the types of jobs that are going unfilled as the job market evolves.

The goal of the white paper was to take a look at the jobs that are being created by advanced automation, identifying what needs to be done to support and sustain the careers that have evolved as technology advances and as robots and advanced automation are increasingly integrated.

“It’s not like we’re going to stop innovating. We’ve been innovating since the dawn of the industrial revolution so let’s make sure there’s education in place to help fill these jobs of the future,” addressed Doyle.

The reality is that two million manufacturing jobs will go unfilled in the next decade. Studies show that occupations with ten percent new job titles are likely to grow five percent faster, which means robots are giving rise to new, sustainable careers in practically every industry across the world but there is a lack of skilled labor to fill these positions.

A3 endeavors to evaluate the types of jobs that are going unfilled and what can be done to address this shortage. A3 supports and advocates for workforce development initiatives such as innovative training and apprenticeship opportunities, and programs like the robotics and advanced manufacturing training offered by RAMTEC in Ohio.

As the leading global advocates for advanced automation and robotics, A3 and its many partners around the world continue to take every opportunity to educate, inform and bring together the industry to leverage the many benefits of automation to support optimal economic performance, output, safety and quality.

Now that Automate 2017 is behind it, A3 has other exciting events to look forward to such as RIA National Robot Safety Conference, October 10 to 12, 2017 in Pittsburgh; MCMA Technical Conference (TechCon), October 16 to 18, 2017 in Minneapolis; Collaborative Robots & Advanced Vision Conference, November 15 and 16, 2017, in San Jose, CA and The Vision Show and conference, hosted by AIA, April 10 to 12, 2018 in Boston.

“We continue to tell the positive story about automation,” expressed Doyle, who, with the team at A3 continues to “travel to all corners of the world to have the opportunity to participate in, as well as influence the automation industry worldwide.”