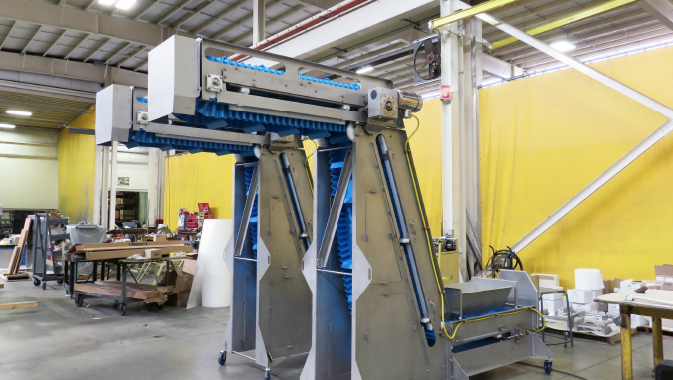 CHL Systems of Souderton, Pennsylvania has, for much of the past sixty years, catered to the food and general manufacturing industries. Today, it manufactures process automation equipment and provides services to industries that include snack foods and confectionery, food processing and packaging, meat handling and packaging, pharmaceuticals, steel, energy, and manufacturing. We spoke with Chief Operating Officer Mike Giagnacova, Sales Manager Andy MacBride and Marketing Associate Jeff Bowman.
~
Sixty years is quite the milestone. Founded in 1957 by Clayton H. Landis, as an equipment repair and installation firm in eastern Pennsylvania, CHL Systems experienced steady growth by building long term customer relationships with an emphasis on providing consistent value.

Clayton began the company by doing welding and light service repairs for local farmers. In this Pennsylvania community, there are many industries in meat packing, and it is a close-knit community.

“As those companies continued to get bigger and bigger, so did our company. Over the years, it transformed from a welding truck/farm repair shop into more fabrication,” says Jeff. The company has always liked taking on all kinds of challenges. In the 1990s, CHL built one of the bicycle tracks for the Olympics in Atlanta, showing its diverse abilities.

The company’s focus shifted quite dramatically as computers advanced. In the early nineties, computers were integrated into machines, and not personal computer (PC) based. The technology progressively increased what could be achieved with computers.

CHL continued to expand into new areas and transitioned to the design and fabrication of custom process automation equipment and services for production facilities. Advances in technology offered new and innovative applications to increase efficiencies for their expanding customer base.

“Going from an analog control to digital control really started to open up very much like your car. Years ago, the car was not really sophisticated. Now, hard drives in the computer control all sorts of things. In our world, as technology continued to progress, there was more ability to improve and become more efficient,” says Mike.

CHL Systems works with some sophisticated machinery. Adding more computer controlled logic to manufacturing has made the process a lot smarter. A camera can now look into a container and see how many bottles are inside.

“In today’s environment, with the advent of technology, you are able to automate more and use robots that are vision guided to either pick up something or place something at another location,” says Mike.

The companies with which CHL Systems worked with became more structured and had more products and processes, so CHL also needed to enhance its engineering staff to be a stronger company and be able to build equipment.

There is a bit of a misconception in this industry relating to automation. The belief is that automation is taking away jobs, but it is actually doing the opposite. In a very manual process, an unskilled workforce was needed, and efficiency levels were low. After adding levels of automation, manufacturing production increases. This does not necessarily mean that any positions have been cut out.

“What you’re really doing is producing higher skill level jobs, which earn more money and are more sustainable. These jobs have a lot more value attached to them, and people will stay in that career path for a lot longer than say a laborer who may keep a job for two years before moving on,” says Andy.

Robots are a very small part of the process. Robots have a certain allure as they are flashy and interesting to watch. But, when companies get into the technical portion of what they are doing, it has more to do with reacting to input.

“You don’t necessarily have to have a robot to do that. You need some logic that will take your data, make a decision, process it and then have some action,” says Andy.

Jeff says that CHL likes to put itself in its customer’s shoes. The majority of its customers have been with the company for a very long time. These customers come to depend on the services that CHL provides. When a client comes with a problem, someone will come to the facility and dig in to uncover the issue.

“When they connect with us, and we work together, there is a commitment that they feel and know. There is just a huge comfort level,” says Jeff.

CHL separates itself from the competition in many ways. When packing product, for example, the customer may deal with one company to just do the end-of-the-line packing. Then they need to deal with another to provide some intelligent conveyors to be in front of that packing line. Another vendor may be required to install all of the machinery.

“One of our competitive advantages is that we can provide that whole system for you, and it’s done in-house. The company has grown over the years where we have the capability; we have manufacturing, service, installation, and in-house engineering. When you come to us, it’s a good synergy, because we work for each other,” says Jeff.

Being a manufacturer is another way that CHL puts itself in its customer’s shoes since most of its clients are also manufacturers. CHL understands the ins and outs of manufacturing, and many of the same problems exist from one manufacturer to another, across all industries.

Strong relations with clients are part of the business. As CHL moves into the future, it plans to show the same level of commitment to its long-term customers, as it does with potential new customers outside of the current geographic area.

“There is an obvious comfort zone in staying within the Mid-Atlantic region, but we can provide that service throughout a larger territory, including the New England area, and hopefully show value to these other companies. We strive to bring that same value to other people in similar industries,” says Mike.

CHL has served many markets over sixty years and can provide varied solutions for its clients. The main focus for CHL in the future is going to be in continuing to provide process and automation as the automation, and design-build world is what supports the company best.

Being in a specialized industry can make finding the right people a difficult task. Quite a few employees have come to the company from referrals, and many that work here are family members, as it is, after all, a family-run company.

“I know a lot of companies frown on that, but we have a tight knit group. The average length of employment here is about twenty years. There are guys that started here sweeping the floor or cutting grass. Now they are account managers. We still do that today,” says Mike.

CHL aggressively goes after engineering interns, so that when they graduate, the company will have the cream of the crop. It is very intentional, and it is working. CHL has partnered with some of the vocational and technical schools in the area to hire top students there as well.

Every year, CHL has a company picnic, and this year’s event will be expanded for the anniversary. All of the families will be involved for a broader group get together. CHL is also giving gifts quarterly, as a token of appreciation and to encourage future work.

“A press release is going out to announce our sixtieth anniversary, and we are promoting it through our website, along with e-mail campaigns. This way our current customer base will be made aware, along with any prospective clients,” says Andy.

What is most impressive about going from humble beginnings to sixty years in the business is that CHL has developed into a high technology company, a leap that is not made easily. The owners deserve credit for steering the business through difficult times, such as the recession of 2008 which was a rough year for manufacturing.

“Now, we need to focus on where we can really make the biggest impact for our customers. We will continue to produce design equipment for them and provide the right automation solutions. It’s a really good direction for us,” says Mike.