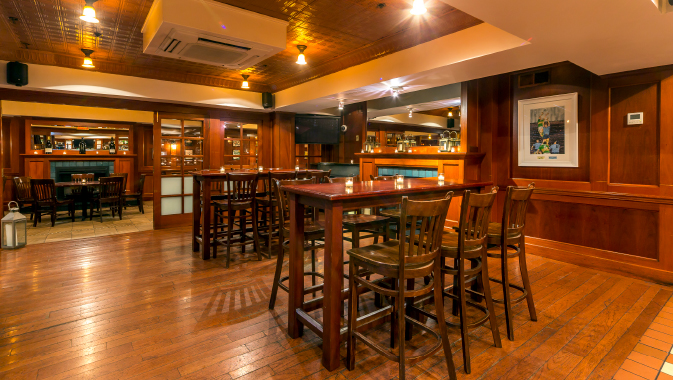 Forty five years ago, near Wall St., Mike Carty opened the first Rosie O’Grady’s restaurant with his business partner Austin Delaney. It moved to a second location three years later, in 1975, also in the Wall Street area in Manhattan. In 1977, the third Rosie O’Grady’s opened in Midtown Manhattan, and since 1981, it has been in its current location, 800 Seventh Ave., in the Broadway Theater District of Midtown Manhattan.
~
Mike’s business partner Austin passed away eight years ago, and he has taken over as the owner along with his wife Caroline, as well as their son, Michael Jr., and daughter Carolyn. A typical day at the office can last up to ten hours for Mike, and when he is out of town, there is always a member of the family present at the restaurant.

The bottom floor of the restaurant is a pub, which attracts a younger crowd and is popular among the people who work in the area. The main floor is Rosie O’Grady’s steak and seafood restaurant with a smaller bar. On the top floor, is the Manhattan Club, a gorgeous private catering facility. Many corporate events and private functions are held there, and customized menus are also available including the option for a sit-down meal or buffet. Rosie O’Grady’s as a whole grossed about fifteen million dollars this year.

Rosie O’Grady’s provides mostly full-time employment for about one hundred people. There are employees from the United States, China, Malaysia, the Philippines, Sudan, Puerto Rico, the Dominican Republic, Ecuador, Mexico, Ireland, Poland, Russia and Albania. General Manager Frank Rego is from Spain, and the Executive Chef Hamdi Elkadi is from Egypt. It has become a diverse and interesting group.

Mike is also a part owner of another thriving restaurant in Times Square called the Glass House Tavern. It opened in 2009 and has a different vibe, “with an Italian-American chef who brings those influences to the American café. It has been very successful.” explains Mike.

Chef Craig Cupani became an executive chef at a young age and has since brought his creativity to the contemporary American cuisine at the Glass House Tavern. It is known for being a great pre-theatre spot, where the servers make sure that guests receive their meal in a timely manner so as to enjoy a relaxing a meal before the show. The Glass House Tavern also has private dining rooms to host events, which has been an important aspect of the business. It has held numerous private corporate dinners, birthday and anniversary dinners, cocktail receptions, Broadway opening night parties and even a small celebrity wedding.

One challenge for Rosie O’Grady’s has been finding good, reliable staff, training them and being able to keep them on for a long period of time. Most employees only work in the restaurant business for a short period of time and then move on, explains Mike. Years ago, people were happy to remain to be in the business for a long time, but it seems like it is now perceived as a transitory job until a higher position comes along. It is a bit more challenging now to keep staff after they have been fully trained.

Rosie O’Grady’s is located in a tourist area near Times Square, Central Park and many hotels, so it tries to give good value for fine dining. It does not want to be overpriced and keeps the price around the middle range. It has developed a reputation for affordable quality food, and carrying an excellent selection of drinks and cocktails. Exceptional service is another important principle for the business. Customers are a mix of tourists and people who work in the area, so it tries to please both crowds, which has been a large reason for its success.

The reasonable prices are also part of the success for the catering aspect of Rosie O’Grady’s because the hotels in the area have a much higher cost for catering to private parties. It caters to groups ranging from twenty to two hundred fifty people, and being able to host parties for a reasonable price in Midtown Manhattan has garnered a lot of business.

At Rosie O’Grady’s, an important goal is to purchase products and produce that are locally grown as often as possible. “We are also known for having very fresh fish. We receive a good delivery of fish every day and sell a lot of seafood.” The steaks are popular as well but the seafood is especially raved about. It is important for restaurants to purchase food locally when possible. Every dollar spent generates twice as much money for the local economy, and local produce is fresher and tastes better since it is usually sold within twenty-four hours.

The business is not looking to expand at the moment and is quite happy with the current situation. The cost to operate a business in New York City is much higher now than it used to be, and there are other difficulties as well, such as dealing with various regulatory agencies. The utilities and property taxes in New York City have become expensive, also.

Many businesses have found it difficult to keep up, but Rosie O’Grady’s is lucky to have been in its location for such a long time and has done well. In the last few years, it has become a difficult city in which to operate a business, according to Mike Carty. “Well, I’m in the business, and I love it, and I wouldn’t change it for anything else in the world, but it has changed over the years and become more difficult recently.”

New Year’s Eve is a huge event at Rosie O’Grady’s, and all three levels of the restaurant are usually completely sold out by September. An agreement was made with the community and the police to allow the customers to go out on the sidewalk to watch the iconic Times Square ball drop. Just before midnight, guests step out to the cordoned off sidewalk to experience the electrifying atmosphere of the crowd. There are few restaurants on 7th avenue that do this. At first, the police didn’t like people going out on the street but it has been worked out for the past eight or ten years.

It is always a private party on New Year’s Eve. Rosie O’Grady’s is not open to the public that night, but instead has a fixed price for five hours’ open bar with champagne, a five-course meal, three floors of music and dancing from 9 PM to 2 AM and a lot of party favors for everyone. It is a popular night for Rosie O’Grady’s and sells out rapidly. New Year’s Eve is also a busy night for the Glass House Tavern.

Business has increased by about ten percent every year. The annual growth is fortunate and necessary because of the rapidly rising costs of operating a business in New York City. For Mike and his family, running the restaurant is about more than just making money; it has become a unique, diverse culture in which to thrive, with plenty of excitement and energy.

A family-run business is successful because the family is already a natural team; decisions are made faster since there is a less-politicized process. The warm, comforting feeling of a family-run restaurant is a big factor in the high volume of return business that Rosie O’Grady’s receives.