Developing an Economic Climate for the Future 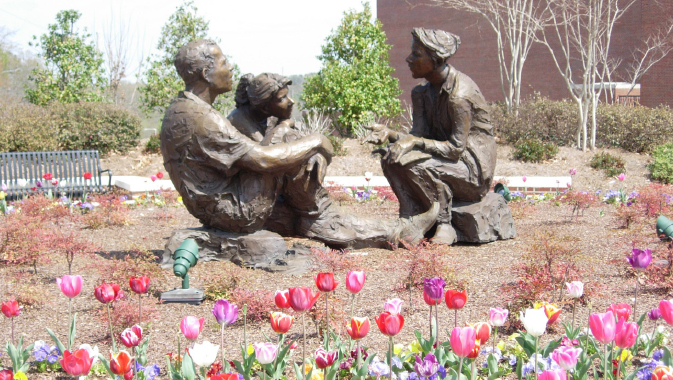 The Oxford-Lafayette County Economic Development Foundation is eschewing the traditional model of development for an innovative approach resulting in steady, sustainable growth from the inside out.
~
“The traditional model of economic development we think is fine for most communities, but we think our economic development is a bit more innovative,” said Jon Maynard, president and chief executive officer of the Oxford-Lafayette County Economic Development Foundation. The private-public partnership was formed in Oxford, Mississippi in 1992 with the mission to create opportunities for responsible economic investment and in so doing to raise the per capita income for all citizens of the county. And it has been doing just that ever since while marching to the beat of a different drummer.

“The traditional model of economic development focuses primarily on recruiting industry into their communities,” Maynard explained. “They find a large manufacturer to bring in, and the theory is that their suppliers and their networks will locate around them, and the economy will follow. We call this ‘whale hunting,’ and we feel that our approach is different from that. In Oxford, we call our economic development the “Tropical Fish” model. We have been recruiting people to our community for several decades, and the results are a sustainable economy and positive, steady growth.”

“First, you must create the right atmosphere so businesses, and people, can thrive. That’s really the role of economic development as we see it. Not all communities see it that way or function that way, but that’s the way we do it. We have a proven track record of success going back almost thirty years.”

One of the first things the foundation did right after its formation was to create a retiree attraction program that still flourishes 25 years later. “Other communities were saying, ‘let’s go out and land Toyota or Nissan or Goodyear and whatever other big manufacturer they could find,’ but Oxford said, ‘Let’s go out for retirees and attract human beings to our city instead of businesses, and see if that makes a difference.’ We created a retirement attraction program which is still going extremely strong, and we were featured on the cover of Kiplinger’s (a magazine which focuses on personal finance) in 2014 as the smartest place to retire.”

Retirees are drawn there by the mild climate which still features four distinct seasons. They also appreciate abundant recreational opportunities, including four golf courses, a dozen parks with hiking and walking trails and opportunities for every type of sport, including participatory and spectator ones. There is “everything except for snow skiing and scuba diving.”

The foundation’s thoughtful, deliberate plans to avoid a ‘boom and bust’ cycle has resulted in an average of about two percent population growth annually, with a total of 9,000 new jobs, 6,400 of them added since 2010. “It takes a while for economic development to catch up,” he said. “It’s like spinning a flywheel. You start slowly at first, and then suddenly it just keeps getting faster and faster, and that’s where we are now.”

The town is home to fine dining restaurants that are listed in the top hundred in the U.S., with several award-winning James Baird chefs serving food that drew CNN’s Anthony Bourdain to feature them in his Parts Unknown series.

There is also a vibrant artistic community which draws visual artists and writers. It is the town where best-selling author John Grisham lived for many years and on which Nobel-prize winning author William Faulkner based his fictional town of Jefferson and county of Yoknapatawpa. Faulkner died in 1962, and Grisham now lives in Virginia, but both of their homes were acquired by the University of Mississippi. Grisham’s home is now home to the University’s Author in Residence. William Faulkner’s home, Rowan Oak, is open to the public as a museum celebrating the life the Nobel Laureate.

Oxford’s carefully planned development goes all the way back to 1837 when the town fathers named it after the university town in England in hopes of a university being built there. Eleven years later, the University of Mississippi, which came to be known fondly by alumni as ‘Ole Miss,’ opened with eighty students. Today its enrollment stands at over 24,000, and it is included in the elite group of R-1: Doctoral Universities – Highest Research Activities by the Carnegie Classification. Among its fifteen academic divisions are a major medical school, nationally recognized schools of accountancy, law and pharmacy and the Sally McDonnell Barksdale Honors College, renowned for academic rigor, experiential learning and opportunity for community action.

“From the very first day it was founded, Oxford was intended to be a university town,” Maynard said, “and now the city and university are tied together with a strong identity for quality and charm. We want to make sure our economic development involves good planning and that everything we do includes the university and vice versa. Development here is not happenstance. It is well thought out by a collaborative group that includes stakeholders from all facets of our community.”

The development process includes a business incubation program which allowed, for example, the technology start-up FNC to grow to the point where CoreLogic, a California-based technology company decided to buy it for nearly half a billion dollars. Corelogic kept the FNC function and operations remain in Oxford. After one of the original founders was bought out, he went right back into the incubator where the first company started and is now creating another company which Maynard believes could be just as big if not bigger than FNC.

Next Gear Solutions, another technology company which started from scratch and came through the incubation program, “is now valued at a little over $100 million, and they have big growth plans,” he said. “They are happy here in Oxford, doing what they do. We expect that if they sell their company, they will turn around and create another business. If you want people to stay even after they’ve sold their business, you have to have the right atmosphere so they can thrive, and that’s really the role of economic development as we see it.”

Part of that role involves providing a workforce to meet business needs. A local group of entrepreneurs developed the Base Camp Coding Academy that takes students who have just graduated from high school and teaches them to write software codes. The first class has just graduated, and all of them have jobs in technology companies.

“Really the next wave of manufacturing is going to be software coding. It’s very small right now,” he said, “but the founders of the academy are going to take the DNA of that model and build it all over the state to teach coding. This teaches kids in Mississippi that you don’t have to work in a factory, if you can write software.”

The foundation also has a partnership with nearby Northwest Community College which was especially successful when Winchester wanted to come in to manufacture ammunition with large expectations for job growth. Winchester particularly needed people to perform the job of adjustor, the person who makes sure all the equipment is set where it needs to be set. Winchester and Northwest Community College set up a training program in the business incubator and Winchester had its pick of trained employees. Winchester now employs over 1,500, making them the largest private employer in the county.

Although it is in a rural area, surrounded by forests and fields, Oxford has excellent transportation links. It is close to river ports on the Mississippi, within twenty-five miles of Interstate Highways 22 and 55 and less than an hour from the Memphis International Airport. Memphis is one of the largest intermodal hubs in the U.S., and is home to Federal Express.

Brain drain has been a huge problem in Mississippi. “What drives us the most is that we want to make our economy develop around jobs that retain our best and brightest.” he said. “If we solely focused on bringing in large manufacturing industries as our base, we wouldn’t be able to keep university graduates. We work hard to assist businesses to create jobs here that focus on university graduates. These businesses are sometimes recruited into our area, but we especially focus on assisting startup businesses like FNC and Next Gear Solutions. These businesses can find expertise and talent in and around the University of Mississippi.”

“We think people will work where they want to live, and people really want to live here. We are growing exponentially, and Oxford-Lafayette County are doing things the right way.”