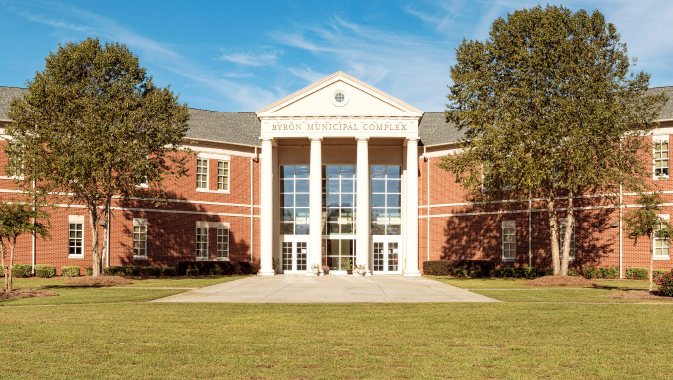 In the state famed for its peaches, within the Warner Robins Metropolitan Statistical Area of central Georgia, lies Peach County: an industry-focused rural community with a population of about 27,000 people.
~
As the county is emblematic of modern business savvy combined with old Southern charm, many roadside farmer’s markets are located just a few miles off Interstate 75, one of the U.S.’ major north-south routes. I-75 goes right through Peach County, running from the Canadian border to Miami, Florida. This makes the county a popular rest stop for snowbirds who may want to stock up their cars with a basket of peaches before indulging in those Florida oranges.

Lane Southern Orchards, a fifth-generation farm that also participates in the roadside market, draws in an additional 300,000 tourists annually who want to observe the peach packing process firsthand, have some peach ice cream, and—depending on the time of year—pick their own strawberries during the Spring Fling celebration or run through a seven-acre corn maze at the Farm Fall Festival.

Peach County’s slogan is “we grow industry sweeter.” Lane Southern Orchards is one of its many historic businesses, but due to lower taxes and competitive utility rates, along with a skilled workforce of 160,000 people within commuting distance, business opportunities are also ripe for the picking.

“Logistically, Peach County has a prime location because eight hours of transportation takes you right to the tip of Florida or up into Ohio. So people who are in distribution—and most businesses are to some degree because they have to move product—are easily situated to get their products where they need to be going,” says BJ Walker, Executive Director of the Development Authority of Peach County.

The county is three hours from the deep port of Savannah – the largest single container terminal in North America, with a maintained channel depth of 42 feet and immediate access to interstate highways I-75 and I-16, and an hour and a half from the Hartsfield-Jackson Atlanta International Airport, offering over one million flights annually from 200+ national and international gates, making its location not only convenient for tourism, but also a strategic place to set up a business.

Peaches and pecans are industry staples in the county’s agricultural sector, which has experienced recent growth from million- and billion-dollar companies from western states such as California buying land for agricultural investments. Moreover, there is ample opportunity for companies in the supply chain, as Peach County is one of four counties in Georgia that offers exemption from the newly created Freeport tax on inventory still in process, and also one of four to exempt taxes from ecommerce.

“The Freeport tax is a bad tax. To tax a product still in production doesn’t make sense to me. We’re at 100 percent exemption in Peach County. They also changed the law in Georgia to create a new class which deals with ecommerce, and Peach County exempts those taxes as well. Amazon, Walmart, or any company selling goods online won’t pay a tax in Peach County,” Walker explains.

To entrepreneurs looking to set up a film production business (a saturated market in the Los Angeles area), Peach County is worth giving a second look. Located on the other side of the country and facing another ocean, Georgia is second behind California in film production based on tax incentive structure.

“There are a lot of studios popping up, and some major investments. We have great tracts of land that can hold a million-square-foot studio,” says Walker.

In addition to Lane Southern Orchards, the Blue Bird Corporation is also a source of old county pride, celebrating its 90th anniversary this year. Headquartered in the county seat of Fort Valley, the company was founded in 1927 and remained family owned until the 1990s. As of 2015, it became a publicly held company and continues to grow. It is the number one school bus manufacturer in North America; its iconic blue bird logo can be seen on school buses nationwide.

With both an impressive history and a modern outlook, Blue Bird is currently looking to hire another 200 fulltime employees (including machinists, welders, diesel mechanics, and rivet drivers), and has recently received a $4.5 million-dollar grant to produce an electric bus.

“There have been some accidents lately on school buses, so HSM has developed an interchangeable latch system. It provides more safety measures, more comfort, and it’s efficient for getting more students on the buses,” Walker says.

The innovative company recently announced a multimillion-dollar, multiphase, multiyear expansion of its C.E. White facilities in Fort Valley, which will bring even more jobs to Peach County. The Development Authority of Peach County has been helpful to HSM Transportation Solutions and other businesses as they grow, search for employees, and conduct training.

“HSM needed some space, and I said, ‘sure, take over the boardroom and we’ll bring you some coffee and some Danishes. These little things that we provide from a small-town perspective are not to be overlooked,” adds Walker.

This exemplification of Southern hospitality is what makes doing business all the sweeter in Peach County. “When people are looking to locate and invest in a community, they’re not just choosing a site. They’re choosing a partner to get their project off the ground,” says Walker.

With lots of new projects under its belt, the Development Authority of Peach County succeeded in obtaining a grant to build the Workforce Development Center, which had its grand opening last year. It proved to be immediately beneficial, because Blue Bird had just gone public and was expanding.

The Peach County Workforce Development Center uses Georgia Quick Start, the state’s award-winning signature program for economic development. The Technical College System of Georgia provides Quick Start at no cost to employers, and its customized training regimen prepares employees with the skills needed to succeed. In all published surveys of site selection professionals in the U.S., Quick Start has consistently ranked number one for 14 years.

Peach County has ambitious plans for future development, with 432 acres under contract and a mixed-use industrial development currently underway that is over 1,000 acres. The well-planned development will have technology, retail, and residential sections right along I-75, with beautiful oak trees lining the streets, making it appealing to both professionals and families.

“It’s what people such as millennials are looking for, where you can go to work, then after work be able to go and get a beer, eat dinner, and go shopping within the same development. All of that together in a planned community is exciting,” says Walker.

Walker also wants to boost Peach County’s healthy tourism sector, which still contains untapped potential. Because Peach County has an abundance of rivers, there is room for tourism companies to capitalize on the county’s country charm and offer kayaking tours to nature aficionados. Walker also wants the county to continue to be a sought-after booking location for rustic barn weddings, and begin shuttle services to some of the farms that are currently tourist destinations. A popular activity among Peach County’s tourists is visiting a farm for a few days to live and work, experience the rustic lifestyle, and learn about farming on a holiday.

But Peach County provides more than fertile grounds to grow a business or plan a rural getaway; Walker notes that it is a great place to live, offering an alternative lifestyle to the bright lights of Atlanta or other urban centers. “That never did appeal to me. I don’t want to live in a condo. I live on four acres of land,” he says.

Aside from his time away at college, Walker has spent his entire life in Peach County. He is a lover of nature who enjoys the balance of having access both to the wilderness and the more populous metropolitan areas.

“This community always pulled me back,” he shares. “I like the fact that it’s a small enough community that you feel you know everybody. That’s changed a little bit—we are growing. But you go to the grocery store and you can see two or three people you know. It’s a close-knit community with enough resources and proximity to the interstate that you can do all the things that you want to do. It’s peaceful to me, and the big draw is the quality of life. You have all the things that bigger cities offer close by, but you still can live in an uncongested, rural community that other communities used to look like 30, 40, or 50 years ago.”