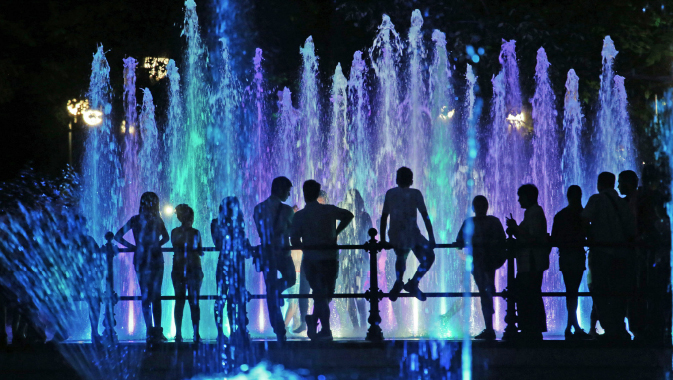 This year, Crystal Fountains will proudly celebrate its fiftieth year in operation, a milestone it has achieved by creating visionary, large-scale commercial water features for audiences around the globe. These spectacular water features have distinctively enhanced both public and private spaces, and have led to Crystal Fountains’ reputation as one of the world’s leading designers and manufacturers of high-end water features. Their portfolio is stocked with impressive projects, including the Crown Fountain in Chicago, Longwood Gardens in Pennsylvania, and even the revitalization of the fountains at the Château de Versailles.
~
Crystal Fountains was established by Roger L’Heureux in 1967, and made its debut at the Montreal Expo supporting artist Gerald Gladstone before the company was even incorporated. Over the decades, Crystal Fountains has grown significantly in both size and impact, thanks in great part to OCAD graduate Doug Duff, in whom Roger placed a great deal of trust and faith. Together, the pair managed to fashion their first few projects, including the enduring water feature in the Toronto Eaton Centre, and the rest, as they say, is history.

Skip ahead to 2017 and, three generations later, the company is still family owned and operated. “Doug and my father are the ones that really took a chance back then with really innovative fountains, particularly in Canada. Creative risk taking and failure in the development stage are encouraged. One foot firmly planted in the known and the solidly reliable, while the other foot is crossing the doorway into uncertainty,” noted current Crystal Fountains President, Paul L’Heureux, who said that the company maintains the same innovation driven philosophy today.

Roger’s sons, Dave and Paul, joined Crystal Fountains’ leadership team in the late 1980s and early 1990s. It is these two who have truly guided the company’s global expansion. Roger instilled in his sons the values that they would need to succeed, the most important of which being supporting client success with lasting quality projects, and they have since taken Crystal Fountains to heights previously unimagined. Dave and Paul got their feet wet, both literally and figuratively, in learning the family business by fixing fountains and learning how both water features and the industry operated.

When the L’Heureux brothers joined Crystal Fountains, North America was entering a recession that could have had severe implications on the profitability and future of the company. Thanks to the strong relationships it had forged in the industry with architects and developers who were finding success in Asia and the Middle East, though, the brothers overcame this challenge.

This set the international market stage for Crystal Fountains as a huge turning point for the company, paving the way for its evolution into an export manufacturer. Now, with offices in the Middle East and Europe as well, nearly eighty-five percent of Crystal’s sales are outside of Canada and the global team has since supported clients on numerous high scale international projects.

Among these, Crystal was involved in the performance feature at the centre of Cairo Festival City, and was also honoured to support artist Jaume Plensa in both his creation of the Crown Fountain in Millennium Park and in his brilliant design of World Voices in the Burj Khalifa. Crystal is consistently growing its team, assembling varied talented professionals such as mechanical and electrical engineers, technicians, technologists, artists, landscape architects and even website designers. All of its employees have become experts in water shaping, allowing the team to provide a successful, quality water feature to nearly any vision or space, from design to manufacture through to installation and maintenance support. As a testament to this versatility, they have even been involved in the inclusion of stunning water feature shows on world class cruise ships, hosting performances in the middle of the sea.

Crystal Fountains has fostered a family atmosphere, and this thriving corporate culture has been a driving force behind its growth and success. Paul L’Heureux provided a phrase which was passed down from his father: “Never break a creative person’s spirit.” The refrain has stuck and has been the catalyst for some of the company’s most impressive work.

Regardless of location, employees of Crystal Fountains are engaged, caring and pay incredible attention to detail, drawing on the company’s internal resources, such as its expansive testing facilities. “We are ISO 9001, but all the processes and procedures can’t substitute for commitment and experience,” stated L’Heureux. “People create; corporations do not. People care; corporations do not. Ours is a relationship business where many customers place their trust in us. It’s people who pull off successes.”

These very people help to foster a passion for innovation throughout Crystal Fountains’ operations. It continues to push into new areas of design and functionality and has developed new systems, software, and technology to craft its water feature designs. Take its newest lighting technology as an example. Crystal was entrusted to develop industry first RGBACL LED technology for the Main Fountain Garden revitalization at Longwood Gardens. In order to keep original creator Pierre Du Pont’s 1930s vision alive, the clients were looking for the most cutting-edge technology they could get their hands on with the product longevity required for such a high scale project. They wanted to stun their million+ annual visitors with a breathtaking show, but also felt responsible for preserving the historical significance of the area, while simultaneously sweeping the fountain into the 21st century. Crystal was able to provide LEDs with the capability to color match specific significant shades and tones, along with an infinite array of pantone colors to illuminate the dancing water and surrounding landscape.

Crystal’s VP of Global Business Development, Darcy L’Heureux, summarized the shared sentiment that the team feels after completing world-class projects such as this one. “Our success is directly tied to our client’s success. When they’re successful, we feel successful. We’re lucky to be a part of such monumental place making, and it’s always thrilling to reach our goal of supporting a water feature that will continue to impress onlookers, inspire creativity, and elevate our valued clients for years to come.”

“People take a view sometimes that fountains are wasteful even though the water is circulating,” L’Heureux noted. “We can take the fountains now and use air conditioning condensate water as a water replenishment, or we can take greywater from a building and condition it to make it fountain grade quality.”

Crystal Fountains has been recognized for its work as well as its commitment to excellence. Named the 2015 and 2016 Silver Award winner by Canadian Occupational Safety, it is considered one of the safest employers for young workers in Canada. “While it certainly takes a lot of hard work and dedication to stay ahead of the market with new products and quick production, we know that cutting corners when it comes to safety is never a sacrifice worth making. By investing in keeping our workers safe and happy, while allocating resources properly to get the results we want, we get the best of both worlds,” explained Plant Manager and Safety Coordinator Jonathan Owens.

Crystal Fountains offers so much more than water features; it offers pleasure. As Dr. Wallace J Nichols explains in his study Blue Mind , brain imagining indicates that proximity to water floods the brain with feel-good hormones such as dopamine and oxytocin. Levels of the stress hormone cortisol actually drop. Scientists have also discovered that the brain prefers the color blue above all others and water increases our ability to focus.

L’Heureux explains that this holistic consideration of the enjoyment and benefit of Crystal’s final projects is why they do what they do. “Water can give us energy, whether it’s hydraulic, hydration, the tonic effect of cold water splashed on the face, or the mental refreshment that comes from the sensation of witnessing both its power in movement and tranquility in stillness. Whether it’s the thrill and awe we experience while watching a fountain bring water to life to dance before our eyes, or the laughter and joy that comes from playing in its streams, Crystal is privileged to be further developing water’s historical role in human society.”

As the company celebrates the last fifty years and is poised for the next fifty, the next generation of L’Heureux is already an active part in the company and prepared to take full advantage of the untapped potential of the market. The future focus will remain on quality projects, client relationships and success, and a corporate culture that encourages its employees to be passionate about water feature design.

“We always have the desire to grow more, always seeking new relationships. Our marketing and business development team do a great job of that, but really, at the end of the day, no matter how well you market or sell, the strongest way of getting future sales is successful projects that you’ve been involved in the past, so you’ve got to do a fantastic job,” explained L’Heureux. And a fantastic job is something that Crystal Fountains demonstrates again and again.