Changing with the Times, Eighty Years On 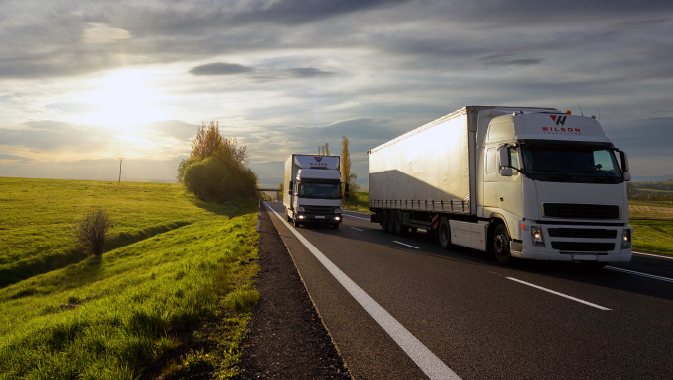 Wilson Truck Lines of Etobicoke, Ontario has a cherished history that began in 1937, making it one of the oldest trucking companies in Canada. It currently has two locations with 225 employees and is privately owned to this day. We spoke to Jim Wilson, the owner and chief executive officer and Marc Mousseau, President and C.O.O. about their competition, challenges and rebranding.
~
Wilson Truck Lines was founded by Jim’s grandfather John Wesley Wilson in 1937. The company began with a few trucks hauling fresh produce from the Holland Marsh area. The Wilson family had a farm and was trying to find ways to take produce to market. When the company acquired a few more trucks, additional goods were taken to different markets from other farmers in the area.

Carl Herbert Wilson took the company over in 1949, and during the war, it hauled aircraft material and equipment, doing its part in aiding the war effort. In 1950, the transportation of goods into Northern Ontario began seeing loads move over the road and all northern roads at that time were gravel.

Jim bought the company from his father Carl in 1981. At that time, grocery chains A&P and Dominion were the primary clients. In 1985, A&P bought Dominion and in 1989, A&P bought Miracle Food Mart and Ultra Food & Drug.

Deregulation hit Ontario in the eighties, opening the industry to more operators. “This provided us with a great opportunity for growth. Back before deregulation, everybody needed permits and licences for different areas. We had them all. At one point, A&P dealt with many companies, but once deregulation hit, we assumed all of that. They went from twenty-plus companies, down to one – us,” says Jim.

In 1999, Wilson signed its first official ten-year contract with A&P Canada and in 2005, A&P was bought out by Metro Inc. Successful negotiations in late 2009 secured a new ten-year agreement that took effect in 2010.

The entire company-based fleet will be replaced with new 2018 Volvo I-shift tractors in early October. The company will also be replacing its shunt tractor fleet with new equipment to accommodate all of the shunting work at all of Metro’s warehouses. A shunt tractor, or terminal tractor as it is also known, is a type of vehicle that moves semi-truck trailers around cargo yards at shipping facilities.

“We plan to be around for a long time and our priority is to continue working with Metro. We have a tremendous relationship and our partnership speaks volumes to our success,” says Marc Mousseau.

The company has competition. However, Jim and Marc believe that no one serves the food-directed market as well as Wilson’s.

“Cost is everything these days. People are always looking to do things bigger, better and cheaper, so it’s important for us to stay ahead of the game. We have state-of-the-art processes and systems. We don’t take that lightly and we recognize that the future is driven on systems and technology, so you can’t be resting on your laurels,” says Marc.

Wilson’s systems allow the company to share information with its customers. Communicating better electronically can eliminate errors and increase efficiencies. It also provides Wilson with the accurate information needed to get the loads out on time.

The company motto, “We never say no,” is very true for Wilson’s. It works hard to accommodate all of its customers’ expectations.

“As potential business comes our way, we look at everything. We are selective in making sure that what we do today, will not be hampered by what we could do tomorrow for a different customer. In other words, we will not jeopardize what we do on the dedicated side with Metro, to go get an account that could cause us to fail there. As much as we want to grow, we are aware that Metro is the main focus of our operation,” says Jim.

The company fleet is composed of company drivers and independent owner/operators who are hired by Wilson’s full-time. The company also deals with various third-party agencies and cartage companies. “This is to have the flexibility needed to properly service our accounts as their volumes fluctuate day to day. Wilson’s focus is to continue to perform at a level that sustains the existing relationship with Metro and any further growth they may have.”

Another goal is to provide a more health-conscious environment for its employees and drivers. Part of the eightieth-anniversary celebration includes lifestyle coaching. The company wants everyone to be aware of how important it is to be healthy.

“We also want to be environmentally friendly, like most other companies. This is another reason for the new equipment. It has up-to-date 2017 emission standards. As green as it gets!” says Marc.

The company recognizes employees and drivers annually with driver safety awards and accident-free recognition awards. “We have a million-mile club. Some drivers have over three million accident-free miles, so we have an event every year for that group, which grows every year,” says Jim.