A Stronger Voice through Education and Advocacy 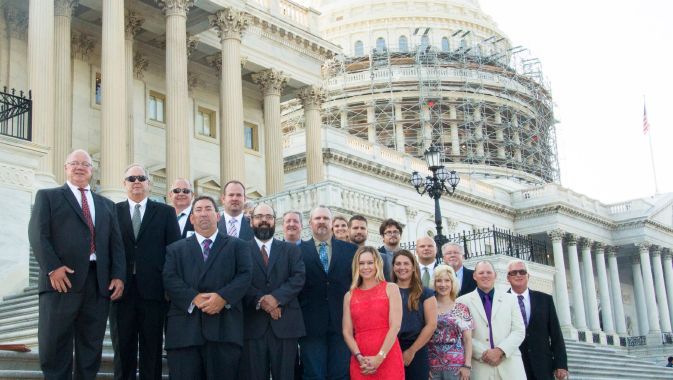 The National Association of Trailer Manufacturers (NATM) has proactively supported its members for thirty years from its headquarters in Topeka, Kansas. Its growing membership is a testament to its ability to engage, cooperate, inform and advocate.
~
“There is more power in unity than division” – Emanuel Cleaver, member of the U.S. House of Representatives.

A collective voice holds power to break the silence when striving for a cause that benefits many. Trade associations, specifically, use this collective voice to assist members in a myriad of ways – the transference of knowledge, building member reputations, providing a forum for networking and support and addressing current and future challenges.

“I would say that, over the years, we’ve been incredibly successful in advocating for the industry and also educating the industry,” affirms Kendra Ansley, NATM’s executive director.

The NATM began in 1987 with a group of four manufacturers simply seeking better insurance rates and was formerly known as the National Association of Livestock Trailer Manufacturers. In 1992, the association started using its current appellation and continues to grow in intent and purpose. Although the recession proved difficult for the industry, “we’ve bounced back in the last couple of years incredibly well,” adds Kendra. “Each year, we’ve been growing by about ten percent, especially in the last couple of years as we’ve really begun to get back to where we were before 2008.”

As an example of its advocacy work, the NATM worked diligently for seven years to get legislation passed for doubles towaway – or the tandem towing bill – to be included in the FAST (Fixing America’s Surface Transportation) Act, passed by Congress in 2015.

In 2000, a member company began working on doubles towaway legislation but required some advocacy assistance. “That’s when NATM took over and started actively seeking to get it included in the legislation,” states Kendra. The NATM met regularly with federal affairs representatives to discuss what the FAST Act meant to the association and its members and how to efficiently tow trailers in tandem from manufacturer to dealer.

The passing of the doubles towaway bill in 2015 allows combinations of trailers up to eighty-two feet long to be driven by Commercial Driver’s License holders. This was important to the NATM, because prior to federal legislation, there was, “a patchwork system of state laws,” explains Kendra. Some states would allow tandem delivery and some not. This meant that some manufacturers had to drive two trailers to a state border, deliver one and return for the other. This does not make sense economically in terms of hours spent driving, the increase in fuel consumption, the wear and tear on the vehicles involved, and environmentally, with unnecessary emissions generated.

“It was very important to our members to have one federal law allowing tandem delivery,” she continues. “That way, they could use their resources as best as possible – the most efficient way possible – and not have to worry about crossing state lines and how that will affect their ability to deliver their products.” This legislation was a “committed effort by the association and was an incredible resource savings for our members once that was passed.”

The NATM has a number of successful programs to address the concerns of its members. One such program is its compliance verification program which began as a voluntary program in 2002. NATM’s Compliance Consultants visit members’ facilities to ensure manufacturers have the processes in place to build trailers in compliance with federal motor vehicle safety standards and industry best practices.

Trailers are considered motor vehicles and, as such, trailer manufacturers must abide by the same regulations as automobile manufacturers, “unless we’re otherwise exempted,” explains Kendra. “Our members want to build trailers in compliance with federal regulations, but compiling those regulations is incredibly time-consuming.” She indicates that for members to understand, implement and monitor regulatory changes, “is pretty much impossible for the vast majority of our members,” noting that most members are small businesses.

Although voluntary initially, so many members had volunteered to participate in the compliance verification program that it became a mandatory requirement in 2012. “They must pass a compliance inspection every two years in order to maintain their membership,” says Kendra, adding that, “Our members are incredibly committed to following federal safety regulations and to improve the safety of our nation’s roadways.”

In addition, many NATM members provide plant tours as an opportunity for members of Congress to tour the facilities, meet employees and engage in discussion about the industry and its needs.

These visits give representatives a clearer picture, “of who we are and what we’re about,” explains Kendra, “and also the impact that manufacturing facility has in their constituent base … It’s been really a great opportunity for representatives to understand the industry as a whole [and] also the unique impact [facilities] have on their local communities and how important they are to the economy and supplying jobs. And also how important trailers are just to the general public.”

NATM’s government affairs program was established in 2008 and serves as a medium for discussion about such matters as federal laws and regulations that may have an impact on the industry. As NATM continued to grow, it realized that, “we would need a larger voice in government affairs matters,” says Kendra. It was then that NATM partnered with international law firm K & L Gates in Washington, D.C., for policy expertise. “What they’ve been able to do is help us better engage with our members’ representatives.”

Since trailers are considered motor vehicles under federal regulations, NATM members must abide by the same compliance regulations as other vehicles, but sometimes cannot. For example, a number of years ago a warning label was required on the passenger side B pillar of a car, something trailers don’t have. From this perspective, the government affairs program, “is about educating [representatives] so that when legislation comes up involving motor vehicles, they think about how it might impact the trailer industry. We can talk about possible exemptions when those regulations aren’t actually meant to be something that trailer manufacturers are supposed to follow.”

In 2010, NATM’s political action committee was initiated to provide support for representatives who have openly supported the trailer manufacturing industry and who, “… have made a concerted effort to educate their fellow representatives about who we are and why we’re different from the car or truck manufacturers,” says Kendra.

She also notes that the industry employs more than 400,000 and contributes more than 3.5 billion dollars to the economy, yet the trailer manufacturing industry is not fully recognized and is not considered often in legislation. “That’s what we’re trying to fix.”

In 2016, NATM implemented its new strategic plan (2016-2018) with some major changes, one of which is its approach to consumers. Kendra explains that although members are manufacturing trailers in accordance with federal safety regulations, consumers may be engaging in unsafe practices such as improperly hitching or loading the trailer.

“A big part of our strategic plan is a trailer safety week,” she says, noting that NATM’s first national safety week will be June 3 – 9, 2018. “Our goal is to reach out directly to consumers through a variety of mediums to help them better understand how to use their trailers properly.”

Also, the NATM will be addressing such topics as the newest vehicle innovations such as vehicle to vehicle (V2V) communication and autonomous vehicles. These innovations are, “very big in the auto industry,” affirms Kendra. “Nobody yet has considered how trailers might factor into that equation.” The association sees this issue as a major consideration to be addressed and wants to begin, “integrating ourselves into this conversation and figuring out how trailers can work with cars to create safer roadways.”

NATM’s mission will always remain that of promoting trailer safety and contributing to the success of the trailer manufacturing industry through education and advocacy. Its annual convention, “provides a great forum for the education part of our mission,” says Kendra. “We have about one thousand attendees each year. Attendees are able to come away with new practices and implement those in their businesses.” Various workshops, technical forums, its official Tracks magazine and networking opportunities all serve as part of NATM’s outreach strategies.

NATM’s thirty years of education and advocacy will see its biggest shift in the form of technological advances. Vehicles with V2V communication have received much attention, but there has been little to no conversation about how vehicles will recognize that something is being towed and how that will be communicated to other vehicles. “How we can help facilitate that is going to be a really important challenge for us coming up,” says Kendra, adding that the NATM has created a technology committee which includes auto and trailer manufacturers as well as suppliers in order to have these groups come together to, “make sure that what they’re coming out with can work synergistically.”

Kendra feels that the most immediate challenge facing the trailer manufacturing industry is that of a skilled worker shortage, which is notably affecting the entire manufacturing sector. In a proactive attempt to address this challenge, the NATM has been working with human resources advisors and other professionals to develop workshops and education on how to best recruit and retain employees. The association is also looking at how its members can advance their own employee skills with the support of technical schools or in-house training.

“There are a lot of new projects for us in that department on the horizon,” she says. “We’re excited to have that chance to support our members as they face the challenge of trying to fill all of the jobs within their own facilities. As an industry we’re often overlooked. But the majority of our members are small businesses. A lot of them are family owned businesses that have been handed down from generation to generation.”

Ultimately, what is important to acknowledge is, “we can achieve so much more together than we can achieve alone … having an opportunity as the association to support this industry that’s filled with people who are truly committed to safety and providing them every opportunity to improve the safety of their products and ultimately be successful as a business, is incredibly important to us. We plan to keep doing that for many years to come.”