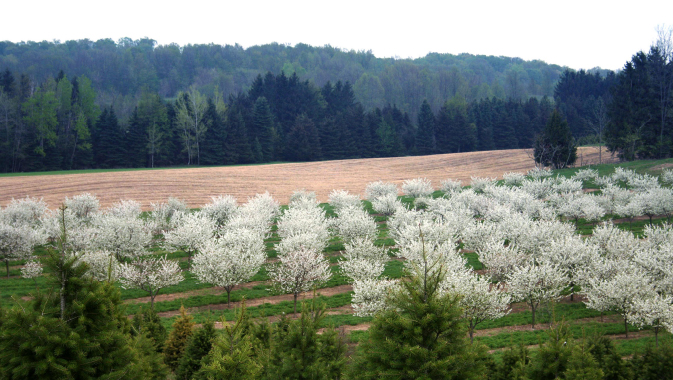 Not far away from the urban bustle, Oceana County is a scenic, agricultural community that enjoys a high quality of life along the shore of Lake Michigan. For twenty thousand residents who call the county home and thousands of tourists every summer, the county provides unique recreation and relaxation for everyone.
~
The main economic sector of Oceana County is agriculture, which includes growing crops, raising animals and agricultural processing. In fact, Oceana County is the fourth-largest fruit growing county in the state of Michigan and the third-largest vegetable growing county in the state.

The county is probably most famous for producing asparagus, as Michigan is the largest grower of asparagus in the country. The National Asparagus Festival arrives in Hart, Michigan on the second weekend in June every year. The city is adorned with green decorations, and eight to ten thousand people travel to the county for various events including golf tournaments, fly-in air shows, a parade and a beauty pageant where the only Asparagus Queen in the country is crowned.

Oceana has a strong tool for drawing food processing business into the county called the Starting Block Kitchen Incubator, which has a commercial kitchen, a USDA meat processing plant and office spaces for business to get started.

Following agriculture, tourism is the second largest economic source for this county located on Lake Michigan. Silver Lake State Park attracts many tourists to the county as well. Located near Mears on Lake Michigan, the state park is composed of mature forest land, and it includes a two-thousand-acre sand dune mountain.

Agricultural tourism, or agritourism, is also a popular tourist activity in the area. Lewis Farm Market is known for its farming entertainment and petting zoo, and Country Dairy Farm Store has a popular restaurant and is famous for its milk bottling and ice cream and cheese making. Both locations and other farm markets in the area have farm tours throughout the summer.

The economic development corporation in Oceana County focuses much of its time attracting new businesses to the area. The main hurdle for this venture is establishing more broadband internet connections across the county. High-speed internet is a must for new businesses and residents who work from home. Anne

“Oceana is a great place to work and live, and we are really pushing broadband, because we are a rural community, and there isn’t a wide range of broadband available, especially towards the eastern part of the county,” explains Anne Hardy, the executive director of the economic development corporation.

Anne has spent her whole life in Oceana County. “I’ve grown to love this area,” she says, “and as a part of that, I am the chairman of the Heart of Main Street program. I really love it here. I’m very proud of this area.”

Some of the largest employers in Oceana County include Peterson farms in Shelby, Arbor Farms in Walkerville and Gray & Company in Hart. Oceana County is close enough to automotive- and aerospace-related industries to receive some of the outgrowths from those operations. There are many machine shops and other high tech factories because the county is blessed with proximity to Grand Rapids, Holland and companies like Herman Miller. “There is good highway access to those markets, and that allows us to have shops here in Oceana County that support the larger companies,” says Larry Byl, the county commissioner for the Oceana county economic development corporation.

Oceana County’s high quality of life enables residents to raise a family in a safe, rural community. Roughly one-third of Oceana County is federal and state land; it has a lot of open spaces and a spectacular view of rolling hills. The county is often compared to Traverse City or the Manistee area.

“We have something here for everyone. You can hunt; you can fish; you can use watercrafts, see the sand dunes, and we have some really great, unique shopping stores,” says Anne Hardy.

A converted rail trail runs through Oceana County, and it is a big draw for bicyclists in the area. The trail was completely reconstructed in 2016; the renovation included laying asphalt to cover the entire trail and make it handicap accessible. The trail is named the William Field Memorial Hart-Montague Trail State Park.

There are roughly twenty-eight to thirty miles of Lake Michigan in Oceana County, with public access areas including Township Park, county parks, state parks and the Little Sable Point Lighthouse.

Oceana County has two community centers. In Shelby, the Ladder Community Center is about two years old, and it is a huge benefit for residents. This one hundred-year-old brick industrial building was renovated to create a student and senior drop-in center for the community. Another addition to the community is the Pentwater Artisan Learning Center that teaches all sorts of creative crafts.

There is a hospital located in Shelby and a state-of-the-art medical care facility that has recently been renovated for both Alzheimer’s care and extended elder care. “We have people that may move here from Grand Rapids, Chicago or Detroit to retire here along the lake. I know some that also brought their parents with them, and their parents end up spending their last few years in the medical care facility because it is such a state-of-the-art facility,” says Michelle Comstock. She is the president and CEO of Shelby State Bank and a part of the economic development board. The Cherry Blossom Manor Care Home is an assisted living center that is close to the Oceana County Medical Care Facility and the Oceana County Council on Aging.

The residents of Oceana County are very supportive of business and growth in the area and are invested in their communities. “From my standpoint as a village administrator, the people that I get to meet are unbelievable and outstanding. What I notice is the quality of people and the respect they tend to have for one another,” explains Chelsea Stratil, the village administrator for Shelby.

Continued diversification of the industrial base is a priority for Oceana County. Diversity is important for the economy, and dependence on one industry can be devastating to a community. “Michigan has felt it with the car industry,” explains Larry. “When we were so dependent on the car industry and that went south, the rest of the nation had a cold, but we had pneumonia.”

A few years ago, there was also a disastrous frost that affected agriculture crops. The local food processing plants did not run double shifts and hire as many people as they normally would, which had a negative effect on the area’s economy.

It currently has two steel foundries: one in Rothbury and one in Hart. It has fabricating and machining industries, a label company, sawmills and even a horseshoe manufacturer located in the industrial park in Shelby.

The economic development corporation has a difficult time finding skilled workers to hire. Its unemployment for this year is 7.5 percent, which is considerably lower than the last decade. “Right now, everybody’s begging for skilled workers, and we are working with Michigan Works for some training dollars for those companies that need workers,” says Anne Hardy.

The county could also use more post-secondary education institutions. It has a few community colleges in the neighborhood but there are no large universities, and students will often leave the county to attend university in another area and not return afterward. “I think that’s fairly typical with rural communities. It’s something we are always fighting – how to keep our talented, young people in our community,” explains Larry Byl.

In the village of Shelby, some of the members of council and planning commission are preparing to attend training to become a Redevelopment Ready Community, which is a certified title given by the Michigan Economic Development Corporation (MEDC). The certification is a formal recognition that a community has a vision for the future and the necessary plans in place to achieve its goals. There are a few other municipalities in Oceana County that are following Shelby’s example and redeveloping communities.

Today, the economic development corporation remains focused on retaining its current companies and its employees, expanding those companies and attracting new businesses to the area. “As a community, we care from the cradle to the grave, between our school systems and our medical facilities,” says to Larry Byl. “Most of it is taxpayer supported, so there is a tremendous amount of community support for that.”