Pride in its Past, Faith in its Future 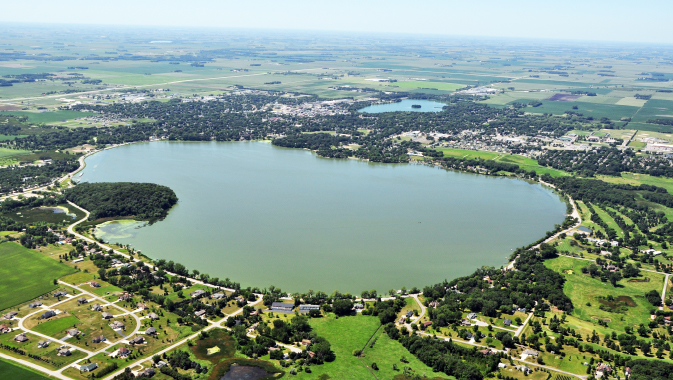 Waseca County, with its population of close to 19,000 people, is comprised of the four cities of Janesville, New Richland, Waldorf, and Waseca. The county seat of Waseca has a population of approximately 9,500. The county is situated in the Southern Minnesota Lakes Region in south central Minnesota and has the U.S. highways 13 running north to south and 14 running east to west. Highway 14 intersects with Interstate 35 at the city of Owatonna, seventeen miles east of Waseca. The Interstate 35 takes commuters to the state capital of Saint Paul and its adjacent most populous city Minneapolis, about an hour from Waseca.
~
‘To know the past is to understand our link to the future,’ according to the motto of the Waseca County Historical Society.

Positive reflection upon the past serves as a precursor to transformation via goals and visions. However, the history is only part of the equation. Respecting the past while focusing on the present and the adoption of new synergies to embrace the future will be the determining factor in success. Waseca County has undertaken to do just that.

Waseca County, Minnesota has a rich history dating back to 1857, the year it became a county through the state territorial legislature. Prior to the arrival of white settlers such as the Germans, Irish, and Swedish, the land was home to the Dakota and Winnebago Native Americans.

In fact, Waseca is derived from a Dakota word meaning ‘rich,’ which is appropriate considering that Waseca County and Minnesota as a whole have some of the most fertile soils in the world. Hence, agriculture is Waseca County’s most predominant and economically viable industry, followed by manufacturing and healthcare.

Waseca County Economic Development Coordinator Gary Sandholm would like to see more investment in transportation infrastructure statewide, but particularly along a short section of highway 14 between Owatonna and the city of Rochester, forty miles to its east. The highway changes from a two-lane to a four-lane and back to a two-lane between the two cities. Gary explains that highway 14, from Mankato to Waseca’s west, to Rochester, “is a very key commercial artery for movement of goods and services throughout southern Minnesota and the upper Midwest.”

The city of Waseca has switch facilities to accommodate both the Canadian Pacific and DM & E railways allowing distribution throughout the region. The city also has a municipal airport. Commercial air connections are at Minneapolis-St. Paul International Airport just over an hour away.

With agriculture being Waseca County’s main industry, there have been a number of related offshoots particularly in research, biobusiness, and agri-tourism. The AgriBusiness Committee of the Waseca Area Chamber of Commerce works in close affiliation with such partners as agricultural advisors, farmers, and the scientists researching at its nearby universities and colleges to support initiatives that strengthen this vital sector. The Agribusiness Committee is an enormous stimulus to Waseca County’s success as it creates a forum, “for people to be sharing what is going on throughout the region,” says Gary. “It can be the start for action.”

The University of Minnesota’s Southern Research and Outreach Center (SROC) was established in Waseca in 1913 and plays a crucial role in research activities related to climatology, entomology, soil science, and dairy farming, among others. SROC is part of Minnesota University’s College of Food, Agricultural and Natural Resource Sciences (CFANS). Gary explains that the center, “does a very wide range of research with crops, animals, and also how to utilize crops,” and that, in the near future, some policies will possibly be presented to the private sector.

Gary mentions that a farm brewery and tap room should be opening five miles north of Waseca sometime in the fall of this year. The Half Pint Brewery Company is being established by Mike McQuery from Portland, Oregon who selected the location, “because of the hops research that’s being done at SROC.”

Also located in Waseca is the Agricultural Utilization Research Institute (AURI), a statewide organization at SROC that was created in 1989 and is funded by the Minnesota legislature. AURI’s mission is to further promote economic sustainability by advancing new technologies and engaging in research specific to agricultural commodities and value-added agricultural products.

AURI operates, “to bring people’s ideas to where they can be commercialized,” says Gary, and it, “works in specific regions to try to find additional and better uses for what we grow here.”

Biobusiness is also big business in Waseca County with an abundance of opportunities in this area. These include commercialization and development of technologies specific to bioscience which gives rise to other business possibilities such as those found in manufacturing, distribution, and marketing. There are incentives for construction of new buildings, Waseca Development Corporation (WDC) lending programs, and the United States Department of Agriculture (USDA) Rural Development Loans to entice business interests.

“The primary incentives we have to work with directly from the public sector are tax abatement and tax increment financing,” says Gary. “These are commonly used throughout the country, but being a rural area, the USDA Rural Development Loans can be a very important piece for business. It can be a small business. It can be a very large business depending on the program that is being selected.” He adds that building construction incentives, for example, are, “primarily related to property taxes, and that’s where the tax abatement and tax increment financing can be very important tools.”

By far, “Farmamerica is the largest agri-tourism faction we have,” Gary adds. Farmamerica is a 360-acre agricultural interpretive center established in 1978 by the Minnesota legislature. Its goal is the preservation of the state’s agricultural heritage through education. The interpretive center showcases historical farming processes and equipment and connects the earlier pioneer days to the latest technologies. Gary explains that a focus on the agricultural industry is an ongoing process. “Like any other business or industry, it changes, and Farmamerica is working to try and keep up with that.”

With respect to the manufacturing sector, Gary relates that there are approximately twenty manufacturers in Waseca County with ten to twelve in Waseca that are of substantial size. The largest employer is Quad/Graphics which is a relative newcomer.

In 2014, Quad/Graphics acquired Brown Printing Company – founded in Waseca in 1957 – for $100 million. Quad/Graphics provides printing and typesetting services for numerous magazine publishers and catalog marketers and has more than seventy production facilities globally.

Birds Eye Food Incorporated, a division of Pinnacle Manufacturing and Production, has about 115 employees at its 374,000-square-foot Waseca vegetable freezing facility that primarily processes sweetcorn and peas. The plant is also involved, to a smaller degree, with specialty packaging.

Another manufacturer noted was Itron Incorporated, a company that manufactures equipment for remote readings of water and gas meters.

Gary relates that there are other companies engaged in manufacturing and fabrication that are, “… very current with technologies, but it’s something that we still need to be aware of and keeping everybody up to speed.”

There is a Mayo clinic in Waseca as well, so the healthcare industry is also important to the county, especially when considering that, by 2020, more than twenty percent of Waseca County’s population will be over sixty-five.

A housing study was completed in 2016 indicating that there is a need for housing, “basically across the age and income spectrum. Senior housing is something that will be a very important asset to our housing offerings … As our senior housing expands, we will be able to have other homes that can be starter homes for young families.”

While Waseca’s population is growing and expected to be over 10,000 by 2035, Waseca County is seeing a slow decline in population which is expected to be approximately 18,935 by the same year. This is according to a community visioning project being conducted by LHB, Inc. and Future iQ sponsored by B.E.S.T. Further results of this project will be unveiled at the fall 2017 business summit.

“This is something of great concern,” he says. “One thing that we are looking at with our location, we are in an area that is seeing population growth to the east of us and to the west of us and currently to the north of us, so we’re not isolated … We are looking at stepping up the housing construction. We have a lot of people that would like to live in Waseca.” He notes that the city has included additional incentives such as the waiving of utility connection fees and a tax abatement program, “to stimulate new house construction also.”

Much of Waseca’s housing is rental properties and apartments, and many residents have not been able to find the type of housing that meets their needs and budget. “So, the decline in population is something that we feel within the next few years we have a very good shot at stemming that tide … We’re in a good neighborhood. With the twin cities, Mankato, [and] Owatonna kind of surrounding us, we’re in an area where things are happening. That always makes it a desirable place for people to live.”

Waseca County has several colleges and universities – eleven, in fact, aside from Minnesota State University – that are an easy commute for students. These include Bethany Lutheran College in Mankato, South Central College with two campuses in Faribault, and North Mankato and Riverland Community College in Austin. The institutions that have the most significant impact are the community colleges with workforce training and vocational programs, explains Gary. “They are well plugged into a number of local and regional organizations,” such as the Small Business Development Center (SBDC) which is funded by the United States Small Business Administration and part of Minnesota State University.

Gary says that the state as a whole has no shortage of lakes and trail systems that can accommodate hiking, biking, ice fishing, and snowmobiling for the outdoor enthusiast. Waseca County is working to expand its trails to enhance other outdoor recreation options in parks and lakes. He also adds that “There’s a very vibrant music sector in Waseca County and in southern Minnesota in quite a variety of genres. On virtually any week, you can find a good group of musicians to listen to within thirty minutes of where you’re sitting.”

Gary has been a resident of Waseca for about two years and indicates that “The setting is nice. If you want the amenities of a large city, you’re there in an hour. So you can have the best of both worlds.”