Where Rivers Meet and Opportunity Awaits 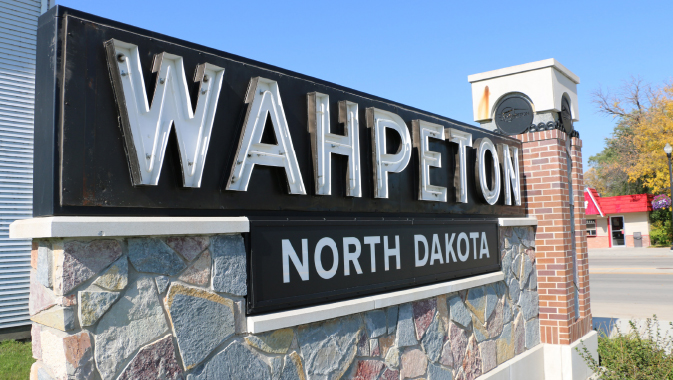 Nestled along the rivers which serve as the state boundary between North Dakota and Minnesota, is Wahpeton, North Dakota. Here a population of 7,900 people enjoys a rural lifestyle with all the services of a larger center.
~
Wahpeton may have a small population spread over a large area, but it is big in opportunity. It is regarded as North Dakota’s most industrialized region, with the largest manufacturing employment per capita in the Upper Midwest. This is a place where tradition and history is preserved while city leaders working to ensure a bright and prosperous future.

Growth in the area was initially a result of the St. Paul and Pacific Railway, now Great Northern, as well as flat boat activity along the rivers. Transportation access still serves Wahpeton well in terms of growth and development.

“We’re uniquely located between I-29, which is a major north-south international interstate and I-94, which is an east-west interstate. We’re ten miles from one and twenty-three miles from the other. Oftentimes, when you are located adjacent to that major transportation hub, other utilities will follow,” explained City Auditor and Finance Director Darcie Huwe.

This rural community is chock-full of amenities. “We have Midco Communications, and they recently put in a major investment in fiber optic line to provide one gigabit speed internet to our homes in the area, which is very unique for a rural community,” said Huwe. Energy is offered at an affordable rate that is well below the national average and the city has available land with ample groundwater supplies to support additional growth.

Wahpeton is a hardworking agrarian community recognized for its production of oats, sugar beets and more. Given its location in the southeast corner of the state, in one of the most fertile regions in the world, it is a perfect fit for agricultural production and processing. “The ag-economy definitely influences our local businesses, our attitudes, and our personal incomes,” noted Huwe, crediting the impact the value-added agriculture sector has had on Wahpeton’s development.

Though farming is a traditional industry, in Wahpeton, farmers are employing advanced technology and innovation to improve efficiency and increase yields in their operations, while more effectively using available resources to find new ways to grow sustainably.

“We have several agricultural manufacturers in the area that are using GPS, so you may see a tractor with no people in it or drones that are being used for agricultural surveillance. They use that to develop strategies for crop management,” said Huwe.

Some of the city’s major employers include contract manufacturer ComDel Innovations, sugar beet producer and processor Minn-Dak Farmers Cooperative, well-known machine manufacturer Bobcat and global agricultural and industrial products firm Cargill. Also here is WCCO Belting, one of the largest agricultural belting manufacturers in the United States. The company is repeatedly recognized as the state’s exporter of the year.

As an economic player, the city is home to two of the state’s thirty-six industrial parks. These are served by rail and benefit from access to the foreign trade zone located at Grand Forks International Airport. It also has a modern medical facility in the area, CHI St. Francis Hospital.

Wahpeton covers 3300 acres and has the resources and infrastructure needed to reach markets across the U.S. and Canada.

Of its 3300 acres, 135 acres belong to the North Dakota State College of Science, originally established as Red River Valley University in 1889. It is a junior college, business college trade school and technical school that supports workforce development efforts in the region and serves as a centerpiece for the community.

One of the biggest challenges facing Wahpeton is the fact that it has more jobs than available workforce. Each day more than one thousand people travel into the city for work.

Draws to the community include a reinvigorated downtown complete with retail opportunities and restaurants to satisfy even the pickiest palate as well as the Chahinkapa Zoo – accredited by the American Zoo and Aquarium Association and home to the state’s only orangutan – and Chahinkapa Park.

“Chahinkapa Park is a very big and unique wooden riparian park that transitions from our city’s main street and as you proceed north in the riparian corridor, you move through a baseball field, a city park, a swimming pool, and it transitions into a golf course and an archery range,” described Huwe.

Outside of the Chahinkapa Zoo is the Prairie Rose Carousel, an attraction that is appreciated by locals and visitors alike. “All the horses are wooden, hand carved and hand painted, and they were sponsored by local businesses. They all have unique names and features,” said Huwe, noting that her favorite is Sugar, which is sponsored by the Minn-Dak Farmers Cooperative.

There is no shortage of recreation in Wahpeton. Have you ever wanted to golf in two states at once? If so, you can take in nine holes in North Dakota and nine holes in Minnesota at the Bois de Sioux Golf Course – one of the unique landmarks in the city and the only one of its kind in the country.

“We actually own the golf course land in Minnesota. We had to go to the state legislature to have them amend the law to allow us to own property outside of the state and it serves a dual purpose where it can be used as a flood control measure to store water in the event of a high-water event,” Huwe explained.

Wahpeton is also a place where history is preserved as its residents push ahead into the future. There has been a big public-private investment in the city’s downtown. After more than $5 million in investment in Dakota Avenue, Huwe says, “I think we are turning a corner. I think we’ve extended the lives of very aged buildings to make sure they’ll be around for the next one hundred years and preserve our history. We are in the process of having some changeover as to who and what occupies those buildings,” she continued.

“We’ve been very fortunate as far as when one business leaves, there is another business waiting to get in.” Huwe was referring to the loss a long-standing anchor store in Wahpeton’s downtown. Its J.C. Penney was the second oldest in the United States and was a fixture in the city. Within days of announcing the closure, multiple retailers were in competition for the space. Golden Rule was the winner, and its highly anticipated grand opening is November first.

Wahpeton is also excited about the addition of a new restaurant called The Boiler Room, a fine dining experience that did not previously exist in the city. “The Boiler Room is a very current, up-to-date restaurant that is located in a very old building on Main Street, probably our most visible corner at Fourth and Dakota, and it’s not unusual to have a line out the door,” Huwe explained.

She also awaits the completion of another restaurant that is under construction called the City Brew Hall. “It’s our former city hall that’s being remodeled into an event center, and they are targeting specialty weddings looking for a unique venue with exposed brick walls. I can’t wait for it to be done!”

Wahpeton has a pro-development attitude that extends beyond the city and into the larger region making it a great place for business to relocate, grow and thrive. The Southern Valley Economic Development Authority is a partnership being established between Richland County, North Dakota and neighboring Wilkin County, Minnesota to support regional economic development.

“We are currently working on revamping how we pursue economic development in our region. In the past, it was done by individual entities, cities or smaller communities,” explained Huwe, The purpose of the joint partnership is to, “coordinate the resources in a two-county area and really use the assets in the area to start looking for potential that could be recruited on a larger scale.”

In the meantime, Wahpeton will identify ways to improve the available housing stock with a variety of options and prices to accommodate the expected growth in population.

“We try to encourage that supply side by making lots available for homes as affordably as we possibly can to influence that to the best of our ability. At the city, we do some spec homes, and we’ve created partnerships with developers to come and provide 190 new rental units in a variety of locations and rent ranges to really encourage the different levels of skilled workers to look at our community,” said Huwe.

“Workforce attraction is one of our primary goals to make sure that we have a community that is resilient and sustainable. We need to make sure we feed that influx of new young people to work those industrial jobs that keep our community running,” explained Huwe.

Wahpeton is well on its way to ensuring it will continue to prosper while both paying homage to its past and embracing the future. Huwe noted that, “If you saw what we see, you’d know why we live here.”