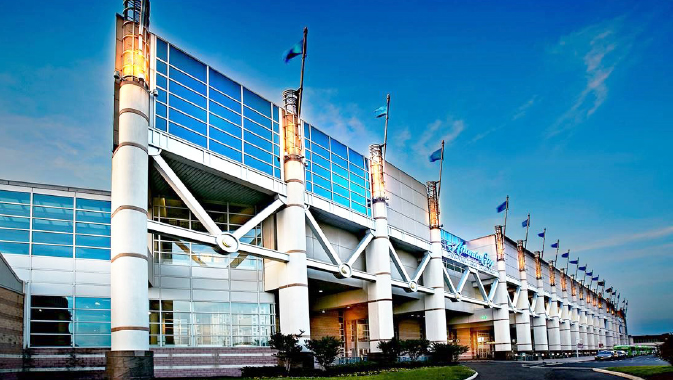 Boardwalk Hall was formerly known as the Atlantic City Convention Hall and was the city’s first convention center. Built in 1929, it is the home of the Miss America Pageant and is an iconic landmark in Atlantic City that draws tourists to the area. The Atlantic City Convention Center was built in 1997 and is now the largest convention center in New Jersey. Both are managed by Spectra Venue Management. Formerly known as Global Spectrum, Spectra Venue Management has been in business since 2000, managing convention centers, arenas and stadiums around the country.
~
The private management company Spectra Venue Management has contracts with the New Jersey Casino Reinvestment Development Authority (CRDA) in Atlantic City, New Jersey, to manage venues on its behalf. The CRDA is the owner of the Atlantic City Convention Center and Boardwalk Hall for which Spectra is responsible for overall management including promotion administration, maintenance of the building, accounting, risk management, the daily management of food and beverage and all other operations associated with the venues.

Spectra has an in-house sales team. However, for the Atlantic City Convention Center, it engages with the center’s sales and marketing group Meet AC Inc. for sales and booking.

The private management group subcontracts out to two outside third party companies for other specific services. For its audiovisual services, it hires the company PSAV, and it provides guests with WiFi internet sales and services through a company called Smart City Telecom.

Dean Dennis, the general manager for Spectra has been working with the Atlantic City Convention Center for almost a year. “I was blessed to walk into an outstanding team here of professionals. It is very well run and very organized,” says Dean. “Our repeat business and our survey scores really reflect the great job that our team does collectively in servicing our guests.”

The team at the convention center has great relationships with its trade unions, and the unions are always willing to take part in delivering exceptional service. For example, the carpenters’ union had its own customer service training for its people this year. “They are very much a part of our team, and they do a great job of helping us to meet the expectations of the people who come to our building.”

The Atlantic City Convention Center has recently undergone a few upgrades, and it plans to invest more in capital improvements soon. It recently completed a million-dollar WiFi system upgrade allowing for state-of-the-art connectivity for its clients. Not long ago, a marquee was installed on the side of the building to welcome guests as they come into Atlantic City via the expressway; it has a large sign that reads, ‘Welcome to Atlantic City.’

The convention center has an additional seventeen million dollars set aside for various improvements including plans to renovate restrooms throughout the entire building, work on Exhibit Hall A to give it more of a ballroom atmosphere and new LED lighting in the exhibit halls and the atrium. It is also developing bids for a wayfinding and signage upgrade in the facility, and it is converting the old payphone spaces into what are called laptop lounges, where clients are able to use the center’s high-speed internet connection while relaxing in a comfortable area.

Much of the equipment in the convention center has also been upgraded or replaced in the last couple of years. It has replaced chairs, staging tables, waste receptacles and concession carts. “A lot of these things people don’t even notice, but it is really important to the overall operation and keeping us looking fresh and new,” explains Dean.

The safety and security of the building is another primary concern. “There is a certain awareness throughout the country about how to make sure our venues and the people who visit these venues stay safe,” says Dean. However, making sure that the security does not interfere with the guests’ experience is also essential.

The Atlantic City Convention Center is particularly successful because it pays attention to clients’ every need and this focus on service runs through the entire organization. “Our repeat business is such that we really spend a lot of time separating ourselves [from competition] with our service,” says Dean. “We also think of ourselves as creative; we offer unique food and beverage options, various upgrades of menus, AV equipment and other things we can do to set us apart from a service aspect and a creativity aspect.” Clients enjoy being treated as if they matter, and the convention center puts a lot of effort into establishing that.

On the roof of the building, the convention center has one of the largest roof-mounted solar arrays in the United States, as part of its green objective. Assembled in 2009, it produces approximately thirty percent of the building’s electricity and so saves a significant amount of money. Recycling is also an important priority in the building. The newly purchased waste receptacles encourage recycling by attendees and exhibitors.

“Industry wide, we have made a concerted effort to communicate with our clients and exhibitors to not bring brochures and paper products, and if they do, to use the recycle bin. All we can do is work together to increase our sustainability efforts through communication with our clients,” says Dean. The food and beverage team monitors all food waste and tracks food production. It donates surplus food to a homeless shelter located close to the convention center. Another bonus for the environment is that close to ninety percent of all the cleaning products used in the building are certified green products.

The future is bright for convention centers. “I think there are a lot of good things on the horizon. We are very excited about the renaissance of Atlantic City and the comeback that it is experiencing right now,” says Dean. The convention center’s place in Atlantic City is a big part of its attraction; it was designed to incorporate and reflect the city’s seaside location.

The world-famous boardwalk, the beaches and the casinos are all added benefits to operating in Atlantic City. For the past twenty years, the convention center has offered exceptional services including free WiFi, an on-site audiovisual provider and unique food and beverage options, making it the preferred location for many conventions, trade shows and meeting planners.