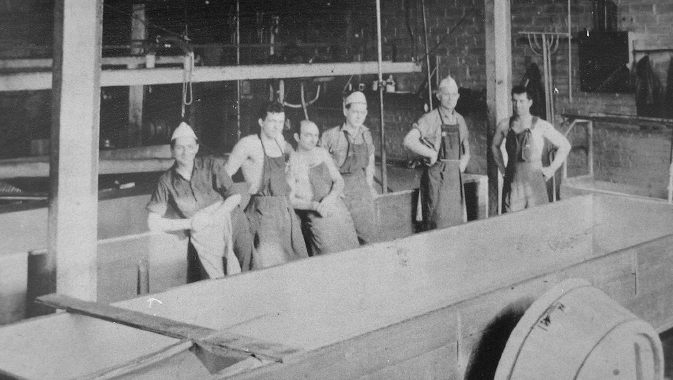 When one thinks of the history of small family farms in the United States, one imagines hardworking family members committed to a particular way of life as much as making a living. Most Americans view family farms as being central to an identity rich in heritage and tradition. And although modern farming technologies may have overtaken older ways of doing things, there is one dairy farm in Ohio that holds true to its traditional roots. Minerva Dairy, entering into its sixth generation of being family-owned-and-managed, takes pride in producing quality butter and cheese.

“Our only ingredients are just cream and sea salt, and we let butter become butter. If you did a taste test, you’d notice the difference,” says Venae Watts, the company’s Marketing and Communications Manager.

Minerva Dairy, of Minerva, Ohio, celebrated its 125th anniversary last year, making it the nation’s oldest butter and cheese manufacturer. Venae is part of the fifth-generation of the family to be part of this business and could not be happier upon reaching this milestone. “Our hearts and souls are here, and this is our family legacy,” she says. “It was a good emotional year for us.”

Max Radloff started the wheels turning in the dairy industry in 1894 by opening Radloff Cheese in Hustisford, Wisconsin. The marriage of Max’s granddaughter into the Mueller family, who were also involved in the dairy industry in Wisconsin and Ohio, set the course for what Minerva Dairy has achieved today. This is a multi-million-dollar business on a path of continued growth for good reason.

“Our family members had multiple dairy farms, and everyone one of them was making cheese and butter,” says Venae. Max determined that rather than the two families producing their own products, it would be more advantageous to bring production into the one location in Wisconsin.

Since there were no cooling tankers to transport products in 1935, Max moved all production to Minerva. As the ability to transport milk became more accessible, each of the original twenty-two locations was closed, leaving only the Minerva facility with approximately seventy-five employees.

The 70,000-square-foot production facility houses three slow churners to make butter in a more traditional manner as opposed to the high-speed churners most used in the industry today.

Minerva produces several butter lines with eighty-five percent butterfat, which is not common in the industry. These butters are manufactured “in slow churns, by the batch,” says Venae. “So they’re more of an artisanal butter, as the butter maker has to pay attention to the batch churn.” This slow-churning process “creates a butter that is a rich denser type of butter than your normal butter that sits on a [store] shelf.”

The company’s cheese varieties include Italian style Asiago, Romano, Parmesan, Cheddar, Gouda, and Monterey Jack, among others “We produce cheese in forty-two-pound blocks,” says Venae. “Our cheese goes to food service, baking, and an ingredient for the industry.” The plant is also kosher and halal certified.

Approximately four thousand retailers carrying Minerva Dairy products across the United States, and Whole Foods stores have also been carrying products in the mid-Atlantic region as of last February.

“We have dairy farmers in northeast Ohio. They are small family farms that we work with,” Venae notes of Minerva’s suppliers. “We’re all from the same area.” The herd size on these farms ranges from two to three cows to approximately seventy-five. “These are family farms that have been farming for generations. So they’re generational family farms, kind of the same as what we have.”

Many dairy farms in the United States raise Holsteins which are great milk producers but Jerseys are popular as well because their milk contains greater percentages of milk fat and milk solids. Herds that supply Minerva tend to be a blend of Jersey, Guernsey, and Holstein breeds.

Farming was a way of life that has faded out as the smaller farms disappeared, but in northeast Ohio, Minerva Dairy is unique in supporting this kind of farming. “We just hadn’t changed our way of life for generations,” she says. “That model used to be across the country and kind of [disappeared]. We’re still here, doing what we’re doing.”

Venae’s father still visits with each farmer during the Christmas season and is “devoted to the farmers… We do not have contracts with our farmers.” Rather, business is conducted and agreements sealed with simply a handshake. “That’s just the way we’ve always done it.”

All of Minerva Dairy’s milk comes from pasture-raised cows, and there is no denying that these cows provide the omega-6 and omega-3 fatty acids so essential to human health. A 2018 study from the University of Minnesota confirms this. “Researchers have found that cows fed a 100 percent organic grass and legume-based diet produce milk with elevated levels of omega-3 and CLA, and thus provides a markedly healthier balance of fatty acids,” states the report.

“All of our farmers have pasture available to their cows,” says Venae. “We really [believe] in the humane treatment of the animals and quality of life for the cows.” This means that cows have a choice to be in a barn on a cold day, for example, or out in the pasture on warmer days.

Additionally, Minerva Dairy visits the farms to assess the environment and the health of cows. The company has its own laboratory for testing such things as somatic cell count. Too high a count deems the cow as stressed, subsequently leading to lower-quality milk. “Somatic cell is very important,” states Venae. “Every cow is tested before it’s unloaded here, to make sure there are no antibiotics.” As well, all of the products are free of gluten, genetically-modified organisms (GMO), and recombinant bovine somatotropin (RBST), a synthetic growth hormone that other farmers use to increase milk production.

Minerva Dairy’s butter is always slow-churned. “Our butter tastes like butter that was made on the farm,” explains Venae. “Years ago, everybody used to make their own butter and cheese on the farm. By our process, we’ve kept that same rich flavor by using a churn.”

This slow-churning results in a product with eighty-five percent butterfat, although sometimes it may be 85.5 or 86 percent. “It’s not an exact science, because it’s an artisanal churn and process,” says Venae. “We don’t put anything into our butter. We don’t put air or change the color of our butter… Again, it’s not an exact science. It has more of an art form to it,” she says.

“We’re the little guy. So we don’t have the marketing budget or the reach, not even close, compared to any of our competitors,” she adds. “The reason our sales grow is word of mouth mostly. I think that’s how we’ve made it for five generations. We just continue to make a good quality product and let the product speak for itself.”

On its 125th anniversary, Minerva Dairy decided it was time for a rebrand. Why? Because the packaging had not been changed since WW2, and it was determined that consumers are interested in how butter is made and where it comes from. It is really a case of consumers, “looking for a richer butter,” says Venae. “We’re doing what these people are looking for. I need people to know that we’re here… Sometimes the way to get someone’s attention is to change up your packaging.” The new pattern, inspired by farm days of the past, will be on store shelves this year.

And expanding into Canada is something Venae has been considering. “I’ve definitely been looking into it. I think that makes the most sense,” considering that Ohio is closer to Canada than other parts of the United States.

In March 2020, Minerva Dairy launched a new product that is expected to be on shelves in the summer. “We’re launching a one-pound roll,” of butter, Venae says. “We have a two-pound roll, which is our flagship item we’ve been making for generations.” This new product is in response to consumer trends in which smaller sizes are more in demand.

For a multi-generational company, surviving and – more importantly – thriving, is no easy feat, yet Minerva Dairy is entering its sixth generation of ownership. “It’s your family. It’s what you do every day, all day long. It’s what you’ve grown up doing,” Venae says.