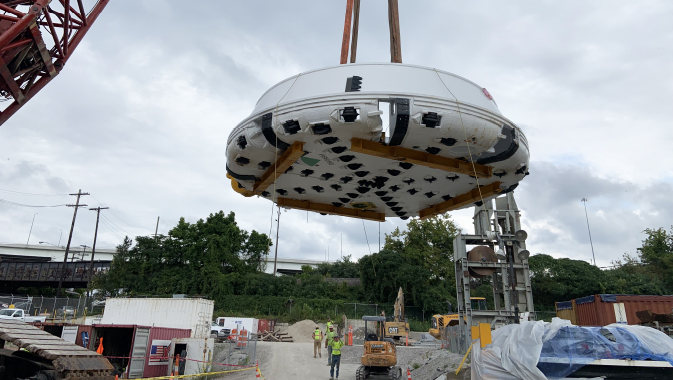 Many U.S. companies haul heavy things, but to safely and efficiently transport tunnel-boring machinery or nuclear power transformers that weigh a million-and-a-half pounds needs more than the right equipment – it demands years of experience.

Headquartered in the City of Piqua near Dayton, Ohio, PSC Crane & Rigging seamlessly combines all the elements of knowledge earned through almost 90 years of hands-on experience. Precise planning, state-of-the-art machinery, and highly trained and certified staff move and maintain industrial equipment to the highest standards in the Midwest and across the country. From conveyor-line installations to moving massive stamping presses, installing injection-mold machines, and relocating entire plants, PSC Crane & Rigging powers forward in the footsteps of its founder, Earl F. Sever Sr.

Decades of trusted service
An electrical linesman back in the early 1930s, Sever soon shifted his focus and “had the foresight to create a business that would withstand the turbulent times of the Great Depression,” as the company says.

His new business venture – dismantling plants and demolition – saw him founding the Piqua Steel Company in 1933, and traveling across the U.S to take on jobs. Although the name of the business was changed to PSC Crane & Rigging, the company created by Sever remained family-owned, an ownership today in its fourth generation, and a source of pride for Earl Sever IV (Randy) and Jim Sever.

The company’s Executive Vice President of Business Development for the past decade, Randy started with the company at age 25. Now 50, he says the company still upholds the principles of his great-grandfather, which have been passed down through Earl Sever Jr. and Earl Sever III (Lynn) – trust, honesty, dignity, and respect. “Those are the pillars our company was founded on, and the ones we still firmly believe in and hold dear to our hearts,” he says.

With a dedicated staff of about 175 and a diverse range of clients supporting the business, PSC Crane & Rigging grew to approximately $50 million in 2019. While the COVID-19 pandemic has affected business revenue in 2020 by roughly 20 percent this year (based on projections) – and delayed some projects until 2021 – the well-managed company did not lay off any employees and has taken this opportunity to further develop systems and processes, hire additional key personnel for continued growth, and train staff members.

As well as its home base of Piqua, PSC Crane & Rigging has locations in Plain City, OH (Columbus), and acquired an existing company in Milford, OH (Cincinnati) in January this year.

Essential business
Fortunately for the company, many of its clients were deemed essential businesses and kept working through the pandemic. While PSC has experienced some delays with new equipment installations in the stamping press industry (equipment arrives timeously from Japan, but installation is delayed as Japanese technicians serve a two-week quarantine), other large-scale projects are in the works.

One set to break ground shortly is a $300 million food and beverage expansion.

With customers in key sectors – including automotive, energy, general manufacturing, and food and beverage as it applies to industrial contracting – PSC Crane & Rigging has recently added fabrication to its many services with the recent Cincinnati acquisition.

Growing its crane fleet over the past five years and expanding its special projects division, the company is handling more specialized heavy lift and heavy transportation projects in the power generation, petrochemical, chemical, and underground tunnel boring sectors.

And with strong ties to some of the world’s best-known automobile manufactures, PSC Crane & Rigging is seeing considerable growth in that area, together with increasing services to electrical and mechanical contractors through its Columbus branch.

“We’ve got our eye on the market, and we’re always looking for companies that are a good fit and will help with our footprint, so long as they align culturally with us,” says Sever. “That’s a huge part of it, since we want to make sure we maintain a good work ethic and culture.”

All sizes, all good
Taking on projects coast-to-coast, the company’s assignments include an eight-month-long project in California, an emergency transformer change out in Texas, an entire plant relocation from Seattle, Washington, a new TBM lift & lower into place in Washington D.C. and a complete manufacturing line relocation from Mexico to Ohio to name a few.

There really is no limitation to the types of clients the company takes on. “We’ve got some very good core key accounts – regionally based – that allow us to be a national player,” says Sever. “And because they sole-source a lot of work to us, we basically travel the countryside with them.”

Depending on the size and complexity of the work, PSC Crane & Rigging will send key personnel – sometimes up to half its workforce – and specialized equipment to sites across the United States.

SC&RA – letters with real meaning
Occasionally, the company will partner with friends in the industry through relationships it fosters via the Specialized Carriers and Rigging Association (SC&RA).

Founded in 1948, the SC&RA acts on behalf of its over 1,400 members from 46 nations active in crane and rigging, specialized transportation, and related work. A proud member of the Association, PSC recently received the SC&RA Longevity Award for its 35-year-long relationship.

Additionally, Sever is serving as this year’s Chairman of the Crane and Rigging Group governing committee. “All in all, the SC&RA is a very well-run organization that provides many, many benefits to its members, and it’s definitely worthwhile being a member.”

For its California automotive work for [Tesla], PSC joined forces with Long Beach-based Bragg Companies, another family-owned business known for its crane and rigging expertise. Closer to home, PSC will soon work with Omega Morgan, known for moving technical equipment, transformers, and even bridges.

“Omega Morgan has a good customer asking them to do some installation and heavy rigging work in our neck of the woods,” says Sever of the company who reached out through their relationship with the SC&RA. Along with Bragg Companies and Omega Morgan, PSC also works with New York-based Bay Crane Companies, a group that provides heavy hauling, transportation and logistics services.

Clean Water Act
In the past few years PSC has seen significant growth in the tunnel boring industry, coinciding with the focus on the Clean Water Act. A 1972 U.S. federal law to make waterways safer and reduce pollution, the act establishes stringent water quality standards.

This has resulted in more underground tunneling projects taking shape across the nation, and the creation of massive storage tanks designed to prevent untreated water from contaminating systems.

“This is not just a problem in the United States, but a problem all over,” says Sever, “so the United States has taken it head-on, investing billions of dollars throughout the nation with the Clean Water Act to keep our natural waterways from being polluted with raw sewage. That’s the effort that’s at hand.”

Expanding now into lifting, lowering, and skidding tunnel boring machines (and the infrastructure components used for supporting clean waterways) into final position, the company is often called upon by underground tunneling contractors for its vast experience.

Prestigious recognition
The company has earned numerous awards for its work over the years. One of the most recent was in 2019 from Japan-based manufacturer Honda. Coinciding with Honda’s 40th year of production in the U.S., Honda honored the top one percent of its suppliers – 22 out of 2,200 – with PSC Crane & Rigging prominent among them.

Monica Oliverio, Department Manager for Honda’s North American Indirect Procurement Department, emphasizes how businesses like PSC make the Honda company even stronger. “This complimentary and valued relationship is an important part of our mutual success.”

Growth and the future
To meet the requirements of customers today and tomorrow, PSC has made a capex investment over the past four years of approximately $18 million. This includes heavy transport, skidding, and lifting equipment, including its recently purchased 900-ton J&R LIFT-N-LOCK® Hydraulic BOOM Gantry.

Well-structured for growth with its exceptional team and investments in equipment, PSC is positioned exactly where it wants to be for the coming decade. “We want to continue to grow so long as we can properly manage our services and deliver high-value,” says Sever.

“Controlled growth means everything to us. It’s not about ‘how big’ and ‘how fast.’ Everything has a strategy and a structure, and we want to continue to grow as long as we can maintain the quality product and service that our customers are accustomed to,” he says.

“We are blessed to have customers who have been with us for well over 50 years, and as we go out and grow with new customers and clients, we need to make sure they’re a good fit for us, and we are a good fit for them. And when those things happen, it creates great synergies and great things can happen.”