How Tech-Driven is Your Office?
Written by Karen Hawthorne
View in Magazine
FacebookTwitterLinkedInEmail 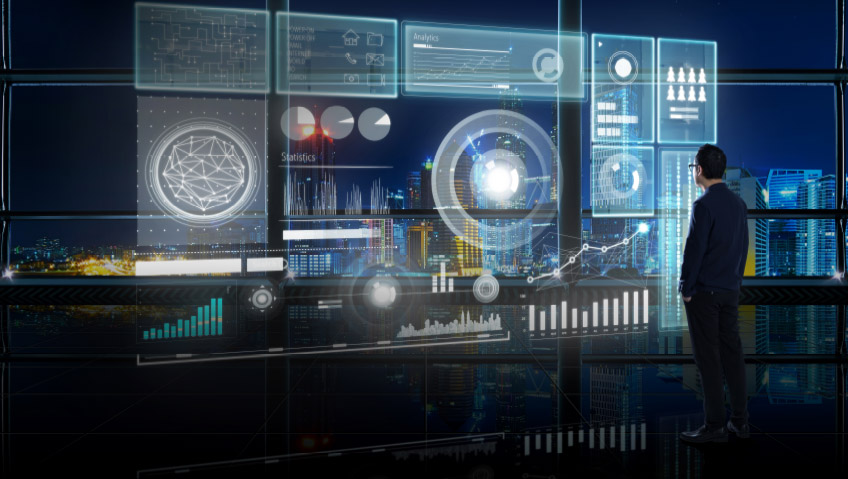 Check out any high production science fiction movie and you can always tell that it’s set in the future – not because of how people are dressed or how they talk, but because of all those futuristic features that the buildings and spacecraft have.

Whether it’s the iconic sliding doors on Star Trek, those self-darkening blinds in Tyrell corporate headquarters in Blade Runner, or the lights coming on automatically to wake people up in Prometheus, the structural features in these movies let you know that things have advanced.

The remarkable thing is that many of those fancy sci-fi features are already a reality. Push your cart through the exit of most large grocery stores and sensors trigger the doors to slide open as you move through. If you are unfortunately working late in an office tower, you can watch the lights switch off around you as the motion detectors sense an absence of activity. There are even windows that use liquid crystal to turn the glass opaque to create privacy, making the buildings that we work in more futuristic all the time.

Silicon Valley firm, View, builds next-generation glass windows that use AI and machine learning to optimize natural light, limit glare and control heat for what it says is a $1 trillion market, CNN reports. The company says that Netflix, Facebook, and FedEx use View glass in their offices.

This is really all about where the internet meets physical object. Devices are connected to the internet (usually through Wi-Fi) and can communicate with each other and their surroundings.

So why do this?

There are a number of significant advantages that come from this technology, such as enhanced efficiency and potentially stretching the lifecycle of an appliance or device by letting owners know what part needs to be replaced when. In fact, many of us are living with the Internet of Things in our homes, with refrigerators that you can have make extra ice for your dinner party or alarm clocks that use radar to monitor your breathing and movement while you sleep to help you figure out the best bedtime and wake-up time, based on your specific data. Basically, your smart alarm clock can now provide you with suggestions to help you get a better rest.

“There’s an evolution from, today we tell computers to do stuff for us, to where computers can actually do stuff for us,” said Google CEO Sundar Pichai in a 2014 interview with Farhad Manjoo. “For example, if I go and pick up my kids, it would be good for my car to be aware that my kids have entered the car and change the music to something that’s appropriate for them.”

While these intelligent gizmos make home life better, it’s the smart office buildings that really take the Internet of Things to another level. From auto-lighting to HVAC, security, data management, and green-oriented innovations, these office buildings bring together all the components needed to push how efficient buildings can be and change the way we think about the environments we work in.

The Building Efficiency Initiative notes, “At the most fundamental level, smart buildings deliver useful building services that make occupants productive at the lowest cost and environmental impact. Smart buildings use information technology during operation to connect a variety of subsystems, which typically operate independently, so that these systems can share information to optimize total building performance.”

That may be a lot to take in, but what’s at the core of these buildings is that by integrating what have been historically separate systems, the dynamics of how a building operates dramatically change.

There are many examples of different buildings that synergize the many systems and leverage the Internet of Things to create a different kind of working experience and building performance. In Charlotte, North Carolina, the Duke Energy Center is a 780-foot, 48-floor smart tower that harnesses natural resources to create major savings. The building features water-saving plumbing, a storage system that collects rainwater, treats it and uses it for about 80 percent of the building’s needs, including a condensation HVAC system that cools the building.

Up on the very top is a roof garden that uses plants to capture excess heat emitted by the building to help cool the building and mitigate carbon dioxide emissions.

In Amsterdam, Holland, the Edge building has been called the greenest, most intelligent building in the world. It doesn’t just achieve the highest ecological standards (including harnessing the energy of people who work out in the building’s gym); it knows its occupants very well.

As Bloomberg says of the Edge building capability, “It knows where you live. It knows what car you drive. It knows who you’re meeting with today and how much sugar you take in your coffee.”

Occupants connect with the building through a mobile app which acts as a concierge, guiding them to a parking spot and then their desk for the day. In this building, you don’t go back to the same old spot every day; instead you are assigned one for the day. The concept saves space and also promotes more interaction among employees within a company. Not only that, but the building will also automatically adjust temperature and lighting in your area based on the preferences you set in your app.

And while the Edge building is certainly at the cutting edge, more buildings are integrating their systems to become smarter.

There is also something to be said about efficiently getting people to where they need to be. The RBC Waterpark Place building in Toronto, Ontario has elevators without floor buttons inside them. The idea is that you select the floor you want to go to when you are in the elevator lobby, then the system points you to the elevator that will get you to that floor in the shortest time while maximizing the overall elevator system. The building’s meeting rooms also monitor the number of people in meeting rooms and adjust the temperature accordingly.

Some of the most important integrations are the ones you can’t see or feel directly. Facility Executive Magazine says in one of its case studies, “Many facility managers do not know how much water is being wasted through their buildings’ HVAC systems.”

HVAC optimization can literally mean the difference of saving vast amounts of water – for instance, up to 7,600 tons of water over the course of year for a 2.25 million square foot building. While it may not be the sexiest feature of a smart office building, a smart HVAC system is by far the greatest cash saver for a building’s infrastructure.

And while it is easy to rank cost savings as the largest return on investment in smart office buildings, there are many others that make integrating operating systems through technology so appealing. The data that is collected by building sensors on electricity use, water consumption and actual hourly use of the space by people provide insights into how to adjust the way a building’s systems can be more efficiently managed.

Having smart assets in a building also increases the overall value of the building. Again, it’s all those systems working together to reduce the rate of depreciation of the office tower itself. These buildings can also take care of themselves, alerting management well in advance of potential issues before they become real and costly ones.

The tenants of the buildings also benefit because worker and work space efficiency tend to increase. Whether it’s maximizing the office space like at the Edge building or creating comfortable meeting spaces like those at RBC Water Park place building, these smart advancements create a lot of appeal for the companies that lease space in a building.

These results are pretty hard to ignore. And, as more advances make more things possible, the lines between science fiction and workplace reality may be hard to distinguish. It seems like it will only be a matter of time before the office kitchen can instantly create the Jean-Luc Picard special: Tea, Earl Grey – hot.