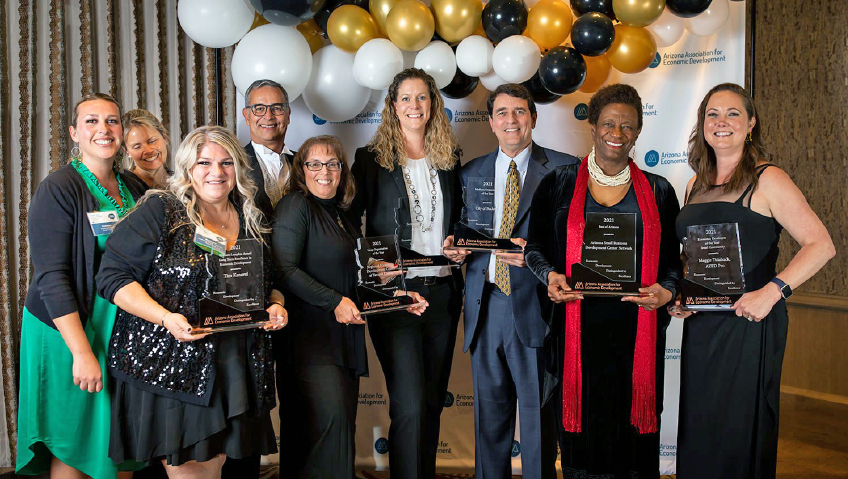 But Arizona is not resting on its laurels. As the state’s unified voice advocating for responsible economic development, AAED is still hard at work. AAED accomplishes its economic development goals through professional education, public policy, and collaboration. “Our organization is where everybody comes to play nice,” Kelly says. “We all work together, and everyone can share ideas and best practices.”

AAED’s The Academy of Arizona educates and certifies the state’s economic development professionals. “We recently just refreshed that program,” says Kelly. “It has seven courses in a variety of different topics.” Courses give an introductory overview of economic development in Arizona as well as in-depth studies in business retention and expansion, taxation, finance and incentives, entrepreneurship and small business development, marketing, and workforce development. Professionals who complete the six core courses and one elective within a three-year period will earn AZED Pro certification. Kelly also emphasizes the program is not just for economic developers. “It is important to AAED that all of our partners have a great grasp of economic development principles and how those play out in Arizona.”

The pilot garnered enthusiastic, positive feedback. “We had a group of five mentors and five mentees and they really enjoyed the program, so we’re excited to launch it on a larger scale this year. We’re hoping that helps to further develop the talents we have here in Arizona as economic developers.”

In addition to education, AAED actively advocates for the best economic development policies. “Another pillar of our organization is advocacy and we have ramped up our policy efforts,” Kelly says. “I’m a registered lobbyist and we work with Dorn Policy Group as well.”

With the support of this Arizona-based lobbying firm and their partners, AAED works at both the state and federal levels to protect and advance the state’s economic development interests. Sometimes this means thinking outside of the box. For instance, “in the last year, we spent a lot of time on advocating for the film tax credit program as well as the reauthorization of the Arizona Commission on the Arts and arts funding,” Kelly shares. “They received a historic amount of funding—$5 million! That was exciting to build up those two sectors of Arizona’s economy that people don’t necessarily think of when they think economic development. They play such a huge role in the economy of Arizona that it was important for us to advocate for those.”

AAED also successfully lobbied for transportation funding and workforce development funding this past session. “We had a lot of really wonderful success last year in the policy realm.”

In January of this year, AAED hosted the Arizona Rural Housing Symposium and is already planning a follow-up for later this year. The symposium brings together Arizona citizens, elected officials, nonprofits, developers, partners, and other stakeholders to learn about rural housing challenges and to develop solutions. “There’s been great collaboration,” Kelly says. “[There are] a variety of things that, as economic developers, we hope to develop into policy over the next couple of years to keep that focus on workforce housing and creating better communities.”

Tourism is a major industry in Arizona, and therefore another key focus for AAED, which works closely with the state’s tourism agencies and associations to support the sector. “It’s a lively sector that really drives a lot of the economies in our rural communities,” Kelly says. “That’s their bread and butter.”

Indeed, the industry managed to stay strong throughout the COVID shutdown. “What we saw through the pandemic was this pent-up need to travel, to get out and do a day trip. Rural communities around Arizona really got hit in a good way with the tourism bug that people had built up over the pandemic.”

Tourists are drawn to Arizona’s remarkable range of natural wonders, from sky islands, high mountains, and pine forests to stunning rock formations, saguaro-filled landscapes and of course, that behemoth of tourist attractions, the Grand Canyon. “You can go through three different seasons in a day in Arizona depending on where you are,” says Kelly. “There is so much variety. You can be in the mountains with the pines, you can be down with the cactuses. There is a wide range of places you can choose from in Arizona.”

This wide range of attractions is drawing a wide range of people to stay permanently. “It’s really appealing to executives [and] to workers who want to come live here,” Kelly says. “We’ve had an influx of people from the northwest and from California and a lot of different states.” These new employees are needed since an increasing number of employers are choosing to relocate to Arizona. “We’ve had a lot of new businesses come in and so [we need] to have all these workers as well.”

Focusing on the future

This includes a heightened focus on rural areas in the future. “We’ve had so much success in the state in greater Phoenix and greater Tucson and we don’t want our rural communities to be left out,” Kelly says. “We want them to be able to grow in whatever way they want to grow. So we’re really focusing on those rural communities and putting policies in place that protect them, help them attract investment. It’s going to be a priority for us in the next year.”

One growth strategy will be to build on the state’s success in the tech sector. “We’ve had such great success in the tech and innovation and entrepreneurial field,” Kelly says. The next step is “getting some of that out to the rural communities, driving some of that innovation outward from greater Phoenix and Tucson and really helping build up the rural communities in that way.”

AAED’s focus on the arts will continue to complement the focus on tourism. “Having the success that we’ve had in recognizing the arts is really bringing in the idea of the creative industries and the tourism industry as a driving force in Arizona,” Kelly explains. “Properly funding those agencies and those entities to do that work is important for the future of Arizona as well.”

And of course, education will continue to be a primary focus for AAED. The team wants to keep offering “high-quality events, high-quality educational opportunities to our members, to the general public, creating that awareness of what economic development is and what it will be in the future.” Whatever the future entails, it is sure to be positive for a state with such a wealth of opportunities and talent, bolstered by an economic development association committed to moving the state forward.