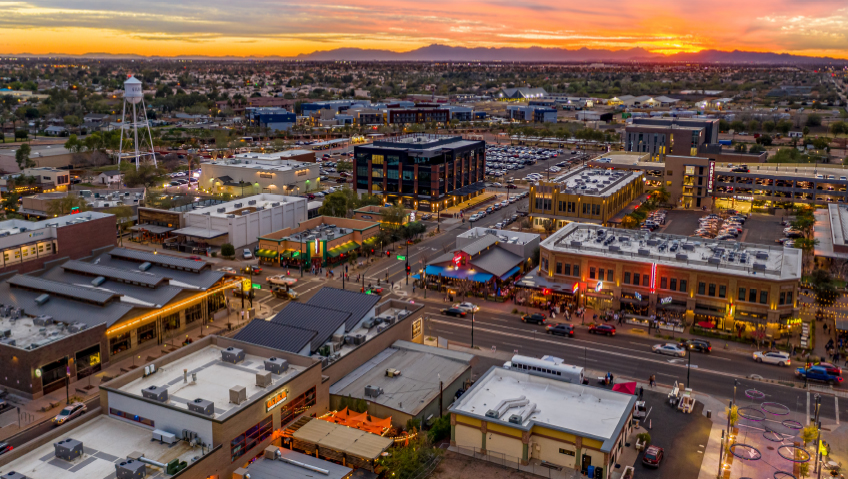 In recent years, the Town of Gilbert, Arizona has experienced explosive growth while earning an enviable reputation as a productive, low-crime community with many charms. Once a sleepy agricultural community, the booming town is now home to over 271,000 residents. Its municipal government works hard to assist companies and maintain growth through careful planning and strategic investments.

Located in the southeast part of the Phoenix Metropolitan Area, Gilbert was named the most prosperous city in America by public policy organization Economic Innovation Group in 2017 and the top city where millennials are purchasing homes by financial technology company SmartAsset in 2020. It has also been cited as the seventh-best place to raise a family in the U.S. and the tenth-safest city in America by personal finance website WalletHub.

The Town of Gilbert says that the community’s “advantageous business climate,” has helped drive economic growth. This climate is fostered by factors including low taxes; municipal and state incentives in the form of tax credits, infrastructure funding, job training, and more; expedited permitting; infrastructure investment, and a responsive local government. Warm weather, a highly-educated workforce, and a convenient location are additional attractions.

“We recently passed a $500+ million bond for infrastructure. Our infrastructure, as well as our proximity to California and Mexico, Central and South America, makes the Phoenix region an ideal location for supply-chain-focused companies,” says Dan Henderson, Director of the town’s office of economic development. “This region has an extremely competitive workforce while maintaining one of the lowest costs of labor in the nation,” he adds.

Gilbert benefits in other ways from its inclusion in the rapidly-growing Phoenix Metropolitan Area. The region has become “a destination for emerging technologies. That includes autonomous and electric vehicles, cybersecurity, medical technology, blockchain, sustainable products, and the internet of things, along with wearable technologies,” states Henderson.

The state of Arizona, meanwhile, offers “a minimalist regulatory approach, with no corporate franchise tax,” which has helped fuel “huge employment gains in the finance, technology, and manufacturing industries,” he says.

The town contains an economic opportunity zone, primed for development through federal government tax incentives and other business supports, which overlaps a booming heritage district. Since 2012, the heritage district has garnered more than $60 million in public investment and over $80 million in private investment. The area now boasts 140-plus businesses, including restaurants, retail outlets, and entertainment spots.

“Over the past ten years, our heritage district has gone through quite a renaissance. It’s been transformed into a premier entertainment and employment district,” notes Henderson.

The town government has also invested funds in other parts of town. “Gilbert is making a lot of strategic infrastructure improvements which encourage private sector investment and new development. Generally speaking, for every dollar we put into public investment like infrastructure, we expect seven dollars of commercial return to follow—a one-to-seven ratio,” he explains.

The town also has four ‘employment corridors,’ zones in which commercial development is strongly encouraged and facilitated by municipal officials. One corridor, in the northwest part of town, contains a cluster of science, technology, aerospace, and manufacturing industries. Notable employers include Lockheed Martin and Northrop Grumman.

A second corridor in the northeast touches on U.S. Route 60, a major east-west highway that provides outstanding accessibility. Healthcare companies dominate this corridor, which has recently seen $300 million in private investment. Top employers include the Banner Gateway Medical Center and the Banner MD Anderson Cancer Center.

The concentration of specialty healthcare services has stimulated growth in medical-oriented tourism, according to Henderson, as people from outside of town or state use the Town of Gilbert’s medical facilities. The influx of patients has resulted in “considerable investment in hospitality amenities, to be able to host and house families and individuals seeking services,” he adds.

A third employment corridor, based in the west-central part of the town, contains Mercy Gilbert Medical Center, one of three U.S. Delivery Centers for Deloitte, and the Footprint headquarters.

The final employment corridor is situated on Gilbert’s eastern flank, near the Phoenix-Mesa Gateway Airport. Henderson calls the airport “an economic juggernaut” that acts as a magnet for aerospace and aviation companies. These firms offer pilot training and aircraft testing, modification, and maintenance, among other services. Huge aerospace companies such as Lockheed Martin and Embraer Air have facilities at Phoenix-Mesa Gateway Airport. The area also features various retailers and hospitality businesses.

The Phoenix Sky Harbor International Airport, located a few miles outside Gilbert, is a massive transportation hub that serves several key airlines and dozens of U.S. and international cities daily. The town is close to Interstate 10, which crosses from California to Florida, and local industries also enjoy access to the Union Pacific rail line.

Economic growth has been matched by a surge in population. “We’re an amazing place to raise a family,” states Henderson, who mentions generally sunny and balmy weather, top-rated public schools, affordable healthcare options, and a low crime rate.

“Family-friendly neighborhoods, in a community that caters to people who enjoy an outdoor and active lifestyle, are among the many reasons why people are looking at Gilbert,” he says.

Gilbert also offers an excellent community college system, “one of the best in the nation,” Henderson says.

Well-educated residents abound. An estimated 44.1 percent of people (25+) in Gilbert have at least a bachelor’s degree (versus 33.1 percent across the United States). The median age is only thirty-three, and nearly a third of the residents are between the ages of twenty-five and forty-four—an ideal talent pool for growing companies.

These developments would have amazed the original inhabitants. The community came into existence in 1902, when the Arizona Eastern Railway company received permission to establish a rail siding on property owned by one William ‘Bobby’ Gilbert, giving the town its name. The town remained a farming community for decades and was known as the ‘Hay Shipping Capital of the World’ through to the late 1920s.

For decades, the population stayed small; as recently as 1970, fewer than 2,000 people were here. Then, in the 1970s, the town council annexed some county land and began to focus on growing and attracting new business. This goal was achieved; every five years between 1980 and 2000, the population doubled.

Henderson estimates that, at its present trajectory, Gilbert could reach “north of 300,000 residents,” in the near future.

Gilbert is focused on becoming the “city of the future,” and continued economic growth, particularly in healthcare, STEM-related (science, technology, engineering, and math) occupations, and local tourism, is forecasted.

“I see this community as part of a mega-region, stretching to Mexico and west to California. We can compete globally with our assets. We need to stay laser-focused to make sure Gilbert remains committed to the Greater Phoenix region. We can become greater together,” says Henderson.