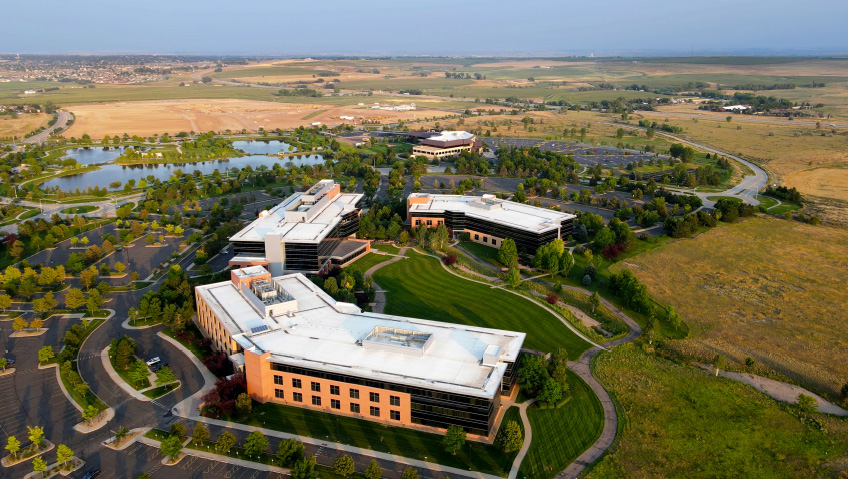 The city of Greeley, the county seat of Weld County, Colorado, has a growing population of over 110,000 people. The city has been experiencing an increase in both population and attention over the past several years, and City Director of Economic Health & Housing Benjamin Snow tells us why.

First, Greeley enjoys a high quality of life that is related to, among many other things, its community amenities that nearby urban areas do not necessarily have. These include the over forty neighborhood parks as well as recreation centers, museums, a 1700-seat performing arts civic center, outdoor arena, and more. Offerings like this bring people to the area and promote an active lifestyle within the community.

There is also an openness to diversity in both the city’s population and its industries. This, combined with its distinctive and progressive post-secondary educational institutions, plays into Greeley’s attractiveness.

Snow also feels Greeley’s open areas and proximity to the mountains draw people to the Colorado lifestyle. He says that, despite the city’s growth in the past decade-plus, there is still plenty of land and water for additional growth. With the population expected to double to over 200,000 people by 2050, the city wants to take the economic energy from that growth and strategically channel it into both the community and partners in development.

City Manager Raymond Lee III adds that Greeley identifies as a burgeoning community. “My vision is to ensure I help Greeley grow with purpose and intention. With an annual growth rate of nearly two percent each year, I understand the need to plan, design and support a growing city from all angles from housing and infrastructure to industry and culture.”

Beyond its quality-of-life enhancements, Greeley has established strong momentum with several recent large projects downtown. For example, a new, multi-family, three-building project known as ‘The Maddie’ represents a $50 million investment, with 221 high-end residential units and street front retail. Other projects currently under development include the 55+ Resort—an 85 room, $24 million high-end luxury residential project opening later this year—and a $33 million new downtown Library and Innovation Center (LINC) currently under construction. In total, over $200 million of capital investment has been made from both private and public sectors in downtown Greeley over the past eight years.

Deputy City Manager / Community Development Director Becky Safarik notes that the city adopted a downtown master plan in 2011 that charted the course for many of these successful developments, and its future will include renewing these plans. The city recently launched a refreshed master plan for the downtown area that will chart a course for the next 10 years.

At the same time investments are being made downtown, several large-scale master planned communities are now under development on greenfield sites on the western edge of the city. The exciting changes exemplify “the powerful story of what Greeley is all about,” according to Snow. He mentions a similar mirroring of economic activities with employers on the western edge to those in the east, maintaining a healthy employment balance throughout the city.

In terms of quality-of-life improvements, Safarik mentions a significant open-space acquisition on the northwest edge of town known as the Shurview Property, which is adjacent to the Cache la Poudre River and the twenty-one-mile recreational trail that stretches to Windsor, Fort Collins and beyond. The property is described by Safarik as historically significant, as it surrounds a former Cold War missile silo site and prisoner of war camp from World War II. It also sports a beautiful vista of the Rocky Mountains clearly visible from Greeley, and this space has helped define the community’s edges. Safarik, Snow, and other city leaders envision it as a signature amenity for the community for years to come.

Snow is particularly excited about the innovation happening within the city’s legacy industries, specifically in the food and agricultural technology sector. Companies like Vantage Hemp, a pharmaceutical-grade cannabidiol (CBD) producer, have moved to Greeley and invested millions of dollars into making the city their home base. Vantage has recently invested $40 million in a two-building campus within the Highpointe Business Park, adding to the many other manufacturing, office, and distribution companies located there. The company will soon be unveiling a food-grade, CBD-based, pharmaceutical product which has already attracted global customers.

Greeley also helped to establish a plant for Leprino Foods, a premier cheese manufacturing company and world’s largest producer of mozzarella cheese, based in Denver that offers state-of-the-art technology in its manufacturing processes. The company has undergone five expansions since first opening in 2010. Food-grade manufacturing companies continue to realize the benefits of locating in Greeley.

New and burgeoning sectors represent a lot of excitement and opportunity for the city, but it remains committed to its legacy industries. Education is one of the city’s top six industry sectors, along with agribusiness / food, energy and power, healthcare, professional services, and construction.

One of the city’s most important education relationships is with the University of Northern Colorado (UNC). Greeley enjoys a distinct university district, which focuses discussions between UNC partners and neighborhood businesses so that the city and university stay engaged and continue to support mutual success. The city is involved with UNC’s annual entrepreneurial challenge and has hosted UNC Innovation Talks to encourage a strong business mindset.

UNC recently gained approval from the State of Colorado to expand the university’s program to include an osteopathic medical school. Snow sees this as a bold venture currently in the site selection phase that will require $150 million of new investment. Greeley is also exploring other opportunities for synergy with its legacy hospital, Northern Colorado Medical Center (NCMC / Banner Health).

As the city already has a strong relationship with UNC’s nursing program, it will emphasize the triangle created by connecting downtown with the hospital and university—effectively leveraging the convergence of medicine and education, two of Greeley’s higher-performing sectors.

The city also benefits from another educational partner, Aims Community College, which recently completed construction on a new $60 million welcome center, including technical upgrades, new seating, conference facilities, and more. Work is being done constantly to help connect students, especially in high school and beyond, with the benefits and opportunities provided by local businesses.

Going forward, Greeley will be examining a range of opportunities for supporting the city’s expected growth. “As the market shifts, we want to be both creative and responsible in how we regulate,” says Safarik. A housing needs assessment is currently underway in the city that will include a pilot program for micro-housing projects. Another project called Hope Springs, a joint venture between local developer Richmark Companies and Habitat for Humanity of Weld County, recently partnered with the City to win a grant for $1 million to help build a subdivision of paired housing and, in turn, create another workforce housing opportunity.

From a better process standpoint, the city uses technology to support its business customers. Safarik says that a cutting-edge system to access and process applications makes it easy for businesses to access Greeley’s building permit and development review systems on a 24-hour basis.

Greeley also recently went through an exercise with its city council in planning for the future to sustain growth and quality of life; as Safarik describes, there is a desire to support complete neighborhoods and plans that will help areas blossom with the continued development of Greeley. She references the city’s tremendous portfolio of water resources, and its leadership in promotion of sustainable landscapes, an effort on which the City expects to partner with the State in the years ahead.

Building a community with sustainability in mind is the larger philosophy of Greeley. This gets translated into strategic transportation, utility and land use planning to create an environment where people are living and working in close proximity. A robust local workforce will limit the need for commuting and add to the lifestyle enjoyed by Greeley’s residents and businesses.

Snow also highlights a city-sponsored single family down payment assistance program launched several years ago to drive homeownership closer to employment centers in the city, particularly in the eastern part of the community. “There’s no reason people need to travel long distances to work, and we have an opportunity to make a difference for them,” he says of the program.

Lee says Greeley is preparing to successfully manage the needs and expectations of a major city as the future unfolds. “It’s a constant balancing act between future casting and building for the next 10, 20, 30 years and beyond and ensuring that our resources and services today are advantageous to the community.”