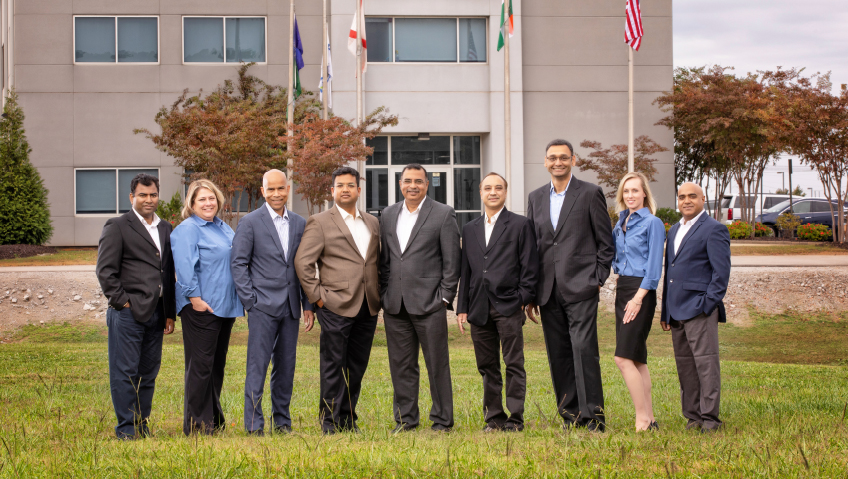 Profiled previously in the December 2020 issue of Business in Focus, the company retains a progressive outlook, with a strong commitment to sustainability and what it calls “lean innovation.”

Given global supply chain woes caused by COVID, Polyplex USA is currently looking to enhance its reputation as a reliable, domestic source of high-quality PET film. As such, it is massively boosting capacity.

“Our current capacity here is seventy million pounds of PET films in the US. In next calendar year—2023—we are adding another 110 million pounds of capacity. So, our total capacity will be 180 million pounds. All dedicated to growing our market share in North America,” states Polyplex USA Vice President of Sales and Marketing Manav Singh.

As he recounts, the COVID crisis initially caused a surge in demand. Restaurants were closed and more people were eating at home, which increased the creation of packaged food, which, in turn, increased the need for PET film. Packaged pet food sales also soared, as homeowners faced with shuttered workplaces and entertainment / recreation venues, started acquiring dogs and cats to cope with feelings of isolation.

With the pandemic hopefully receding, the COVID-related surge for PET film has largely subsided. However, says Singh, the situation surrounding the virus imparted a valuable message to North American manufacturers: namely, do not rely on distant vendors for supplies.

“Customers are looking for a domestic source for their product. COVID has taught us that you might have multiple suppliers, but the closer your suppliers are to you, the better it is. Supplier assurance has become a priority for everyone.”

Polyplex USA hopes to boost its share of the U.S. polyester film market from roughly fifteen to twenty-three percent in under five years. A lofty goal, but entirely reachable, says the company, in part because it can offer speedy delivery compared to offshore PET suppliers. Imports from the latter can take between eight to twelve weeks to reach the client, according to Singh.

“The sentiment of ‘Made in USA’ is very strong and getting stronger as we speak. Coupled with a quick turnaround—our customer is able to get [PET film] in three weeks, four weeks, at a competitive price point—we expect to take away a significant portion of the import share. That is the whole rationale for adding capacity,” he states.

In addition to being a domestic supplier, Polyplex USA has another edge. Unlike many of its competitors, it creates its own resin, using an in-house polymerization process. Developing resin in-house gives the company more control over quality and consistency, lowers costs, and “accelerates our speed of innovation because we are not dependent on outside parties to provide us with different resin formulations. Since everything is done in-house, we are able to churn out newer products faster than our competitors at a much lower cost,” Singh explains.

Polyplex USA also has metallizing chambers which it uses to transform base film into higher-value products. The company is undergoing a massive transformation of its own, with new buildings going up at Polyplex USA’s forty-two-acre Decatur base. Once construction is complete, it plans to hire one hundred additional employees, bringing total personnel numbers to 280. It also maintains “more than fifty stocking points,”—third-party warehouses and other locales—across North America, he says.

The company’s four main product categories are Sarafil, Saracote, Saralam, and Saraprint. Sarafil is a base polyester film product used for packaging and industrial applications. When a silicon coating is applied to Sarafil, it is sold under the brand name Saracote. Saralam is developed by taking base film and applying extrusion coating, while Saraprint is base film with additional various coatings and is used in the graphics sector.

The company also continues to focus on thin film over thicker film. “The market for thick PET film is one-fourth of the total market size. So, three-fourths of the market is thin film. Naturally, we are doing more thin films than thick films,” says Singh.

Flexible packaging represents about seventy percent of Polyplex USA’s market, with the remainder consisting of industrial applications. The company wants to move into shrink PET film, traditionally used for consumer goods such as beverages and detergent. This is a sector in which it does not have a presence right now.

Polyplex USA remains dedicated to sustainability. The field of plastics, notes Singh, does not have the best reputation among environmentally conscious people. This is ironic, given that glass and aluminum require bigger carbon footprints to produce, and the former is more likely to break than plastic. Regardless, Polyplex USA has embraced a variety of ‘green’ initiatives, including an emphasis on recycling and reduction. The firm grinds up plastic bottles, cleans the resulting particles, and then places them in a reactor and applies a chemical recycling process. The ensuing post-consumer recycled material (PCR) can be used to create new products.

“We have leveraged our capabilities in a manner that we are sourcing PET bottle flakes, doing chemical recycling, to make PCR resin, to then extrude that into films,” he says. “We are doing that in Thailand and bringing the PCR resin to the US and making the films here.”

It offers products that feature up to ninety percent PCR content. “We’ve been able to demonstrate we can replace all our existing products with a PCR version, at a very nominal premium,” he continues. “We are already selling PCR films in different applications, such as label liners and pet food laminate.”

Reduction simply means using less PET film. Instead of using forty-eight gauge PET film, the firm might use 44 gauge with no impact on quality. Polyplex USA re-uses secondary packaging such as paper cores and wooden pallets and has energy-efficient lighting in its facilities as well.

The company prides itself on being a forward-thinking, solutions-oriented company. It practices “lean innovation,” based around a “hub and spoke model,” to generate new ideas, Singh says. This model relies on input from all Polyplex offices. The parent company has operations around the world, including India, Indonesia, Thailand and Turkey, as well as Decatur.

“The nucleus of innovation is based out of our corporate office in India, where we have a dedicated team of PhD doctors who specialize in domains like polymer extrusion, coating technologies, coating chemistries, nanotechnology, sustainability,” explains Singh. “Across all global locations, we have dedicated sales teams. In each location, we have service teams as well. These are the people who closely work with the sales team, filtering out ideas for innovation. Those ideas come out of customer engagement initiatives. We do technical seminars with customers where we showcase our capabilities. Then we put together a list of products which require a tweak or a completely new innovation.”

Lists are forwarded to a corporate research and development department which gleans a few priority items on which to focus. In this manner, new products are created and existing products improved. Since the last profile, Polyplex has developed roughly one hundred new products. Going forward, it will be stressing its new thermoformable PET films among other cutting edge products. Thermoformable refers to materials that can be shaped by pressure and heat.

“We developed thermoformable PET film because there was a customer demand coming from the meat, dairy, cheese, confectionary segments, and medical pharma. Polyester is easy to process, easy to print, and that’s why our thermoformable films are providing a better value to a lot of our customers,” says Singh.

Polyplex USA is also doing something new when it comes to marketing. In the past, the organization preferred to “let our products speak for themselves,” and relied on word-of-mouth and personal sales efforts to boost visibility. Now that it is massively ramping up capacity, it has become more proactive on the promotional front. It now routinely sends product awareness emails to clients, has increased its social media engagement, and regularly participates in trade shows. These were mostly closed during COVID or held online but have now resumed and are open to the public.

As for the future, while boosting its existing presence, Polyplex wants to continue creating new products and exploring new markets. “Shrink PET is one segment where we will be growing phenomenally,” Singh states.

“I think it’s an important goal just to increase market share. Now, we have access to a lot of new products and new capacity. We are back on the road as salespeople. It’s important to really start hitting the targets, giving assurance to customers who kind of moved away from us because of limited capacity and disruption in the supply chain, bring them back into our fold, and make sure there is a smooth transition to the new capacity we have,” he says.