Brewing Up New Customers and Products 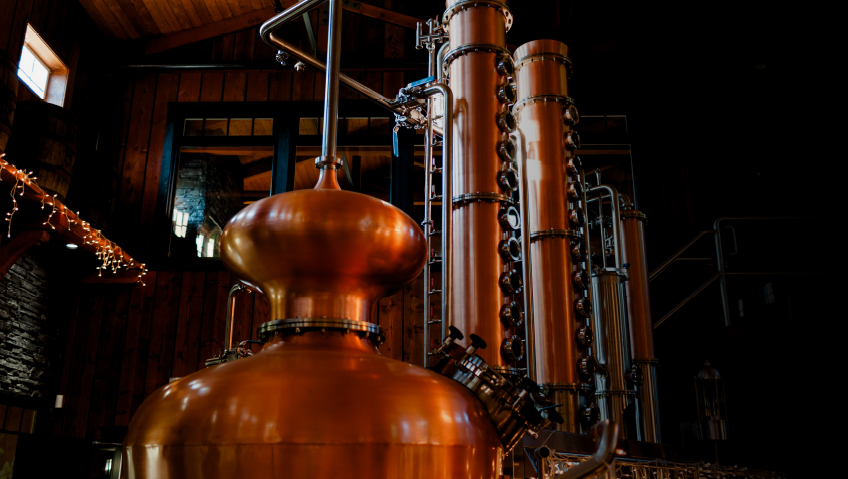 Specific Mechanical Systems is at a turning point. The Victoria, British Columbia-based firm specializes in the design, manufacture, and installation of brewing and distilling equipment for alcoholic beverages.

When profiled in April 2018 for Manufacturing in Focus, the company was primarily focused on the craft beverage sector. Since then, Specific Mechanical has expanded its presence in food production, introduced new products, and added large-scale commercial clients. The company’s current goal is to continue growing without losing its commitment to artisanship and quality.

It also makes equipment for non-food sectors, including wastewater treatment, the oil and gas industry, and even the cosmetics and makeup industry where its systems are used for extracting essential oils from plant matter. However, “We’ve really focused our work in food and beverage,” says General Manager Reo Phillips. “There’s been a big uptake in being self-sufficient within North America, with our food production, our food sources, and our food supply… We are doing a lot of work manufacturing equipment for general food production… whether juices, sauces, or soups for consumer consumption, or systems for pet food production.”

New products include a beverage canning machine and a system for continuously distilling spirits. New clients, meanwhile, include “some of the larger, well-known vodka, whisky, and rum distilling companies in the world,” he continues.

Phillips makes clear that the company has not abandoned its roots. Even as Specific Mechanical ventures into large-scale equipment manufacture for larger corporate clients, the company continues to develop solutions for craft brewers and distillers. Regardless of size and scale, all products are designed with an artisan’s touch.

“Pretty much everything we do is somewhat custom-made. We follow basic first principles and design concepts, as well as food processing regulations and procedures, but at the end of the day, every single food and beverage producing facility out there has their own unique requirements,” he notes.

He draws a comparison to custom-designed kitchens. While all kitchens share common elements such as cupboards, stoves, fridges, and countertops, each custom kitchen has a specific configuration and appearance. The same can be said for systems built by Specific Mechanical.

The company produces fully automated brewing systems, including brewing equipment that can accommodate production of greater than 100 barrels of beer. Distilling equipment includes copper and stainless steel, or hybrid pots that can accommodate anywhere from 500 litres to greater than 10,000 litres of distilling wash. Industrial products range from stainless-steel tanks to pressure and food-processing vessels, wastewater treatment tanks, and more. In addition to designing and building these items, the firm will install its systems anywhere in North America. Specific Mechanical has also sold and shipped products to clients in Europe, Asia, Australia, New Zealand, and Central America as well.

Its new continuous column system allows for the uninterrupted distillation of spirits whereas bourbon, whisky, and vodka, have traditionally been distilled in batches. “It might take five to ten hours to generate a batch of distilled spirits, which you are then going to age and bottle. Only when one batch is done can you start another batch,” he says.

The continuous column distilling system from Specific Mechanical offers an alternative to this stop-and-start process. Fermented wash or mash is fed into the system and, “instead of being limited to running four, five, ten hours then starting an entire new batch, an operator continually runs the column as long as is needed, producing far greater output than the traditional pot still systems,” states Phillips.

Specific Mechanical has also developed a unique canning machine. Built for the craft distilling and beverage markets, this machine will be used to can nearly any liquid, including beer, RTDs, wine, juice, and other liquid refreshments.

“It’s designed for the thirty cans per minute market with future models supporting up to 120 cans per minute in the roadmap. It can accommodate any can size… Within ten minutes, it can [be readjusted] to support other can sizes. So, if you’re running one product line which uses a standard 355 ml can but then you want to run another product which uses a different can style, you can change over and use the same machine. Up to this point, you would typically have to either buy separate machines or undertake a major changeover for each can style,” he points out.

The canning machine was unveiled this spring at the CBC Craft Brewing Conference in Minneapolis. It is currently being beta-tested in the brewery environment. “Our plan is to have that beta testing completed by the end of summer and be ready to ship units in the fall,” says Phillips.

On top of these new products, the company is “always making enhancements” to existing equipment, he adds. “We have a research and engineering department that is consistently coming up with new ways of doing things. Enhancing the efficiency of our equipment is really the big push right now. If you can make equipment that’s more efficient for the end-user, even if only two, three, five percent more efficient, that will have a large impact on production throughput.”

The company’s core products are proprietary, and all engineering, design, manufacturing, and fabrication are done in-house. Specific Mechanical operates a 50,000-square-foot facility in Victoria and a roughly 20,000-square-foot space in the state of Nevada. Discussions are also underway regarding further expansions.

“It’s something we’re looking at right now. Because we’re on the West Coast, we ship a lot of our equipment to the East Coast and south of the border into the United States. We’re in the process of looking for an East Coast facility as well as a Southeast facility in the U.S.,” says Phillips.

Given that the company’s equipment is used to make products for consumer consumption, quality standards are extremely high. Among other industry benchmarks, the company has certification from UL, Underwriters Laboratories of Canada (ULC) and Occupational Safety Standards of Excellence (OSSE)—a health and safety management program for British Columbia-based manufacturers. The firm’s pressure vessel design and manufacturing shop has American Society of Mechanical Engineers (ASME) certification as well.

The advent of COVID initially had a massive impact on Specific Mechanical Systems. The pandemic shuttered most bars, restaurants, clubs, and sporting venues. Early on this proved devastating to brewers and distillers that produce alcoholic beverages for such places. Thanks to the near-closure of the hospitality industry, at the time many orders for brewing and distilling equipment were put on hold.

The result was “a very, very immediate slowdown in our business,” he recalls. “We saw nearly our entire book of orders put on hold or delayed by our customers.”

Despite this unexpected calamity, Specific Mechanical was determined to retain its staff while keeping workers safe. Employees were given new assignments and job-sharing was implemented, along with daily health and temperature checks, masks, and social distancing. Dividers were put up in workspaces to enforce a two-meter distancing policy for staff.

COVID also threw the company a curve ball in terms of promotional activity. Traditionally, trade shows represented “a big part of how we present ourselves in the industry,” notes Phillips. When the pandemic closed most in-person industry events, Specific Mechanical Systems enhanced its online and trade magazine marketing efforts.

There was a silver lining to the COVID crisis; faced with unexpected downtime, the company decided to double down on research and development. During the lull brought about by the virus, the company developed its continuous column system and beverage canning machine.

Now that the impact of COVID is receding and the hospitality industry is returning to life, business is on the upswing. The company employs between 80 to 85 staff, roughly the same number of personnel as reported in April 2018. To join, it helps to have some engineering, fabrication, or manufacturing experience, although the company primarily wants people with “the right attitude, the right work ethic, and the right drive… even if they don’t have the exact skill set, we know that for the right person, those skills can be taught,” he notes.

“As we move into the commercial-scale food and beverage processing systems… we need more space to build these larger systems… The other immediate challenge we have, that everyone is having currently, is just finding staff resources. The job market in both of our locations in Victoria as well as the Nevada location is very, very tight, especially for skilled trades,” explains Phillips.

That said, the company is dreaming big. “Ultimately, our overriding goal is to become the leading supplier of craft and commercial-scale food and beverage processing equipment in North America. We see a path to being able to accomplish that. We expect in five years to have continued to significantly expand, with facilities throughout the U.S. and Canada,” he states.