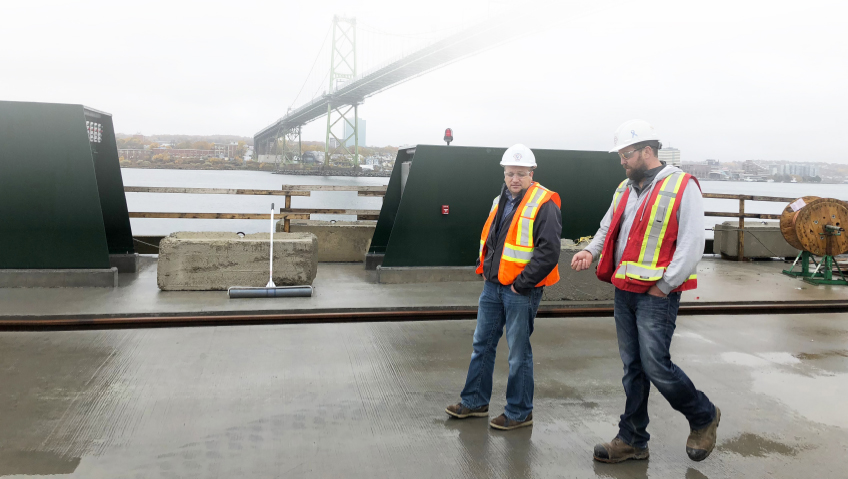 Electrical and mechanical contractor Gil-Son Construction of Halifax, Nova Scotia began operations in 1986 as a small general contractor specializing in interior fit-ups. Its original owners exited the company in 2012, with a set of new owners wanting to continue operations. The current Owner and President Daniel Hiltz took part ownership in the company in 2014, and aimed to change the direction of Gil-Son’s trajectory.

With a background in the Electrical industry, Dan completely restructured the company into a great success. It now boasts up to three hundred employees with around four hundred active projects with a boom in business over the past near-decade. “Everything was built to the new way of business,” he explains; new policies and procedures had to be put in place to meet new company standards.

Under Dan’s direction, Gil-Son restructured as a full Electrical contractor before evolving to add Mechanical services like heating, ventilation, air conditioning, and refrigeration (HVAC-R). Gil-Son also offers Sheet Metal and Welding fabrication, at its current location. Gil-Son can handle any part of construction services, from Electrical to Mechanical and beyond.

Dan is quick to tout the efforts of many past and present employees who helped the company become an industry leader. This includes his wife Melissa and his father, Don Hiltz, who Dan names as being instrumental in every aspect of the business.

Dan is proud of the family atmosphere that the company now has, adding that his goal is to create an environment in which people can grow and succeed, a place that everyone can be proud of. “We pride ourselves on trying to make everyone feel like they’re a part of a family, not just a corporate number,” he shares.

The company wants to stand out from its competition in all respects, and its low turnover rate combined with employee enthusiasm is one way that it has distinguished itself from its competition. Internally, Gil-Son operates under an open-door policy at all levels, and this is encouraged even for new hires. Dan says that he and upper management also try to keep employees apprised of the company’s financial situation and are open about new projects while encouraging input from all levels.

It is important that employees, in his words, “are part of the machine and that they understand where the machine is heading.” This family atmosphere extends outward to its local Atlantic Canada community, wherein Gil-Son regularly contributes to many local charities and causes such as Children’s Wish and local minor sports.

This firm focus on fostering strong and healthy links with both employees and the community is also exemplified in the way that Gil-Son approaches its customers. Dan affirms that much of the company’s dealings with clients are relationship-based and that it prides itself on developing long-term connections with its customers. “We try to stay in constant contact with past and present customers to keep relationships strong,” Dan says, and this includes keeping tabs on clients even outside of the parameters of a job or contract.

He admits that Atlantic Canada has a unique way of doing business that differs from other parts of Canada; as the market is limited by smaller communities, a company like Gil-Son must work to build trust with each client to be successful. The relationship-based model is all too important in finding new business as well as keeping clients on board, but with such an approach woven into multiple facets of the company, it has become second nature.

Dan is positive about the state of the construction industry in the Atlantic provinces, seeing no end to its operations or government investment in the region. A popular perception has been that the Atlantic provinces handled the pandemic well with health and safety measures. According to Dan, this, in turn, enticed more people to move to the area, and as such, more living and working spaces will be needed as the population grows. To meet this demand, construction will likely keep compounding year on year for now, as evidenced by the sheer amount of construction work visible in the company’s home of Halifax today.

As with many areas globally, obtaining materials continues to be a challenge due to global supply chain problems, meaning that construction costs more. As well, though work is abundant in areas like Atlantic Canada, construction is generally still seeing a labour shortage. Gil-Son, however, has positioned itself well in the construction industry and is fortunate to have secured and retained great employees throughout the years.

Dan believes the business is up to the challenge of these ongoing situations if it keeps clients aware of the rising costs. All involved must adapt and concede to market conditions that will likely become the new norm, and Gil-Son has adjusted to do so. “Companies need to be a lot more flexible with long-term business models to adapt to modern realities,” he comments, underscoring the ability of the company to do just that.

Now operating with seventy vehicles on the ground between Nova Scotia and New Brunswick, the company has come quite far and plans to stake its claim even farther in the coming years. It will be constantly looking to strengthen its existing client relationships with the approach that has won it respect in the past eight years. There are many large clients in the Atlantic Canada region that will enable expansion, which will allow the company to be at the forefront of its area and industry and meet its goals.

Dan reveals that the company will be looking to expand regionally into new areas, such as further into New Brunswick and even into nearby Prince Edward Island. “We want to follow the opportunities as we grow and expand,” while making sure not to grow beyond a manageable size, he says. It continues to examine other options very closely. With a surge in local construction still swelling, Gil-Son Construction will be keeping busy for the foreseeable future. With the help of his newly restructured management team, Dan is convinced that Gil-Son will continue to grow and expand for years to come.