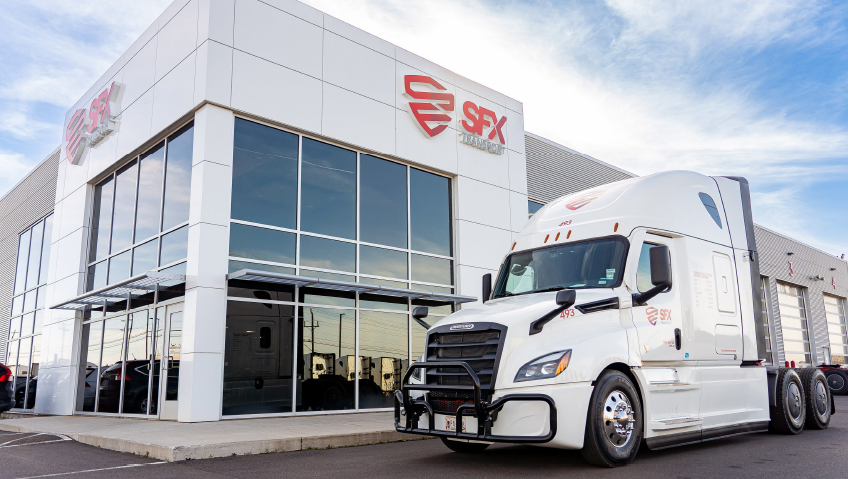 “Our specialty over the years, historically, has been hauling seafood. As we’ve grown, as the industry’s changed and the market’s changed, what we haul has also changed very significantly. We’re not primarily hauling seafood anymore,” states Andy Keith, President & CEO of SFX Transport, which is headquartered in Charlottetown, Prince Edward Island.

At present, the company handles temperature-controlled freight consisting of “mostly fresh and frozen food products—the stuff you’d find in the grocery stores. We do also have a regular run with one of our customers for medical supplies. We haul beverages, a lot of stuff for fast food and coffee chains,” Keith continues.

One thing that has not changed since we last spoke is the company’s focus. SFX Transport still offers cross-border refrigerated truck transport, as well as intermodal / container services and brokerage duties. Most goods are sent off on long-haul journeys, primarily between the United States and Canada.

“We do have some moves from New Brunswick to PEI, but those would be local deliveries. The majority of it is long-haul for sure,” he says.

SFX Transport has boosted the amount of long-haul work it does in Canada in response to COVID-related visa hassles and vaccine mandates as well as to “spread our wings a little bit,” as Keith puts it. When the pandemic arrived, the Canadian and U.S. governments imposed regulations prohibiting unvaccinated truckers from entering their respective countries.

“When COVID hit and the vaccine mandates hit, we did what we could to keep some drivers employed. If they didn’t feel comfortable or for whatever reason they didn’t want to get their vaccine, we did everything we could to keep them busy in Canada because they couldn’t cross the border,” he recalls.

The company also took steps to keep its workforce safe during the pandemic. Some office staff worked at home, while drivers were given facemasks, rubber gloves, hand sanitizer, and food and snacks to take on the road with them. Maintenance crews were given personal protective equipment and the head office was redesigned, with desks spaced apart and Plexiglas barriers installed.

COVID also caused bureaucratic delays. SFX Transport employs many new immigrant drivers, who found it increasingly difficult to get visas allowing them to work in the U.S., or even arrive in Canada to start their new job.

“For a lot of our immigrant drivers to get their U.S. visas, appointment times used to be [about a month]. Now it’s six months, seven months, eight months, so, we had to bring those drivers in, work them locally and within Canada. Once they get their U.S. visa, then they can work as the long-haul U.S. driver they were hired as,” says Keith.

Despite these headaches, the company has plenty to celebrate, including the fact it marked its forty-fifth anniversary this year. Founded in 1977, the firm was acquired by Bill Keith—Andy’s father—in 1986. Andy took the reins on New Year’s Day, 2020 as owner.

“I know my father has worked very hard over the years. Since I’ve come on board, the industry has changed quite a bit. Right now, I believe the only way to succeed is to continue to grow… There are a lot of smaller carriers and fleets that you see that are either shutting down or getting bought out by larger companies,” he notes.

Small fleets face various pressures, including rising insurance, fuel costs and supply chain delays. If a company only has a handful of trucks and one is off the road for weeks at a time because it cannot get a replacement part that creates a huge hit to the bottom line.

“For the last five to seven years, we’ve worked really hard going after consistent volume throughout the year. We still haul potatoes when the season’s on, but we have other stuff to do when the season’s not on,” he says.

SFX Transport currently operates ninety-five trucks—most of which it owns. Over the years the company has started to lease trucks as well. It is consistently examining ways to grow its fleet.

“Instead of owning everything, we’re looking at lease options. We’re open to different ways of obtaining vehicles so we can continue to grow. Hopefully, by the end of 2023, we’re up to over one hundred trucks. That’s our goal for the year,” Keith states.

If previous experience is anything to go by, SFX Transport will deck out any new trucks it acquires with the latest technology tools including dash-mounted cameras for driver safety, GPS / messaging units, sensors, and remote monitoring systems. Similarly, the head office uses cutting-edge operating software programs to streamline dispatching, invoicing, accounting, repairs, and maintenance, while keeping on top of safety and customer lists. The company is also fastidious about keeping its trucks and trailers in perfect working order.

“Anything you can put in a truck to maximize safety, productivity, efficiency, and driver comfort levels, we’ve kind of already done it. We do whatever we can to make sure the driver is as safe as possible and as comfortable as possible,” Keith affirms.

The same level of care and concern is evident in its enthusiastic embrace of health and wellness, contrary to stereotypes about long-haul truckers consuming nothing but caffeine, soda, and greasy meals at truck stop diners. SFX Transport is a strong advocate for wellness; drivers are encouraged to make nutritious meals in advance and bring them on the road, instead of eating at fast-food outlets.

Company trucks are stocked with fridges, and drivers can plug in microwaves and hotplates in the vehicle to cook. Exercise is encouraged, and this might entail bringing weights along on the road for a quick workout at a truck stop or just walking around the rig a few times. The company also publishes a newsletter with health tips for employees.

The office has an onsite gym, with separate shower and locker facilities for male and female staff members. The company is also thinking about partnering with a local supplier who sells “pre-made health-conscious meals,” says Keith. One idea being kicked around is to stock a company fridge with a weekly supply of these meals, which staff can take in lieu of their favourite fast food.

SFX Transport also encourages staff socializing and hosts regular events with employees like “going for some appetizers with the staff or bowling. We do a golf event in the summer. This and that. Just to get outside and get some fresh air and some camaraderie. We’re always looking at new things to do.”

At present, the company “is probably a little over-staffed, but there’s reasons for it,” states Keith.

Across North America, traditional industries are facing a demographic crunch. Existing workers are approaching retirement age, and there seems to be a lack of young people entering blue-collar professions to replace them. SFX Transport faces an aging workforce: “not just truck drivers, but mechanics and office staff as well,” he says.

To head off such issues, the company is “hiring a lot of young apprentice mechanics to work with our senior staff and go through their schooling… When senior staff are ready to retire in five years’ time, we will have a young, trained, and committed mechanic to take their place. If we help them through school and invest in their time, they’re going to be hopefully loyal to us,” he explains.

The company also maintains a lively social media presence to attract young workers, the theory being this demographic “is more inclined to be on social media.”

As a member of the executive of the Atlantic Provinces Trucking Association (APTA), Keith is heavily involved in broader efforts to bring younger people into the trucking fold. Part of this effort involves educating young people about opportunities in the sector, not just as drivers or dispatchers, but as data analysts, IT consultants, and office accounting and finance staff.

Trucking “is not really what you would call a sexy industry, but for something that is so simple as getting product from Point A to Point B, there’s so much involved behind the scenes that not a lot of people realize. It’s really exciting; it’s fast-paced; it changes a lot—every hour is different than the last it seems,” he admits.

As for the next few years, Keith says, “We’re looking at some expansion, probably here in Charlottetown. We need more office space, so we’re going to probably build a separate maintenance facility onsite and expand our office space. Within five years, we could have a different terminal somewhere else—whether that’s in New Brunswick, Ontario, Quebec, I don’t know. Whatever we need to continue to grow and continue to be successful, we’re going to look at it.”