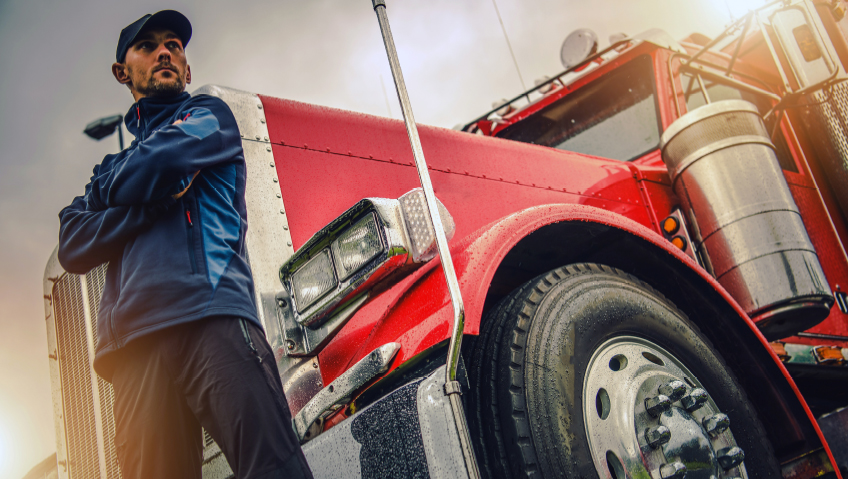 Specializing in time-sensitive short and mid-range loads—often operating within a 500-mile radius of one of the company’s terminals—Usher Transport makes routine deliveries of oil, aviation fuels, petroleum, chemicals, and hazardous waste to customers on the West Coast of the United States and Canada.

A family-owned and operated business for the past four generations, Usher Transport was founded on integrity and respect for customers and staff alike.

Back in 1946, Harlan L. Usher purchased half a dozen trucks from a Mr. Putnam in a handshake deal. Joining forces with a man named Boyd, he founded Boyd & Usher Transport. Initially transporting gasoline in the Mayfield, Kentucky area, the company kept growing and attracting new customers. By 1960, Harlan and his son, Bill Usher Sr., bought out Boyd, renaming the company Usher Transport.

“My father was a very principled man with integrity and a lot of pride,” remembers Bill Usher Sr. as posted on the company’s website. “Only three things upset him. Disrespect, lying, and stealing—in that order,” adding that the principles of integrity—respect, fairness, and pride—“have been passed down through the generations and are at the core of our business.”

After all these years, the company operates under the Usher family name and fiercely upholds its long-held values.

At Usher Transport, Inc., providing clients with safe, dependable, on-time, and on-budget service starts with rigorous and professional planning born from decades of experience. Petroleum and chemical companies, such as Exxon Mobil, Chevron, Westlake Chemical, and many others depend on the team at Usher for their liquid bulk transportation.

Hauling dangerous chemicals like sulfuric acid—vital to manufacturing everything from pulp and paper to pharmaceuticals and fertilizer—is no easy feat. It requires not only knowledge of local, state, and federal regulations, including the Department of Transportation (DOT) and others, but specialized truck trailers, able to contain thousands of gallons of corrosive liquid.

Over the years, Usher has constantly received accolades from customers and peers in the transportation industry.

In 2019, the company was the recipient of the Kentucky Trucking Association (KTA) Safety Award in the Tank Truck Division. This year, Usher received additional awards at the KTA’s Annual Conference, held in French Lick, Indiana. The company took the Grand Award for best overall highway safety record in Kentucky after it placed first (tank truck division) in the competitive safety contest, and nabbed second place in the KTA industrial safety contest.

“The Grand Award is the association’s most prestigious award and is given to the carrier who has the best overall safety record in the state,” said Usher in his message to his company. “These awards are in recognition of your dedication to highway safety. Having an excellent safety program does not win awards, the daily execution by company and drivers and contractors does.

“Today, I commend each of you for a job well done. Your efforts set Usher Transport, Inc. apart from other carriers and serve as a testament to your professionalism.”

Fostering a family atmosphere, Usher Transport hires the best and believes in recognizing outstanding work and dedication. This includes announcing Owner Operator Eric Marshall as Driver of the Year late last year. According to the company, the recognition, which included a monetary award and a commemorative plaque, was presented for Marshall’s tireless service and exceptional dedication as a professional truck driver. And in January, Christine Estes, the company’s Transport Safety and Recruiting Manager, was recognized as Employee of the Year for going above and beyond her responsibilities.

As a leader in transporting hazardous and non-hazardous materials across the United States and Canada, Usher is always looking for new, great members to join its team, and is accepting applications online at https://www.ushertransport.com/careers/. Although Usher is a nationwide carrier, most drivers spend fewer than two nights a week on overnight travel, with the bulk of loads being trips of a day to a day and a half.

Drivers must be at least 23 years of age, and hiring criteria depend on the position. To become a Regional Chemical Driver-Owner Operator, candidates require one-year verifiable Class A driving experience, a valid Class A commercial driver’s license, hazardous material endorsement for all hazmat shipments, five jobs or fewer in the last 10 years preferred, and some other qualifications.

Recalling a time when he was head of Atlas Oil Company in 2017, Robert Kenyon testifies to how Usher was there when four major hurricanes devastated the lives of millions of people in Texas. Parts of the state were without supplies for weeks in the wake of Hurricane Harvey.

“Through these challenging times, Atlas Oil Company’s Emergency Fueling Team relied on you to help those left in the dark after the storms,” Kenyon told Usher and the people at the company. “When Atlas Oil sprang into action for a record-breaking quadruple deployment, you and your team did not hesitate to join the life-saving efforts.

“Your hard work, camaraderie, and collaboration are greatly appreciated, not only by the Atlas team but by those whose lives were touched by the efforts of your drivers.”

As proven over and over, with its many dedicated staff and impressive fleet of vehicles, Usher Transport is always there for its customers through times good and bad.