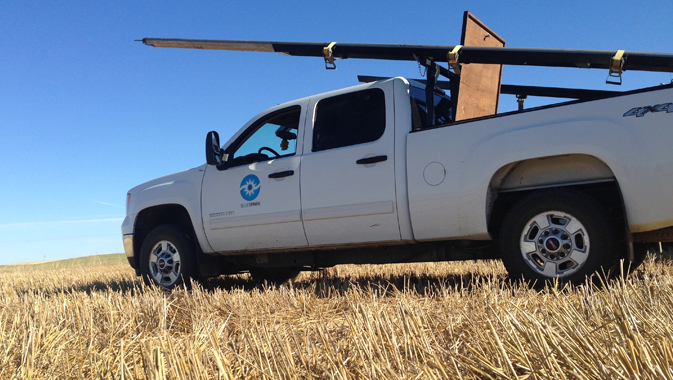 Accelerating the production and recovery of oil wells in an economically viable way is a mission that many energy companies seek to accomplish. Blue Spark Energy is a company that helps the oil and gas industry do this with its innovative WASP® (Wireline Applied Stimulation Pulsing) technology…
~

Headquartered in Calgary, Alberta, Blue Spark Energy started in 2011 when the concept of WASP® technology was in consideration and the company brought the technology to the market. WASP® is designed to enhance oil flow in new or poorly producing wells; recover reserves from non-producing wells; and increase flow in injector and disposal wells. We spoke with company CEO Todd Parker about Blue Spark Energy and this exciting WASP® Technology.

“Think of a cell phone battery and the timeframe that it lasts,” Parker explains. “If you use it for days on end, it means you’re using low power; but take that energy from the battery and use it in a billionth of a second, you’ll get an incredibly high burst of power. That’s similar to how WASP® technology works.”

The Technology works by using small amounts of electricity to create powerful hydraulic impulses to stimulate flow in oil wells. Oil flow is improved by delivering rapid, high-power impulses at the precise depth where blockages exist. Each hydraulic impulse is a high power shockwave travelling at more than 1,500 metre per second. This shockwave is followed by a 10,000psi high-pressure pulse. The shockwave and pressure pulse opens existing fractures or creates new near wellbore fractures to dislocate any blockage at any depth. WASP® can stimulate up to four metres per hour, and most operations are complete within one day, saving both time and money for companies that utilize WASP®.

Essentially, the producing wellbore is a long and narrow tube from which you extract hydrocarbon from a reservoir. “It appeared to us immediately that our power conversion technology could be used to transmit low amounts of energy to the rock face where high power is needed; these small amounts of electrical energy can be turned into 200+ megawatt power events,” Parker explains. “We built the prototype equipment in 2011. I was the first employee and started hiring additional people to go to oilfields in Canada to launch the prototype service to see if it could be deployed safely and effectively.”

After initially applying WASP® to “left for dead” well bores, the first well started flowing back fluid, proving that the technology worked. “That proved to companies that WASP® was fast, easy and safe for them to use,” says Parker.

By 2012-2013, Parker and his employees began to demonstrate their technology and went about seeking companies who could use it. “The trick with our service is that we just don’t rely on single-pulse; it’s about the intensity of the power and reliability of multiple repeated pulses. The mechanism of WASP® enables us to deliver these high-pulse power events.”

The company has successfully expanded, working on commercial operations, and by 2013, 2.75” WASP® systems were introduced to companies throughout Canada, in the Permian Basin (Texas), in California, and in Norway (North Sea).

Parker credits that to the technology of WASP®. “The technology did what it said. It opened connections to reservoirs, it’s low risk, and it’s safe.”

Active in three countries, Blue Spark Energy now has 25 employees and is growing quickly. This year, the company is sending out WASP® technology to sites in Latin America, Kuwait, Peru, and Indonesia. “The desire for this technology is something we’re seeing an uptick on because it’s low risk and low cost and that has been resonating with customers,” shares Parker.

Naturally, many companies are closely considering their bottom line, and the team at Blue Spark feels WASP® is a great way to help companies save money and expand the life of an oil well. “Today, people are thinking about production, economics, and the environment. It may be okay to drill wells to improve production but if there is a turn in the industry and oil prices decline… these companies will have to think about whether or not a well needs to be drilled versus, ‘how can we get more from a well that has already been drilled?’ WASP®® gives these companies options to look at existing reservoirs and see how much more production can be added to them.”

Blue Spark has embarked on a number of successful projects in its brief history, and Parker feels that the company’s principles of honesty and directness are what has helped it grow so quickly. “We are a ‘do what you say, say what you do’ company,” he says. “What’s been surprising to our customers is that we’re probably the first group to tell a customer whether or not our product will work, and we would rather tell them it’s not going to work for their situation than show them it won’t. We emphasize a culture of responsibility and respect and work collaboratively with our customers. We don’t want to leave any element of doubt. We’re hungry for success in relationships by doing the right job at the right time.”

A recent example of a successful project was the unblocking of a section of sand screen across a production zone in the North Sea off the coast of Norway. Plugged by barium sulfate scale, this poorly producing offshore oil well on the Norwegian continental shelf needed a cost-effective solution. Due to its location, conditions, and previous production rates, other intervention methods were uneconomical. WASP® technology was deployed via wireline to treat the sand screen and clean a section of perforated liner; both treatments were accomplished in the same run in the hole and well uptime increased by 68 percent.

Another project involved the unclogging of thermal heavy oil wells blocked with organic material and fine sediments in California. Previously, acid stimulation had provided only short-term, limited results. WASP® was quickly applied to the gravel pack production interval in several trial wells and was treated with pulse technology at 15 minutes per metre. After treatment by Blue Spark, oil production was five times greater.

“Blue Spark provides services that need to be deployed for the well-bore,” Parker explains, “increasing production and removing debris all the while doing it safely, economically and in an environmentally responsible fashion are important; overcoming these challenges, finding more wellbores and fitting our tech within them. The concept is taking new technology with a large amount of power, pulsing intensity, and packaging that power to fit through narrower tubing which allows customers to become more efficient and have less preparation at the well site. This will help continue to make treatment more effective and rapid.”

Indeed, Parker feels that WASP® speaks for itself and that’s what has made it so appealing to customers so quickly in the market. “Companies have an appetite for change,” he believes. “What we’ve seen is that this is an effective treatment that has positive effects and the technology is tested and tried. There is often an inertia for producing companies to do tomorrow what they need to do today. It’s about doing a better job of understanding current challenges; we walk a mile in their shoes. Our goal is to help foster change within an organization and improve overall performance.”

Quickly establishing relationships with partners has enabled the company to grow, and maintaining them is key. “Our business is of a collaborative nature,” says Parker. “As a startup, we have brand new technology in the market so building trusting relationships with clients was very important – we’d even advise customers to do something different than what we do if it’s a better alternative. We’ve established what our challenges are and we are very much in a position to listen to solutions to offer and try new things.”

Streamlining operations is one example. “We made the decision that we wouldn’t invest in IT infrastructure. We’re not an IT company and it doesn’t necessarily bring value to us, so we use cloud based infrastructure to help us realize that goal and we have software packages within that cloud technology. We’ve learned to identify our core strengths, know what works well, get feedback and continuously improve.”

Additional plans for Blue Spark include the deployment of a 2⅛ inch version of the tool with the same power and reliability, just able to be deployed through much smaller tubing, reducing economics. “Once delivered in 2015, we’ll continue to improve our customers’ economics for near wellbore remediation. As we bring high-power pulses that are repetitive in nature, we find that our customers want additional applications that don’t necessarily reflect mature wellbores with blockage.”

Blue Spark is also looking at where conventional treatments and logistics to effectively unblock wells in remote areas in locations where WASP® can be deployed with a rapid response.

In its three year history, Blue Spark Energy has quickly grown to become a successful company with its WASP® Technology. Parker is looking to expand the company and help save more energy companies money. “If we were to boil it down, Blue Spark offers a new way of solving the age-old problem of poorly performing wells,” he says. “We’re a low-cost, low risk company and more operators should look at WASP® Technology. We are a dynamic and engaging company willing to look at opportunities and problems, build trust, and solve problems. We’ll tell you what’s possible and make it happen.”