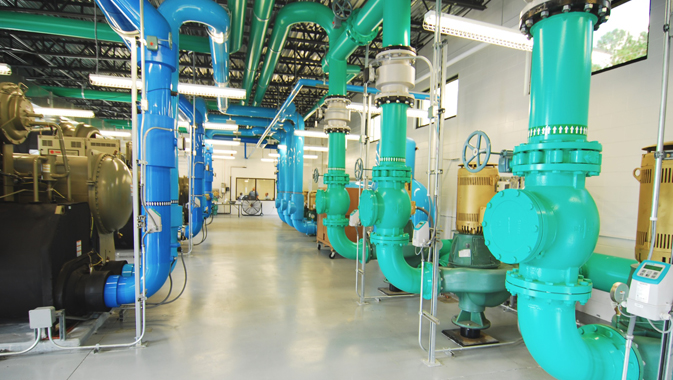 A full-service mechanical contractor approaching a century in business, Alabama-based James B. Donaghey, Inc. has earned a reputation for outstanding service and on-time, budget-conscious completion of work.
~
The company’s extensive work ranges from HVAC and design-build / design-assist to sheet metal fabrication, pipe fabrication, industrial ventilation and preventive maintenance. Its host of plumbing and piping services include underground piping, medical gas and process piping.

The business has grown considerably since it was founded by James B. Donaghey in Mobile in 1921. Initially established as a private plumbing repair and contracting business, the company increased its service offerings, expanding into industrial and commercial markets.

In the 1930s, a heating installation division was formed. In the 1940s, the business became a leader in south Alabama in the installation of central air-conditioning systems. In 1958, the company was reorganized as it expanded into commercial and industrial markets as James B. Donaghey, Inc. Mechanical Contractors, and a sheet metal fabrication shop was added to the Mobile office.

The company is entering its fourth generation as a family-owned and operated business. James Donaghey’s son, Bradley, joined the company in 1953. Bradley Donaghey is still with the company, serving as chairman of the board as well as a mentor and inspiration to the next generations of the enterprise.

“Bradley is a great asset and has seen a lot of different things. This is one of the advantages of being a family-run business,” says Vice President Bob Clapper.

Bob Clapper completed his degree in mechanical engineering at the University of South Alabama. He started with James B. Donaghey in 1976 and married Bradley Donaghey’s eldest daughter. One of the company’s other partners, Joe Vallee, is married to Donaghey’s youngest daughter. Along with sons of the previous owner, M.J, Sanders, Judson Sanders and Bradley Sanders, the company is very much a family affair. In fact, Clapper’s son-in-law, John King, now works for the company along with Vallee’s son, Jack.

“We’ve done it that way since 1921, so we don’t see any reason to change it now,” says Clapper of the company, which continues to build on its ninety-four years of successful operation.

James B. Donaghey Inc. remains firmly based on the principles set forth by its founder: ingenuity, integrity and high-quality customer service. Today, the company has three offices and 95 highly-skilled employees from a range of fields, including welders, pipefitters, plumbers, sheet metal workers and refrigeration technicians.

By having all these specialties working directly for the business, James B. Donaghey is better able to serve the needs of its customers immediately, rather than having to subcontract out particular trades. For clients, the comprehensive abilities reduce downtime and increase efficiency since they are working with just one contractor, not numerous trades.

“We really feel that being a full-service mechanical contractor means we can manage projects a lot better,” states President Judson Sanders. “We can resolve any conflicts between the duct and the piping or the plumbing and the sheet metal. It is a much better approach, rather than having a separate HVAC, a separate plumber and a separate piping contractor.”

Union contractor James B. Donaghey Inc. works in close collaboration with unions that have five-year apprenticeship programs, and it holds state licenses for Louisiana, Mississippi, Alabama and Florida. Providing the highest-quality training possible is necessary in today’s fast-paced world of construction, where workers and companies need to keep up with changes in technology.

Just as important as investing in technology is investing in people. As a full-service shop hiring union workers, the company respects not only its many clients but all staff, ensuring they are qualified and work in a safe environment. According to Clapper, qualified employees must be high-quality, smart, honest and highly competent in their field. Since the company’s service offerings are varied, the right fit for James B. Donaghey is a worker who enjoys taking on a range of projects.

“You’re not doing the same thing every day as if you worked in a plant. You have to be adaptable and committed to doing a good job,” he states. Although he has been with the company for thirty-nine years, Clapper says there are in fact others who have been with the company even longer. “We have good people, and we keep them. That’s our secret.” Many staff have already put fifteen to twenty years into the business. Management personnel are not limited to family members. Pat Mrachek, who manages the Pensacola office, and Ed Lampa, who is the Engineering Manager, are critical to Donaghey’s success.

Through a combination of talented personnel and strategic locations, James B. Donaghey Inc. can respond quickly and efficiently to work with clients on projects requiring HVAC, plumbing, sheet metal fabrication and more. In addition to its headquarters and sheet metal fabrication facility in Mobile, the company has other locations in Biloxi, Mississippi and Pensacola, Florida.

The company works on anywhere from 50 to 120 projects at any given time, with jobs ranging from $1,000 to $20 million. It operates primarily along the Gulf Coast of Mississippi, Alabama, Louisiana and Florida. Currently other projects are located in Portland, Texas and Fort Rucker, Alabama. The company’s facilities, including a 14,400 square-foot sheet metal shop, a 2,200 square-foot welding shop and a 9,000 square-foot piping fabrication shop, make it well-equipped to take on a range of projects.

James B. Donaghey uses time-tested engineering methodologies and industry knowledge to provide effective building system solutions that are created on-time and on or under budget. Its mechanical construction experience encompasses a broad range of industrial, commercial and institutional projects.

It is qualified and able to take on a variety of challenging jobs and does not limit itself to any one sector or type of work. The company’s work can be seen in a number of market sectors, including healthcare, industrial and manufacturing facilities, commercial structures, military, casinos, government, schools and multistory buildings.

Projects include: a central energy plant for Providence Hotel, a hotel guest tower for the Hard Rock Cafe, mechanical renovations at the University of Mobile and HVAC upgrades for the Power South Energy Cooperative.

Seizing opportunities when they present themselves, the company has purchased several properties in the midtown Mobile area as they became available. One of these, a hospital-owned former day care center, was renovated into a fabrication shop.

The company takes pride in all jobs, regardless of size. “If someone wants us to do a $20 million job for them, we’ve also got to be able to do a $1,500 job,” comments VP Bradley Sanders. The company also works on about fifteen to twenty maintenance contracts at any one time and has 24/7 phone answering service technicians to meet the needs of customers.

Priding itself on its ability to work with any client, the company’s solutions range from emergency repairs to custom-designed and built packages, which the company can then install and service. Pre-planning, along with daily reviews of each and every project and working to the satisfaction of the owner is vital to its success.

The company is also equipped to work within tight time parameters if necessary. This happened with the Grand Casino, one of the first casinos constructed on the Gulf Coast. In just over three months, it ensured the HVAC and plumbing systems were properly installed and that the casino was fully operational in time for its opening. The company accomplished what would have been impossible for many others.

Many staff lived in trailers for the duration of the build. The speedy access to materials and additional experienced staff ensured the project would be completed on time. Although the project was built rapidly, James B. Donaghey Inc. strictly adhered to safety regulations. To this day, the company remains enormously satisfied with its involvement in the project. “That went straight to the work we did, so we were always proud of that,” states VP Joe Vallee’.

An eight-time winner of the AGC Construction Safety Excellence Award for the high caliber of its work, the company has also been recognized as 2014 Specialty Contractor of the Year by the Subcontractors Association of Alabama.

A large part of the company’s strength and success comes from its family ownership which enables it to be extremely flexible and adaptable. Years ago, much of James B. Donaghey’s business came from industrial clients. While that was replaced by hospital and healthcare work, it is seeing growth once again in the industrial arena, including several new plants in the area.

“We have four owners here, and we are fortunate in that all four are family and really pull their weight,” says Clapper. “Everybody has their own little niche. I’m a professional engineer. Some of us are really good at estimating. One is really good at design/build. We work really hard, and we complement each other.”