A Range of Molding Capabilities 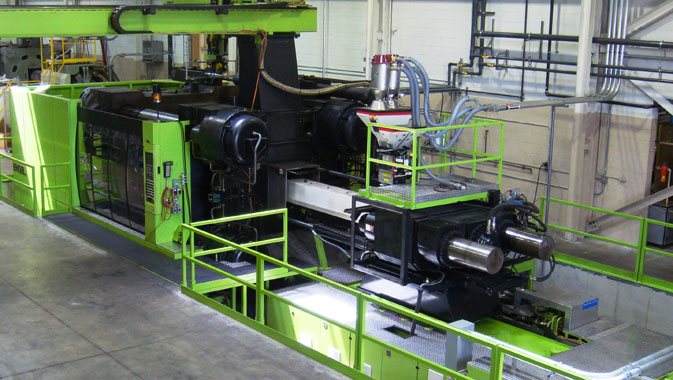 In business, to be the best year after year takes skill, experience and a team of employees with an unwavering commitment to superior customer service…
~
The City of Windsor, Ontario, is home to automotive giants, tool shops and parts suppliers and is the base of Lakeside Plastics Limited. This award-winning company was created almost forty years ago and has grown considerably over the decades. It proves itself repeatedly to customers through its top-quality molded products and equipment and its experienced staff.

Lakeside Plastics Limited owner Robert Luckino had experience in industrial design and working in tool shops prior to starting the company, in 1977. He had purchased a small press in Toronto and was driving back to Windsor when his vehicle broke down. He called a friend to help and the press and trailer were hitched to a tractor and hauled into a barn in Harrow, a farm community near Windsor. He set up shop in the area and the company’s early years were spent making small items, such as fishing lures and toys for fast food giant McDonald’s.

Initially, Luckino operated the business by himself. Today, the staff has grown to about 350 full-time employees in a variety of disciplines from press operators, skilled trades and maintenance people to quality technicians, engineers, program managers and estimators. Employees tend to remain at Lakeside Plastics for not only years, but decades. In fact, the company’s first employee recently retired after almost forty years.

“In Windsor, we are located in one of the key industrial centers surrounded by local support businesses including numerous tool, mold and automation equipment manufacturers,” says company president Bob Echlin.

“The main plant and off-site facilities are directly off Highway 401 that runs east to Toronto and west to the United States via Detroit, Michigan. It’s an ideal location for this business.” Its facilities now have a total of 246,000 square feet, which includes a distribution center, manufacturing areas, corporate offices and engineering.

There are many thousands of components used in the assembly of automobiles today. The company is actively producing more than five hundred different parts right now and uses a sophisticated ERP (Enterprise Resource Planning) system from Epicor to manage production. Company schedulers look at customer releases, machine times, materials, labor, packaging and a host of other variables which, says Echlin, is akin to air traffic controllers in a flight tower. Key decisions, such as how long something will run and when will it come out, all lead towards fulfilling customer requests on time.

The company’s first foray into automotive parts was in 1993. A few years later, in 1996, Lakeside took on an emergency tool transfer from Delphi – a leading worldwide supplier for the automotive and commercial vehicle industry. Lakeside did such a tremendous job with the Delphi transfer that GM started sending more work Lakeside’s way. By the end of the 1990s, Lakeside was creating parts for the Chevy Lumina, Buick LeSabre, Pontiac Bonneville and Chevy Silverado. In 1997, the company won its first of many GM Supplier of the Year awards. Lakeside Plastics remains an automotive plastic injection molder of choice for customers such as General Motors.

Lakeside has created twenty-five goals in the pursuit of unparalleled quality and productivity. Developed by the entire leadership team, some of the goals are long-term, some are short-term, yet all are reviewed and updated regularly because business, like life, is ever-changing.

“We assign metrics and delivery dates, so they are actionable goals,” says Echlin. “They cascade down throughout the organization to the department level then to the project team and individual level.”

As president for the past three years, Echlin brings considerable industry experience to Lakeside Plastics. Prior to coming to the company, he owned a medical device business that was bought out by a private equity firm in 2011. That business had a proprietary, thin-film heating technology that was designed into hypothermia management products largely for the military and emergency medical services markets.

“I have a long history with the automotive business that started with owning my own mold shop and plastic injection molding business back in the mid-1980s,” he says. “We were making injection molds for Ford and Chrysler and forging dies for TRW (automotive component supplier TRW Automotive) and also manufacturing plastic molded parts and assemblies for those same companies plus a few others.”

Today, Lakeside continues to be recognized for its superior-quality products and customer service. Among the company’s many awards are the General Motors Supplier of the Year for 2009, 2010, 2011 and 2014. Presented to only a handful of companies – in 2014 only seventy-eight out of the many thousands of GM’s global suppliers – the Supplier of the Year Award is truly an achievement. However, the company exceeded its own expectations when it won what has become known internally as ‘the General Motors trifecta’. For its performance in 2014, Lakeside received three awards from GM: the GM Supplier Quality Excellence Award, the GM Customer Care & Aftersales Platinum Award for Delivery and the Supplier of the Year Award.

“So, if you think there’s only a fraction of suppliers that won Supplier of the Year, there’s even a smaller group that would have won all three awards in a year, so we had a stellar year performance-wise. It’s something we’re all very proud of,” comments Echlin. The company’s achievements were based on factors such as quality, technology and innovation, service, support and, of course, competitive pricing.

To compete against larger automotive injection molders, Lakeside has created an ideal niche for itself by focusing mainly on vehicle interiors. “We do a lot of vehicle interior garnish trim parts. If you’re sitting in the driver’s seat, this would be basically everything on the sidewall of the vehicle, except the door trim panels,” says Echlin.

To make its products, Lakeside has an extensive range of equipment and machinery. This includes forty-five injection molding machines with capacities ranging from thirty tons to 3,500 tons. “This allows us to create massive parts, and it gives us a wide range of tonnages and capabilities.”

While the company’s biggest customer at present is General Motors, Lakeside Plastics also works with other automotive manufacturers including such companies as Johnson Controls, Nexteer, Autoliv, TRW and Wooshin Safety Systems.

Lakeside is often called in at the design stage to provide valuable input and advise how parts and assemblies can be best designed for manufacturability. Depending on the purpose of a part, some have unique requirements – such as coverings over airbags which must be able to detach yet cannot act as projectiles in the event of a collision.

With automobile manufacturers like GM being governed by organizations such as the Federal Motor Vehicle Safety Standards (FMVSS), there is a great emphasis on safety and quality. To ensure all products meet exacting specifications, Lakeside has made a considerable investment into its automation equipment, which is the first line of defence in guaranteeing quality.

During the manufacturing process, machinery equipped with cameras, sensors and other detection devices will identify potential issues. This is followed by highly trained operators who handle the parts and perform in-station quality control, in which each operator is responsible for the parts he or she lets through the station.

“Typically, you have the person inspect what they are doing and inspect the person just before them and what they did, so each item is being looked at multiple times,” comments Echlin. The company also performs layered audits, in which everyone in the business – including management – takes part in the quality system on a rotating basis.

Lakeside Plastics has intensive staff training, but ensuring quality begins with the selection of the right people. The company even has a fifty-seven-step process – including a dexterity test – to hire an operator to run a machine. To achieve exceptional service, quality, reliability and on-time/on-budget delivery, Lakeside fosters an environment based on the pillars of teamwork and fair play.

“We are very careful about who we hire, make sure it’s going to be the right fit, and, once they start, we have a well-evolved training program that everyone on the floor goes through, including quality training, safety training, a basic understanding of injection molding. It’s really well done,” says Echlin. “New Production Associates are teamed-up with a trainer, and it is one-on-one until they sign off that that person can have less oversight and are eventually weaned off after four to eight weeks.”

Lakeside’s greatest resource is its people. The turnover rate is extremely low, grievances are very few and the company’s unparalleled commitment to a safe workplace – through a joint health and safety committee – has seen zero critical injuries in almost forty years of business.

“We work very hard at engaging our people, training them, giving them a safe environment and job security – everything we can do to keep them safe, satisfied and motivated,” states Echlin.

The company, which is always looking for new customers in both automotive and non-automotive industries, knows the importance of retaining its loyal and skilled employees to remain a cost-competitive manufacturer of extremely high-quality automotive components.