If You Love Pasta, You’re Covered! 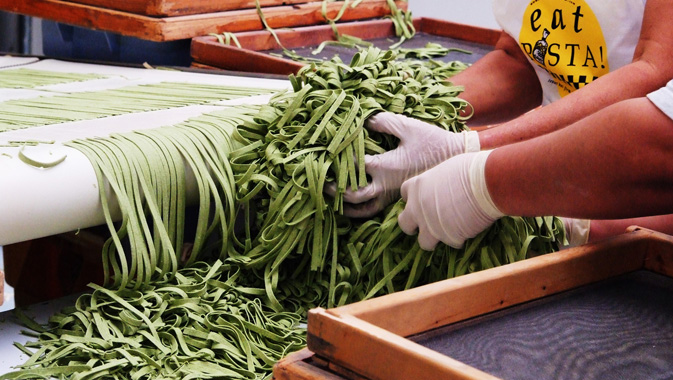 For Al Dente Pasta, its thirty-four year journey is a story of passion for good food, the drive to succeed and the ability to overcome circumstance while remaining true to the values upon which the company was founded.
~
For Monique Deschaine and her husband Dennis, pasta is not just a business, it has become a way of life. From a very young age, Monique understood the complexity of flavors and the uniting force of food. With the founding of Al Dente Pasta Company she had the opportunity to share that with the world-all the more remarkable in that she had no business experience, no start-up money, wasn’t of Italian heritage and had never made pasta before!

Drawing on the advice of some of her closest friends and mentors, Monique knew that to compete in the market, they would have to create a specialty product. They would also have to be willing to do what larger manufacturers could not do in terms of crafted quality. The result has built a business that fits her goals and her personality while appealing to a broad consumer base.

From the beginning in 1981, Monique’s husband, Dennis has played an integral role in the company. Along with her sister, Nanette they have worked together as a family to build Al Dente from the ground up into the success that it is today.

Monique and Dennis infuse flavors and hand-made quality into their dried pasta, which is made in small batches and slow dried to maintain optimal nutrition. The traditionally rolled or sheeted pasta brings all of the rich characteristics of fresh-made fettuccine, linguine and pappardelle to your plate in only three minutes of cooking time for a result that is “tender, but firm”.

Unlike larger manufacturers that extrude dough, Monique adopted a more traditional approach, learning from the woman who brought Italian cuisine to America: Marcella Hazan. “She taught me about sheeting the pasta, rolling the dough out. That is the way an Italian grandmother makes her pasta, and if I was able to duplicate that, then I could set myself apart from the large commercial companies,” Monique said.

Al Dente Pasta Company is built on the Deschaine duo’s creativity, penchant for product development and perseverance. Always in tune with the changing trends in American cuisine and marrying a host of flavors, they have been true pioneers in the pasta world. Al Dente Pasta has several exciting product offerings made from only the freshest, highest-quality ingredients and created using traditional pasta making processes.

Over time, Al Dente has expanded its product range to include pasta alternatives for those with dietary restrictions. Al Dente’s Carba-Nada is perfect for those with diabetes or low-carbohydrate diets. Its BonaChia line draws from the superfood chia to replace the use of eggs, making a high-quality product for those who practice a vegan lifestyle.

Al Dente is also proud to announce its new line of gluten-free spirals. Free from gluten but full of flavor, much work went into achieving this line made from white bean flour and brown rice flour. Also produced in a certified gluten-free facility, this kosher and GMO-free product meets Al Dente’s highest standards of flavor, quality and nutrition.

From fettuccine, linguine, pappardelle and whole wheat pasta to specialty pasta, Al Dente brings flavor combinations to life while drawing on cuisines from around the world. Some of its varieties include spinach, egg, garlic/parsley, basil, three pepper, lemon pepper, red chili, squid ink and spicy sesame.

Al Dente uses local ingredients, where possible, including its white bean flour from Michigan; eggs from a smaller-sized farm in Indiana; and the best Durum wheat the United States has to offer from a North Dakota cooperative.

Products like squid ink and porcini paste have international origins but are from certified distributors with which it has relationships. Monique and Dennis place great emphasis on their relationships with suppliers and distributors which have helped establish a name for quality and expand the company’s reach in the market.

Available from an always growing number of stores and via its strong online sales platform, Al Dente Pasta reaches markets in all fifty states as well as across Canada, Mexico and even the Caribbean. Monique’s sauces make a perfect accompaniment. Marvelous Marinara, Outrageous Olives & Capers and Luscious Leek & Sundried Tomato, make for an all-natural, nutritious, easy and flavorful meal that can be on the table in just minutes.

As a little girl, Monique had the opportunity to spend summers with her grandparents and family in France. During her visits, in the early 1960s, she tasted flavors and experienced a world of flavors America had yet to experience. Monique recounts fond memories of making homemade mayonnaise with her grandmother and tasting fresh-from-the-river trout cooked with almonds.

By the time she reached her twenties, food and cuisine in the United States was beginning to change. When the food revolution began, in the mid to late 1970s, she was right in the middle of it, working for a cutting-edge, Italian-inspired café and music venue as she pursued her degree in psychology. She remained there until the takeoff Al Dente in the early 1980s.

She had the opportunity to present her business plan to Sandy Cooper, one of the foremost foodies and food entrepreneurs in Michigan at the time. Sandy gave her an opportunity to learn the ins and outs of the food business while working at her iconic Ann Arbor food store which was the first to introduce croissants and other fine foods to the area.

After a year working for Sandy Cooper at Complete Cuisine, Monique was ready to embark on her own journey in the food business. Sandy brought Monique to New York where she would purchase her first pasta machine, and it was there she would have the opportunity to learn the tradition and craft of making homemade pasta from Marcella Hazan.

“We never thought we would be doing this business for thirty-four years. When I started, I was just doing it for the time being, and when people would ask, ‘Where do you see yourself in five years?’ I would respond, ‘I have no idea!’” said Monique. “I did it for the passion, the fun of it, to build something.”

Deschaine and her husband Dennis literally built Al Dente from the ground up. In 1983, with the help of friends and other investors, they purchased land in Whitmore Lake, Michigan. The idea was to combine their two businesses – windsurfing and pasta – under one roof. A builder by trade, Dennis constructed what would serve as the shared headquarters for Al Dente Pasta and his windsurfing company.

In 1987, the couple had their son and their priorities began to change. Understanding that they needed to plan for their family and the future, Dennis joined Al Dente full time, de-emphasizing the windsurfing business. In 1993, the headquarters were devastated by fire, and the decision was made to focus solely on Al Dente moving forward.

The factory was underinsured, as the Deschaines had no idea of the value of the business they had built with sweat equity. “We didn’t know what it would cost to replace everything new and very quickly. We had grown the business one bag of pasta at a time. We had made all the drying racks. Dennis had designed and built the drying rooms. We did not know the value of our company at that time,” Monique said.

Luckily, before the fire, they had purchased a new piece of equipment that would not fit through the doors of the factory. As a temporary solution to this problem, the machine was kept in storage nearby and was not destroyed in the fire. This ultimately served as the saving grace for Al Dente Pasta. The company was able to set up shop temporarily in another warehouse. With the loyalty of its customers and employees, Al Dente Pasta was back up and running in only a month’s time.

Monique has a very positive attitude. “Being able to envision the solution to the problem and then being able to get to where you want to go,” is something from which she draws great strength. Despite the hardships the Deschaines have experienced, they have been able to pull together, with the help of their employees, family and friends.

The Deschaines also faced challenges in the naming of their products. When Monique first started the company, Al Dente seemed to be the perfect name for a pasta company. She didn’t realize that a descriptive name would be difficult to register. Eventually after many years, they did acquire the registered mark for Al Dente for dried pasta.

Moving forward, the next steps for Al Dente includes the development of series of short videos that will help to bring Monique’s style of nutritious, delicious, easy and quick cooking to the greater public. Her “3 in 3 recipes” have three ingredients and take three minutes to prepare with delicious results. Some of Monique’s recipes can be found on the company website.

“The concept of food bringing people together is one of my top priorities, and just that idea, is what inspired me to go into a food business,” Monique explained. She loves the dining experience and sharing food with friends and loved ones. It is this passion that helps her create pasta that tastes just like homemade but has the convenience of being cooked in just three minutes for an extraordinary meal.