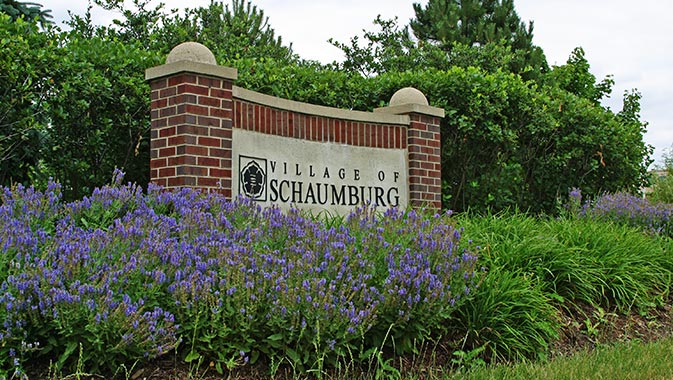 Imagine that you are about to start up a business. You need a test market – a place that is both business friendly and has the demographics required to gauge the potential for success. Schaumburg, Illinois, is that place.
~
Schaumburg is the largest center of economic development in the state outside of Chicago, and we spoke with Assistant Director of Community Development / Economic Development Manager Matt Frank to find out why.

Schaumburg is a northwestern suburb of Chicago and was incorporated in 1956. Schaumburg started as a small German farming community, but with the advent of the expressways and the modernization of O’Hare International Airport in the sixties, Schaumburg became one of the fastest growing cities in the United States. After transportation improvements and the development of Woodfield Mall in the early seventies, large areas were designated for office, retail and manufacturing. That development led to a significant shift making Schaumburg one of the leading edge cities in the U.S.

The population of Schaumburg stands at about 75,000, but, during the day, that doubles due to all of the employees, students, shoppers and tourists who come to the village. “We are the second largest economic center in Illinois. There are about 80,000 people that work in Schaumburg, and we do about $3 billion in retail sales as well. We are a very large shopping community.”

To attract economic activity and business to the village, a new tax increment financing (TIF) district has been developed called 90 North, which is located north of I-90. It was created with over 1,000 acres of property near the village’s convention center to help benefit businesses and the village economy.

The village has thirty million square feet of available commercial development space. Development within the new TIF district will be accelerated as a result of area infrastructure improvements. Brand new ramps are being constructed along I-90, which runs from Rockford to the City of Chicago with a stop at O’Hare International Airport. Schaumburg is intersected by this major corridor so these new ramps will create access to its industrial parks, Woodfield Regional Center and office campuses.

“That’s a huge incentive for us to ensure that the infrastructure is in place that will accelerate growth in the area,” said Matt Frank, Schaumburg’s Assistant Director of Community Development and Economic Development Manager. “In order to attract business here, we have started with two major deals. Zurich (Insurance Group) has a large financial headquarters located in Schaumburg. They were shopping throughout the region and we were able to convince them to invest $300 million in a new headquarters facility.”

This achievement was made possible because of an incentive through the TIF district. Schaumburg is sharing some of the TIF income that it would generate to assist companies to move to the area.

Another business that the village has worked with is dental hygiene manufacturer Sunstar which was looking for new headquarters for its 350 employees. The company is currently located in Chicago, but Schaumburg was able to work out a $3.5 million deal to attract it to a site within the village. It helped to pay for some of the infrastructure and soft costs to aid in building the $45 million headquarter facility at Roselle Road and I-90.

“So these are two major corporations where we used TIF financing to help attract these businesses to Schaumburg,” Frank said. In terms of getting more businesses, we see this as a bit of a domino effect.”

Schaumburg is home to a wide variety of corporate headquarters such as Catamaran Corporation, Pepsi, Motorola Solutions and GE. The village hopes to be able to attract corporations that are looking to relocate or expand.

“We are providing incentives on a case by case basis,” Frank said. “As developers and businesses come to us with ideas, we are able to analyze and assess what makes sense and then incentivize them to locate in Schaumburg such as Zurich and Sunstar.”

The Golden Corridor Advanced Manufacturing Partnership is a regional partnership that is somewhat unique as three communities have come together. Schaumburg, Elk Grove Village and the Village of Hoffman Estates have worked to address issues arising with manufacturers. It was found that during business retention visits, the human resource directors or CEOs would mention difficulties in finding workers to fill certain vacant positions. So, a strategic alliance was formed to work with the manufacturers and area schools to help address this workforce shortage.

“We are working with junior highs, high schools and community colleges to offer internships, open houses and different seminars to get kids excited about advanced manufacturing careers,” Frank said. “These are good-paying jobs that do not require a four year degree.” Certificate programs are offered through community colleges so students can work their way through school. Manufacturers are willing to help pay for those programs. This makes it a win for everybody involved.

Due to the proximity of O’Hare International Airport and easy access from the expressways, many Japanese companies located branches in Schaumburg back in the eighties. That investment has since grown and the village has developed a reputation for being business-friendly, especially with the Japanese companies that have thrived here. The international integration into the business community has also crossed over to the schools.

Schaumburg is a very welcoming community and is the sister city to Namerikawa, Japan. There is also a dual-language program in its elementary schools that is teaching Japanese to schoolchildren. Not only does this program give valuable skills to children, but the efforts help build close ties and relationships. Japanese businesses can feel confident that investing in Schaumburg will pay off, they will be welcomed, and be successful in growing their business.

“Sunstar is a Japanese business; others that have opened recently including Takisawa (machine tools), Tacmina (metering pumps) and Shigiya (machine tools),” Frank said. “You get your foot in the door and work with them. They understand the benefits of locating to Schaumburg and being near O’Hare Airport, and there are services through accountants and legal teams that are familiar with international trade. So, we have several companies that are able to support these Japanese businesses.”

Trade shows are crucial for villages like Schaumburg. Village representatives attend the International Council of Shopping Centers (ICSC) and big retail shows in Chicago and Las Vegas. At these events, village staff works with national tenants, retailers, and hospitality businesses to help fill vacant sites. It is also an opportunity to build relationships with the real estate brokers and other attendees to ensure that Schaumburg is at the top of the agenda.

Businesses that come to the Midwest work with the Village of Schaumburg to establish test stores. A recent success can be seen with Pac-Man-themed restaurant Level 257 which is owned by Namco Entertainment. The company that invented Pac-Man was looking to introduce its first ever restaurant-entertainment concept and Schaumburg was its launching pad. Recently, people came from Japan to help celebrate the thirty-fifth anniversary of Pac-Man at Level 257.

“So, it’s new concepts for both retailers and the restaurants that come into the area. We had Medieval Times here when they were looking to go national; same thing with IKEA, which was a pretty big deal when they moved here. We were one of the first in the U.S. to have them,” Frank said. It is a great market because the entire Chicago region has convenient access to Schaumburg.

Schaumburg is a model place for companies to experiment prior to expansion. Woodfield Mall is one of the largest malls in the U.S., and it is a prime test site for new concepts from national retailers. Woodfield Mall brings in new tenants to see if the business model is viable. One such concept was The Rainforest Café which was only supposed to be a five-year test initially, but has been at Woodfield for close to twenty years and has expanded internationally.

So, what is it about Schaumburg that makes it such an ideal destination for businesses? It starts with demographics and its family–oriented nature. “We have high incomes here in the Schaumburg and Chicagoland market, so there is some spending capital that can be accessed to see if these concepts will work,” Frank said. “We also have a robust hospitality sector, so you will get not only residents, but also visitors and business travelers who are looking for options and they can take advantage of that.”

“What’s also unique is that we now have five hotels under construction, which is fantastic,” Frank said. “We will have over 5,000 guest rooms by the end of 2015 which rivals most major cities. We can cater to the business and leisure traveler who may come to see Legoland here in Schaumburg. Or, if they go to the racetrack at Arlington Park, or even just a weekend in Chicago, they can take advantage of that because of our offerings here in Schaumburg.”